Woe to you, Christian Zionists, hypocrites!

I love it when Christian Zionists invoke God’s Holy Word to justify the Israeli theft of Palestinian land, such as this from Reverend John Hagee: “Israel exists because of a covenant God made with Abraham, Isaac and Jacob 3,500 years ago — and that covenant still stands,” Mr. Hagee thundered. “World leaders do not have […]

I love it when Christian Zionists invoke God’s Holy Word to justify the Israeli theft of Palestinian land, such as this from Reverend John Hagee:

“Israel exists because of a covenant God made with Abraham, Isaac and Jacob 3,500 years ago — and that covenant still stands,” Mr. Hagee thundered. “World leaders do not have the authority to tell Israel and the Jewish people what they can and cannot do in the city of Jerusalem.” 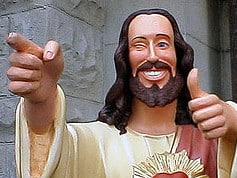 Hagee is a reverend, so I presume he’s actually read the Bible. His error thus cannot be attributed to ignorance, only to dishonesty. See, actually, that covenant does not still stand. Christian Zionists like Hagee often invoke the Bible as a cover for their agenda of violence, racism, and injustice. What they neglect to mention is that the Hebrews continually violated their covenant with Yahwah, the God of Abraham, Issac and Jacob (Israel).

Christian Zionists are fond of quoting passages from the Bible such as these:

“Then Yahweh appeared to him and said: ‘Do not go down to Egypt; live in the land of which I shall tell you. Dwell in the land, and I will be with you and bless you; for to you and your descendants I give all these lands, and I will perform the oath which I swore to Abraham your father.” (Genesis 26: 1-3)

“And behold, Yahweh stood above it and said: ‘I am Yahweh, God of Abraham your father, and the God of Isaac; the land on which you lie I will give to you and your descendants.” (Genesis 28:13)

But they willfully neglect to point out what happens later in the story:

“You shall therefore keep all My statutes and all My judgments, and perform them, that the land where I am bringing you to dwell may not vomit you out.” (Leviticus 20:22)

“But if you do not obey Me, and do not observe all these commandments … but break My covenant … I will bring the land to desolation, and your enemies who dwell in it shall be astonished at it. I will scatter you among the nations and draw out a sword after you; your land shall be desolate and your cities waste … You shall perish among the nations, and the land of your enemies shall eat you up.” (Leviticus 26: 14, 15, 32-33, 28)

“Therefore Yahweh was very angry with Israel, and removed them from His sight; there was none left but the tribe of Judah alone…. So Israel was carried away from their own land to Assyria, as it is to this day.” (2 Kings 17:18, 23)

“And I said, after [Israel] had done all these things, ‘Return to Me.’ But she did not return. And her treacherous sister Judah saw it. Then I saw that for all the causes for which backsliding Israel had committed adultery, I had put her away and given her a certificate of divorce; yet her treacherous sister Judah did not fear, but went and played the harlot also.” (Jeremiah 3: 7-8)

And, of course, the Israeli occupation and theft of Arab land violates these commandments:

And I love the part about the international community not having authority to tell Israel what or what not to do. It’s ironic Christian Zionists like Hagee invoke a covenant to justify Israeli crimes against Palestinians, and yet seem completely ignorant of the whole concept of a covenant when it stands in the way of their own, rather un-Christian ideologies and prejudices.

See, Israel is a member of the United Nations Covenant … er … “Charter” (same difference), as well as a signatory to the Geneva Conventions.

I also just love it when Christian Zionists invoke Romans 13 when it suits their purpose to interpret this is blind obedience to the state. For instance, back in 2002 and 2003, I was protesting the planned war of aggression against Iraq based on what were easily identifiable at the time as false pretexts (contrary to popular myth that it is only in hindsight that we can know Iraq had no WMD). I received numerous emails from so-called “Christians” citing Romans 13 in order to argue, essentially, that we must support the war effort because God commands it of us.

See, the relevant portion of that chapter, in which Paul addresses the people of Rome reads:

The trouble with using this verse within the context of a pro-war argument is that the government itself must be subject to proper authority. In the case of the United States of America, the government gets its authority from the consent of the governed, and there is a covenant between the people and their government. It’s this little thing known popularly as “The Constitution”.

That covenant mandates that only the Congress shall have the power to declare war. It also makes international covenants such as the U.N. Charter, the Geneva Conventions, and others to which the U.S. is a signatory, “the Supreme Law of the Land”. That means the U.S. is subject to the authority of the U.N. and the international law. By conspiring to wage a war of aggression based on false pretexts, the U.S. government violated its covenant obligations, both domestically and internationally.

Therefore, interpreting Romans 13 correctly, any true Christian who has not been deceived by the snake-venom of their apostate preachers would recognize that Yahweh indeed commanded something of His believers, it was (and is) to actively oppose the war. Those who do not, as is made clear from the Scriptures, are in rebellion against Him and His Word.

Romans 13 similarly applies to the situation in the Middle East, in which Israel remains in perpetual violation of its covenants with the international community, just as the Hebrews of old were rebellious against their covenant with Yahweh in all their generations.

Woe to you, reverends and preachers, hypocrites! For you shut up the kingdom of heaven against men; for you neither go in your selves, nor do you allow those who are entering to go in.

Woe to you, reverends and preachers, hypocrites! For you pay tithe of bill and coin and check, and have neglected the weightier matters of the law: justice and mercy and faith. These you ought to have done, without leaving the others undone.

Blind guides, who strain out a gnat and swallow a camel!

Woe to you, reverends and preachers, hypocrites! For you cleanse the outside of the cup and dish, but inside they are full of extortion and self-indulgence.

Blind preacher, first cleanse the inside of the cup and dish, that the outside of them may be clean also.

Woe to you, reverends and preachers, hypocrites! For you are like whitewashed tombs which indeed appear beautiful outwardly, but inside are full of dead men’s bones and all uncleanliness.

Even so you also outwardly appear righteous to men, but inside you are full of hypocrisy and lawlessness.

Woe to you, hypocrites!