The Propaganda Narrative of U.S. Withdrawal from Iraq

FPJ — The New York Times this week reports under the headline “Taking Lead, Iraqis Hope U.S. Special Operations Commandos Stay” that the security situation in Iraq “may be at risk now that American forces are withdrawing this year” as per the U.S.-Iraqi Status of Force Agreement (SOFA). “Even as few Iraqi politicians are willing […]

FPJ — The New York Times this week reports under the headline “Taking Lead, Iraqis Hope U.S. Special Operations Commandos Stay” that the security situation in Iraq “may be at risk now that American forces are withdrawing this year” as per the U.S.-Iraqi Status of Force Agreement (SOFA). “Even as few Iraqi politicians are willing to admit publicly that they need American help, Iraqi soldiers say that American troops must stay longer to continue training and advising”, the Times reports, citing “senior Iraqi military leaders” who “have advised Prime Minister Nuri Kamal al-Maliki that some troops should stay.” Naturally, “American officials have said they would agree to a such a request.” The article then goes on at length praising the abilities of the U.S. Special Operations units working with Iraqi forces. 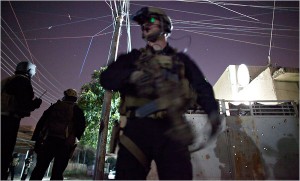 The general theme is a standard narrative for the U.S. media, as I have long observed: U.S. military forces are a stabilizing influence in Iraq; the security situation could deteriorate if the U.S. withdraws; and Iraqis want U.S. forces to remain in Iraq but their government is willing to risk a worsening security situation in order not to look weak and dependent. If there were a Pulitzer Prize for excellence in propaganda, the Times would surely consistently take home the award.

Noticeably and grievously absent from U.S. mainstream corporate media accounts like this one are the facts about what the Iraqi public actually have to say about the foreign occupation of their country.

A February 2004 poll by Oxford Research International showed that 39.5% of Iraqis supported the presence of coalition forces in their country, with 13.2% strongly in support, while a majority of 50.9% opposed the foreign occupation, with 31.3% expressing strong opposition.

In May 2004, a poll conducted for the Coalition Provisional Authority (CPA) showed that “80 percent of the Iraqis questioned reported a lack of confidence in the Coalition Provisional Authority, and 82 percent said they disapprove of the U.S. and allied militaries in Iraq.” Presumably referring to the same poll, the Telegraph reported, “More than half of Iraqis would feel safer without American troops in the country, according to a leaked poll showing that a mere 10 per cent now backed coalition forces.”

In May 2005, the Project on Defense Alternatives issued a report noting that opinion surveys had consistently showed that, “On balance, Iraqis oppose the US presence in Iraq, and those who strongly oppose it greatly outnumber those who strongly support it”, that “US troops in Iraq are viewed broadly as an occupying force, not peacekeepers or liberators”, that “On balance, Iraqis do not trust US troops, think they have behaved badly, and — one way or another — hold them responsible for much of the violence in the nation”, and that “A majority of Iraqis want coalition forces to leave within a year or less.” The report suggested that the U.S. occupation was instigating a “Vicious Circle” (the title of the report), wherein its presence and operations in Iraq were the very thing driving the insurgency.

A November 2005 poll by Oxford Research International showed that 32.2% of Iraqis supported the presence of foreign forces (only 12.8% strongly in support) compared to an overwhelming majority of 64.5% who opposed the occupation (43.7% expressing strong opposition).

A leaked August 2005 poll undertaken for the Iraqi Ministry of Defense, the Telegraph reported, showed that “up to 65 per cent of Iraqi citizens support attacks” on foreign forces (45% nationwide and 65% in the British-occupied Maysan province) and “fewer than one per cent think Allied military involvement is helping to improve security in their country.” 82% were “strongly opposed” to the occupying forces, and 67% felt “less secure because of the occupation”.

A January 2006 poll conducted by the Program on International Policy Attitudes showed that 80% of Iraqis believed the U.S. planned “to have permanent military bases in Iraq” and 76% believed the U.S. would not withdraw even if asked by the Iraqi government. 70% of Iraqis said they would like the Iraqi government to set “a timeline for the withdrawal of US forces”, 35% of whom favored a withdrawal “within six months”. Given a slightly different question, 87% of Iraqis said they would support a decision by their government to set a timetable for the withdrawal of foreign troops. 47% of Iraqis approved of attacks on occupying forces, 90% of whom believed “that the US plans to have bases in Iraq permanently” and 87% of whom believed “that the US would refuse to leave even if asked to by the new Iraqi government.” 67% of Iraqis agreed that if the U.S. was to withdraw within six months, the “day to day security for ordinary Iraqis” would improve, compared to only 30% who believed it would worsen. 64% believed that violent attacks would decrease if the U.S. withdrew, compared to only 35% who believed they would increase. 61% believed that ethnic violence would decrease if the U.S. withdrew, compared to only 33% who believed it would increase. 73% of Iraqis felt that factions would be more willing to cooperate in the parliament if the U.S. withdrew, and 67% felt that the availability of public services such as electricity, schools, and sanitation would increase. 64% believed the amount of crime would decrease with a U.S. withdrawal. 59% wanted the U.N. to lead the international effort for economic reconstruction compared to only 21% who felt the U.S. should take the lead role (18% wanted neither).

In September 2006, the BBC reported that a Department of Defense (DOD) poll showed that 75% of Sunni Muslims “now support the armed insurgency against the coalition”, compared to “14% in the first opinion poll the Defense Department carried out back in 2003.” (The U.S. onslaught against Fallujah in 2004 was attributed with greatly spurring the anti-coalition sentiment.)

Another poll the same month conducted by WorldPublicOpinion.org (WPO) in cooperation with the Program on International Policy Attitudes (PIPA) showed that 71% of Iraqis wanted the U.S. to withdraw its forces within one year, and an additional 20% wanted withdrawal within 2 years. Only 21% saw the U.S. military as a stabilizing force in Iraq, compared to an overwhelming 78% who believed that the U.S. presence was “provoking more conflict than it was preventing.” 79% said that the U.S. was “having a negative influence on the situation in Iraq” compared to just 14% who said “that it is having a positive influence.” 58% believed that if the U.S. was to withdraw within six months, it would lead to a decrease in inter-ethnic violence, and 61% said the day to day security situation for ordinary Iraqis would improve. A majority of Iraqis, 61%, approved of attacks on U.S.-led forces. 77% believed the U.S. planned “to have permanent military bases in Iraq”, and 78% believed the U.S. would refuse if asked by the Iraqi government to withdraw. Most expressed confidence in the Iraqi police and security forces to handle the job on their own.

A November 2006 poll by the Iraq Centre for Research and Strategic Studies covering the cities of Baghdad, Anbar, and Najaf found that nearly all respondents, 95.2%, felt that the security situation was worse than before the U.S. invasion. 50.7% wanted U.S. forces to leave “immediately”, and an additional 20.4% wanted the U.S. to “start to withdraw now according to a timed schedule”. 65.7% said that if the U.S. left, “The security situation will be improved and violence will be decreased”, compared to only 14.4% who said the violence would worsen.

A poll conducted in February and March of 2007 by D3 Systems for the BBC, ABC News, ARD German TV and USA Today, as the U.S. was implementing its “surge” of American forces into Iraq, showed that only 22% of Iraqis supported the presence of Coalition forces, while 78% opposed their presence, 46% strongly so. Only 29% felt the “surge” would make the security situation in Baghdad and Anbar better, while 49% said it would make it worse and 22% said it would have no effect. Only 21% felt overall that the presence of U.S. forces was improving the security situation in Iraq, while 69% said it was making it worse. 77% said the U.S. was playing a negative role in Iraq, compared to only 12% who perceived it as positive. More Iraqis blamed the U.S. for the violence in the country than any other contributing factor.

In May 2007, an Opinion Research Business (ORB) poll showed that only 16% of Iraqis believed the surge would improve the security situation in Baghdad (4% “a great deal better” and 12% “somewhat better”), while 69% believed it would only serve to escalate the violence (20% “somewhat worse” and a whopping 49% “a great deal worse”).

In December 2007, another ORB poll prepared for BBC Newsnight showed that only 5% of Iraqis in Basra believed a continued presence of British troops there would improve the security situation there, while 66% felt that the situation would improve if the British withdrew, which is in fact what happened. As the commander of British forces acknowledged, 90% of the violence in Basra was directed against occupying forces, and thus the British withdrawal meant the level of violence would drop. U.S. Gen. David Petraeus also testified before the U.S. Senate to the fact that the level of violence in Basra plummeted as a result of the British withdrawal.

The same month, the Washington Post reported under the headline “All Iraqi Groups Blame U.S. Invasion for Discord, Study Shows“:

Iraqis of all sectarian and ethnic groups believe that the U.S. military invasion is the primary root of the violent differences among them, and see the departure of “occupying forces” as the key to national reconciliation, according to focus groups conducted for the U.S. military last month.

And yet by citing only certain senior members of the Iraqi military to the exclusion of the vast majority of the general public, the New York Times would have Americans believe that “Iraqis Hope U.S. Special Operations Commandos Stay”. Naturally, the U.S. mainstream media also stays true to the narrative that the U.S. is in the country to help Iraqis build “democracy”, the rejection of the views and positions of the overwhelming majority of Iraqis notwithstanding.