New York Times Calls for Austerity in the U.S.!

In his latest column in the New York Times Nicholas D. Kristof writes that if you want to see what would happen if the U.S. government cut spending, just look at the “austerity” in Europe and what a disaster it has been. He writes: Since Keynes, it’s been understood that, in a downturn, governments should go […]

In his latest column in the New York Times Nicholas D. Kristof writes that if you want to see what would happen if the U.S. government cut spending, just look at the “austerity” in Europe and what a disaster it has been. He writes:

Since Keynes, it’s been understood that, in a downturn, governments should go into deficit to stimulate demand; that’s how we got out of the Great Depression. And recent European data and I.M.F. analyses underscore that austerity in the middle of a downturn not only doesn’t help but leads to even higher ratios of debt to economic output.

First of all, no, deficit spending is not how the U.S. got out of the Great Depression. It was part of what made the depression “Great”. Here’s President Roosevelt’s Treasury Secretary, Henry Morgenthau, in April 1939, after the unemployment rate broke 20%:

We have tried spending money. We are spending more than we have ever spent before and it does not work…. I say after eight years of this Administration we have just as much unemployment as when we started…. And an enormous debt to boot!

One could also look at the near $800 billion Obama “stimulus” plan, and how it promised 7% unemployment compared to the near 9% unemployment that would occur without it, and how then, after it was passed, unemployment reached 10% (and how Keynesians insist this was a success).

Back to Kristof, the first link is to a Times editorial, “The Austerity Trap”. Pointing to the “austerity” of European countries and blaming spending cuts for the continued economic woes there is a constant theme in the Times (and not just with Paul “Conscience of a Liberal” Krugman, but with its other columnists, as well as the editors, as you can see). That editorial states:

The lesson that should be learned from Greece is that its fiscal mess has been made far worse by severe budget cuts…. If Republican policies to slash government programs while excessively cutting taxes were carried out here, the United States would experience a similar effect…. Taken together, the Greek experience and the recent European research, show that for the United States, a “grand bargain” on the deficit should include two main parts: spending in the near term to boost the recovery, coupled with tax increases, and spending cuts to reduce the deficit as the economy regains its health.

So, spending cuts coupled with tax cuts are bad for the economy during a recession—or so the Times tells us, citing Greece for proof. The editorial links to another article (the same article as Kristof’s second link, above), which informs us that Greece has stuck to “a program of lower spending and higher taxes.” My, how interesting. Why does the Times conclude that Greece’s “fiscal mess has been made far worse by severe budget cuts” rather than by the higher taxes? Here’s a bit more on how following the New York Times’ advice of higher taxes has worked out for Greece, from The Economist:

Since Greece’s first bail-out in May 2010, the government has imposed austerity, increasing taxes so much that people can barely manage. The unemployment rate is 19% and rising. GDP has contracted by 12.5% since 2008 and is expected to fall by another 3% this year. Even middle-class Greeks are being driven into poverty. Property prices and rents have plunged. But property taxes have tripled. The biggest blows have fallen on small family businesses (with 50 employees or fewer), which make up 99% of enterprises and employ three-quarters of the private-sector workforce. Many have closed or sacked most of their staff. Big businesses (such as banks or private hospitals) are suffering, too. Indeed, the entire private sector is haemorrhaging workers. Of the 470,000 who have lost their jobs since 2008, not one came from the public sector. The civil service has had a 13.5% pay cut and some reductions in benefits, but no net job losses. Already low, public-sector productivity has fallen further. This has led to deep resentment of the civil service, which has mushroomed in the past three decades and now employs almost a fifth of the workforce.

Apart from the detrimental effect of the tax hikes, notice how the public sector is crowding out the private sector. Now, let’s look at Greece’s “severe budget cuts”. Veronique De Rugy bothered to actually graph the data to show what “austerity” looks like in Europe. Here’s government spending in nominal terms, including Greece: 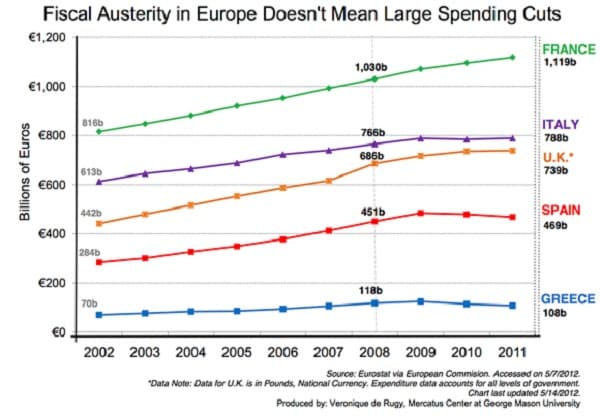 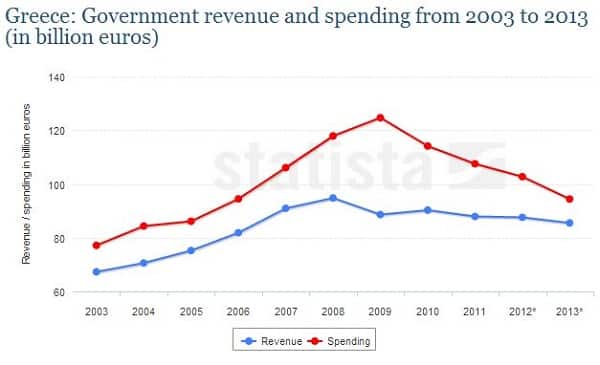 Notice that although Greece increased taxes, its revenues have actually decreased. As for those “severe budget cuts”, they do look more severe in this graph, owing to its smaller scale in the y-axis. But here is a third graph showing what Greece’s spending looks like adjusted for inflation: 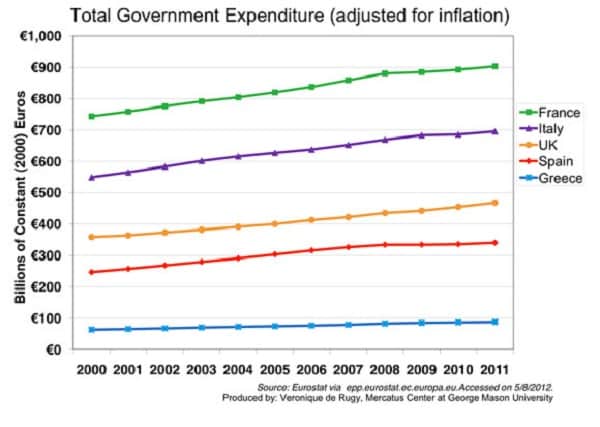 If there is austerity in Europe, in most cases it hasn’t taken the form of massive spending cuts.  Following years of large spending expansion, Spain, the United Kingdom, France, and Greece—countries widely cited for adopting austerity measures—haven’t significantly reduced spending since “austerity” supposedly started in 2008. First, France and the U.K. have not cut spending. Second, when spending was actually reduced—between 2009-2011 in Greece, Italy, and Spain—the cuts were relatively small compared to the size of their bloated European budgets. While Italy reduced spending between 2009-2010, it also increased spending in the following year by an amount larger than the previous reduction. Most importantly, meaningful structural reforms were seldom implemented. Whenever cuts took place, they were always overwhelmed with large counterproductive tax increases.  This so-called balanced approach—some spending cuts for large tax increases—has been proven to be a recipe for disaster by economists. It fails to stabilize the debt, and it is more likely to cause economic contractions.

As Juan Carlos Hidalgo points out,

Spending has declined to approximately its 2007 level in nominal terms, while in real terms it actually continues to go up.

Hidalgo also points out that government spending in Greece remained at 50.3% of GDP in 2011, “approximately its 2008 level”, and asks:

Is half of the economy not enough when it comes to government spending?

Now, here is U.S. government spending as a percentage of GDP: 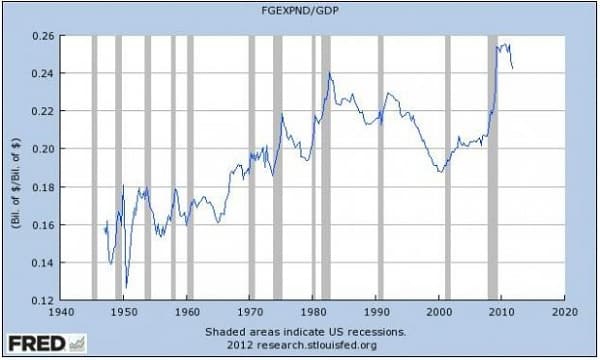 That’s about half of what Greece’s government is spending as a share of GDP. The Keynesian editors and columnists at the New York Times don’t think that’s enough. They think the U.S. government should increase spending even more and raise taxes even more.

In other words, the New York Times essentially wants the U.S. to impose the same kinds of policies it refers to as “austerity” in Greece.