When Krugman writes, "I am not making this up", he's just trying to use a Jedi mind trick on you. Don't be a weak-minded fool!

There’s a lot of talk about who is going to replace Ben Bernanke as Chairman of the Federal Reserve. I personally couldn’t care less who chairs the Fed, because the primary functions of the Fed will remain the same regardless (as I tried to point out to my interlocutor in this fascinating Twitter discussion). Which brings me to Paul Krugman’s recent column in which he writes,

Last week, The New York Sun published an editorial attacking Ms. Yellen titled “The Female Dollar.” The editorial took it for granted that the Fed has been following disastrously inflationary monetary policies for years, even though actual inflation is at a 50-year low. And it warned that things would get even worse if the dollar were to become merely “gender-backed.” I am not making this up.

It’s pretty funny how he adds “I am not making this up.” See, he needs to convince you that he isn’t making it up because he is totally making it up. Click the link and read the editorial for yourself. Here is what the editorial actually said, in the relevant excerpt:

Are we entering the era of the gender-backed dollar? We don’t discount the issue of discrimination against women in America or the importance of cracking the glass ceilings. Your editor has spent a career cheering on high octane women. But what good is a gender-backed dollar going to do in an era of fiat money? The debate about the next Fed chairman has been conducted absent any attention to the question of whether America, or the world, is being well-served by a system in which the nation’s money is convertible into nothing other than other pieces of fiat money.

We know how we are going to measure Mr. Bernanke’s performance — by the value of the dollar entrusted to his care by the Congress. He may reclaim things between now and the end of his tenure in office, but as things now stand his tenure has been a disaster. The value of the dollar, at but a 1,333rd of an ounce of gold, is substantially less than half of the 568th of an ounce of gold it was valued at on the day Mr. Bernanke acceded to the chairmanship of the Fed. Would this record have been any better were he a woman? Where does that leave Governor Yellen?

So, let’s look a bit closer here. Krugman charged that the New York Sun editorial “took for granted that the Fed has been following disastrously inflationary monetary policies for years”. What is Krugman referring to? The word “inflation” doesn’t actually appear in the editorial. He’s referring to the part where it says that the value of the dollar has fallen, as evidenced by the rising price of gold.

That is, the New York Sun recognizes that it isn’t so much that the price of gold has risen as it is that the value of the dollar has fallen due to the Fed’s unprecedented money printing. Gold, after all, fits the definition of money. Unlike Federal Reserve Notes, a.k.a. “dollars”, gold is a good store of value over time. After all, there is a finite supply of gold. The Fed can’t just print gold out of a press, as it can with the currency used in the U.S., the supply of which it has been granted a monopoly over by the federal government.

We are supposed to ignore what the price of gold is telling us about the real value of the dollar and instead just trust the government’s own measurements of inflation. We are supposed to believe that “inflation is at a 50-year low” despite the Fed quadrupling the monetary base, thusly: 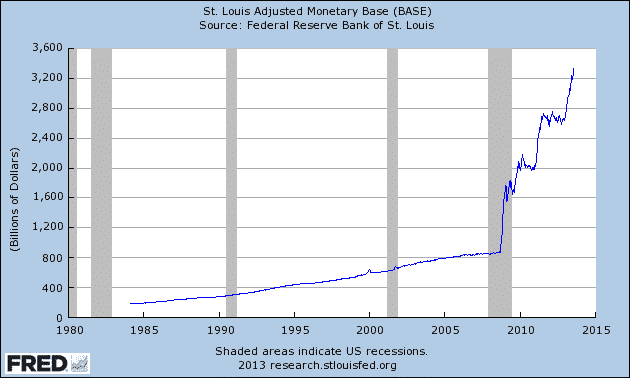 Never mind that Krugman also argues that monetary inflation is a good thing precisely because it devalues the dollar. Apparently, expanding the monetary base more in the past five years than occurred in all the years prior since  the Federal Reserve was created is not enough to do the trick. If Krugman had his way, the Fed would inflate much, much more, such that the value of the dollar really fell and price inflation was significantly higher than it is now.

But here’s where Krugman simply makes shit up to bolster his case: he adds that the Sun editorial “warned that things would get even worse if the dollar were to become merely ‘gender-backed.'” Ooh, those sexist editors! Except that they didn’t say that. They didn’t warn that if there was a Fed Chairwoman instead of a Fed Chairman that things would be worse. Rather, they simply opined that it doesn’t matter whether a man or a woman heads the Fed, since it’s primary functions will remain the same. The editorial’s obvious point is not that a woman couldn’t do the job as well as a man, but rather that the Fed’s primary purpose will be to print “money” out of thin air, regardless.

When Krugman writes, “I am not making this up”, he’s just trying to use a Jedi mind trick on you. Don’t be a weak-minded fool! Read it and reread it for yourself and see that Krugman is, in fact, very much making it up. Why would he do that? He does it in order to obfuscate the central message that the Sun editorial is communicating. He is deliberately trying to muddy the waters about the true role of the Fed in our economy.

To borrow from Bruce Lee, it is like a finger pointing at the moon, and he is crying out to you to focus on the finger and so to miss all the heavenly glory.

This kind of intellectual dishonesty is S.O.P. for Krugman. It’s only by such means as this that he can sustain his positions and his Keynesian economic ideology.