The crudeness of the rockets ostensibly strengthens the argument made by Syria and its allies that insurgents are responsible for any CW attacks. 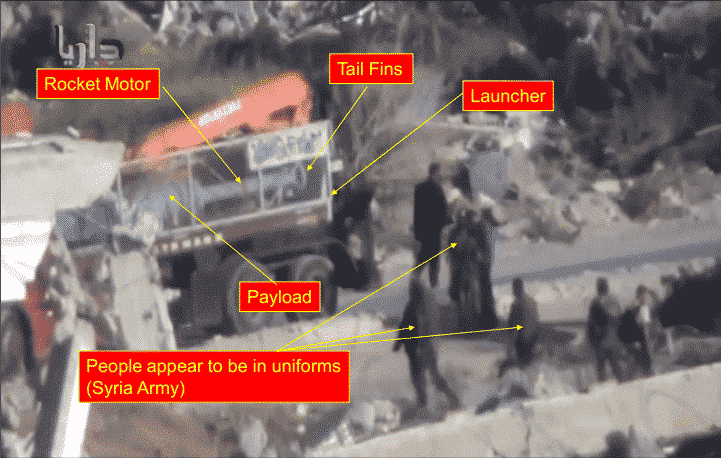 An image from a paper by Richard M. Lloyd for Tesla Laboratories, a Department of Defense contractor.

A new study of images apparently from the Syrian attack last month concludes that the rockets delivering toxic sarin gas to neighborhoods around Damascus held up to 50 times more nerve agent than previously estimated, a conclusion that could solve the mystery of why there were so many more victims than in previous chemical attacks.

The study, by leading weapons experts, also strongly suggests that the mass of toxic material could have come only from a large stockpile. American, British and French officials have charged that only the Syrian government and not the rebels was in position to make such large quantities of deadly toxins.

There are actually two studies, done separately, not one joint study. One is by Richard M. Lloyd and and the other by Theodore A. Postol.

Postol is a former employee of the Department of Defense, but is also is known for having exposed the government’s lies about the effectiveness of the Patriot missile defense system during the first U.S. war on Iraq (the “Gulf War”). So he has that going for him. His paper begins by examining reasons why either party, the Syrian government or the rebel forces, would want to use chemical weapons, and proceeds into a detailed technical analysis without drawing conclusion about which party was responsible.

The Times doesn’t mention that Mr. Lloyd formerly worked for Raytheon missiles, which manufactures the Tomahawk cruise missiles that would likely be used in U.S. attacks on Syria, and currently works for Tesla Laboratories, a contractor for Department of Defense. Shouldn’t the Times disclose this information?

It is interesting to contrast Lloyd’s analysis with a report from Jane’s Defence Weekly last week, which noted that

There has been speculation that Syria’s military used an unusual and crudely manufactured rocket in the apparent chemical weapons (CWs) attack carried out in the Damascus area on 21 August.

But we learn that that are “broadly similar in layout to what the US military calls improvised rocket-assisted mortars (IRAMs)” and that insurgents in Iraq made and used such weapons. Now, we also know that the Jabhat al-Nusra, the al-Qaeda affiliated group in Syria, is a spinoff of al-Qaeda in Iraq. With that in mind, Jane’s notes further:

While the crudeness of the rockets ostensibly strengthens the argument made by Syria and its allies that insurgents are responsible for any CW attacks, the individual numbers sprayed on their rocket motors suggest they are being mass produced on a scale that has not previously been seen in opposition-controlled areas.

In his paper, Lloyd suggests that individuals shown near the rocket launcher are Syrian army because they “appear to be in uniform”. First of all, note the “appear to be”. Secondly, even if they are wearing uniforms, consider this observation from an Israeli Defense Force (IDF) officer stationed in the occupied Syrian Golan Heights, in the Times of Israel:

He noted that often it is hard to tell the government and rebel forces apart. “It’s all mixed up here. Sometimes the [Syrian] army wears jeans and the rebels wear uniforms,” he said.

There goes pretty much the whole basis for the conclusion that it was the regime who carried out the attack.