One wonders if Roger Cohen will figure out that most of the world doesn't view a willingness to participate in war crimes as a particularly strong sign of "leadership", or if he will maintain his arrogant and myopic paradigm of American exceptionalism. 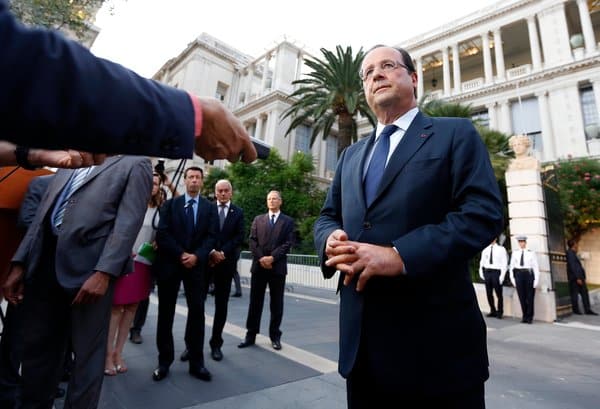 I commented the other day about New York Times columnist Roger Cohen’s view that Germany could prove itself a world “leader” by backing the U.S. in waging yet another war of aggression, on Syria this time. France’s President François Hollande’s experience doesn’t provide much support for Cohen’s hypothesis.

Just a couple days after Cohen wrote that op-ed, the Times ran an article titled “After Bold Step on Syria, French Leader Finds Himself Dismissed as Lackey“. It’s quite humorous, though presumably not intentionally:

As portrayed in a satirical television show here this week, President François Hollande is left behind to hold President Obama’s coat while the American leader and President Vladimir V. Putin of Russia hold private talks. Mr. Hollande gullibly concludes he is playing a key role.

Later in the show, “Les Guignols de L’Info,” a rough French equivalent of Jon Stewart’s “The Daily Show,” Mr. Hollande is seen interrupting a visit to a school to ask Mr. Obama’s permission to use the bathroom.

If Mr. Hollande ever thought that his decision to stand steadfast alongside the United States in backing a retaliatory strike against Syria would give him new stature on the global stage or help him at home, the last week has been a sharp shock.

Public opinion is running strongly against him; a poll published this weekend in the conservative daily newspaper Le Figaro showed about two-thirds of the French opposed to military action against Syria. There are growing demands that he grant Parliament a vote on the matter, and considerable speculation that he could lose if he did.

The article adds that “the French president is learning, like British leaders before him, that close alignment with Washington carries as much risk of looking weak as opportunity to look strong.”

One wonders if Roger Cohen will figure out that most of the world doesn’t view a willingness to participate in war crimes as a particularly strong sign of “leadership”, or if he will maintain his arrogant and myopic paradigm of American exceptionalism.

The New York Times persists in propagating the unevidenced conspiracy theory that the Russian government hacked into US election infrastructure in 2016.

The Occupation of the American Mind: Full Length Documentary Film

Occupation of the American Mind documents how the US major media present Americans with the Zionist propaganda version of the Israel-Palestine conflict.