Krugman advocated the very same Fed policy that caused the bubble and hence the inevitable bust. But his faith in printing money remains unchanged. Yet, somehow he retains his reputation. 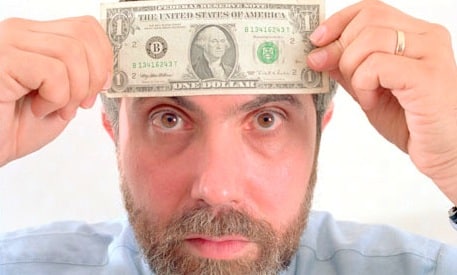 Republicans have been completely wrong about the U.S. economy three times in the past two decades — about Clinton, Bush, and Obama — but haven’t changed their doctrine a bit.

Here’s his strike one:

In round 1, Republicans predicted disaster from Clinton’s move to raise taxes on the 1 percent. What followed was a remarkable boom. Their faith in the crucial importance of not taxing rich people remained unchanged.

But think about that for a moment. What is Krugman’s point here, if not to implicitly argue that raising taxes helped the economy? The fact remains that taxes expropriate wealth from the productive private sector for the wasteful public sector, and government bureaucrats making at best arbitrary decisions about how to direct capital do not know better than the market with its pricing system how to efficiently direct scarce resources to productive ends.

What causal connection is he trying to draw between a tax hike on the rich and the NASDAQ bubble? That is, after all, the “remarkable boom” he is referring to. And doesn’t the fact that that “remarkable boom” was unsustainable and led inevitably to remarkable bust factor anywhere into his thinking?

In round 2, Republicans predicted a huge boom from Bush’s tax cuts for the 1 percent. What followed was a weak recovery, followed by a huge financial crisis. Their faith in the crucial importance of not taxing rich people — and not regulating the financial industry — remained unchanged.

We could go back to his “round 1” and, applying this same selective bias just as validly, only to make the opposite case; to wit: What followed the Clinton tax hike was a severe recession.

Or reverse his “round 2” to fit his criteria from the first; to wit: What followed the Bush tax cut was a remarkable boom.

So what do we have so far? Complete and utter nonsense!

But wait, there’s more! What did Krugman say about the Bush tax cuts at the end of 2002?

Here’s the story so far: In 2000 the bubble finally burst. As investors and businesses rediscovered the law of gravity, business investment plunged, and the economy slumped. Then the situation stabilized, more or less. Repeated interest rate cuts encouraged families to buy new houses and refinance their mortgages, putting cash in their pockets; yes, the tax cut also made a marginal contribution.

And what was that there about interest rate cuts encouraging people to buy homes and refinance? Oh, yeah, that’s right. Krugman advocated that the Fed lower interest rates “to create a housing bubble to replace the technology bubble”.

So now lets come to his third strike against the Republicans:

In round 3, Republicans predicted poor economic performance under Obama. And to be fair, the economy has not done particularly well. The crucial point, however, is the nature of the poor performance. Republicans confidently predicted Weimar 2.0 — soaring interest rates and inflation. They lambasted not just Obama but Bernanke — in fact, their attacks on Fed policy had more passion than their attacks on the stimulus, which after all didn’t last long. What actually happened, of course, was low inflation and low interest rates. Their faith in the crucial importance of not taxing rich people, not spending to help the less fortunate, and not printing money under any circumstances, remained unchanged.

Ooh! The “Republicans” (all of them?) attacked Fed policy! But how so? Did they criticize the Fed for creating the housing bubble that precipitated the financial crisis. No.

Of course, again, Krugman advocated the very same Fed policy that caused the bubble and hence the inevitable bust. But his faith in printing money remains unchanged. Yet, somehow he retains his reputation.

Krugman’s intellectual dishonesty is matched only by his hypocrisy.

For his record on the housing bubble, see my book Ron Paul vs. Paul Krugman: Austrian vs. Keynesian economics in the financial crisis.