What Are ‘Artificially Low’ Interest Rates? Paul Krugman Is Stumped!

Krugman admits asset prices are high due to low interest rates, but dismisses the risk of bubbles and puzzles over what "artificially low" rates means.

Paul Krugman notes on his blog that “the price of just about every asset category is now high by historical standards”, that “all across the board, assets are up.”

He notes that “The proximate cause is obvious: policy interest rates are very low, and expected to remain low, so money is pouring into alternative assets, driving their yields down too.”

But then he writes,

Quite a few people — including a lot of people on Wall Street, at the BIS, and so on — look at this and say that it’s terrible: the Fed is keeping interest rates “artificially low” and thereby distorting asset prices across the board, and it will all end in grief.

But although I hear the phrase “artificially low” all the time, I don’t think many people who use it have thought through what they mean. What would a non-artificial interest rate be?

“What would a non-artificial interest rate be?”

A rate determined by a free market, of course, rather than one manipulated by a government-legislated monopoly over the supply of currency and credit through the purchase of government debt and printing of money out of thin air.

Now give us a tough one.

He continues perplexed for a bit more before puzzling once more over the question,

So what are the people complaining about artificially low rates talking about? 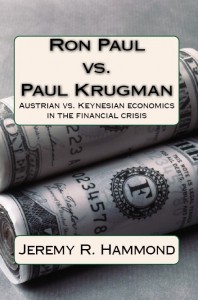 Ironically, he dismisses the notion that we are seeing asset bubbles as being grounded in circular logic! As though his own reasoning didn’t suffer from that very fallacy.

The answer to Krugman’s question is this: when people talk about “artificially low rates”, as I referred to in the comment I left, they mean rates determined through the Federal Reserve’s manipulation of the money supply that are lower than they otherwise would be if determined by the market.

It is that simple. Of course, as I document in my book Ron Paul vs. Paul Krugman: Austrian vs. Keynesian Economics in the Financial Crisis, Krugman’s criticism of Fed policy throughout the housing bubble was that its rates weren’t low enough, and he has acknowledged that the bubble was a consequence of the Fed’s low rates.

So where does that leave Krugman’s own analysis? What does it mean when it comes to the question of whether we should take Krugman’s advise about monetary policy and interest rates seriously?