Sympathy for the Devil: The NYT on Israeli Access to Water

Isabel Kershner in the New York Times sympathizes with Israelis suffering water shortages without once mentioning how Israel denies water to Palestinians.

Isabel Kershner in the New York Times hails that Israel’s efforts to desalinate Mediterranean seawater have helped it to overcome water shortages. She goes on about how the poor Israelis are heavily taxed for consuming water for their swimming pools or their nice green lawns. They have had to take only two-minute showers to conserve water. Gardeners fear for their livelihood. But Israel is “the world leader in recycling and reusing wastewater for agricultural use”, and while Israelis had to suffer through a severe drought that peaked in 2008-2009, they are solving water shortages with their ingenuity. 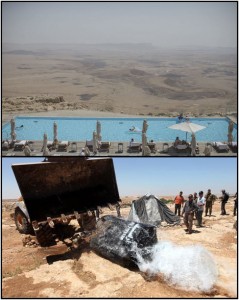 Mid-article, there is this sentence (emphasis added):

The country’s main natural water sources—the Sea of Galilee in the north and the mountain and coastal aquifers—were severely depleted, threatening a potentially irreversible deterioration of the water quality.

Kershner doesn’t bother to mention that the mountain aquifer is recharged by rainfall in and lies predominantly under the occupied West Bank, or that the coastal aquifer is shared with the Gaza Strip.

As Amira Hass points out in the Israeli daily Haaretz, Israel denies Palestinians access to their own water resources in the West Bank so that they are then forced to buy the water taken from the mountain aquifer from Israel.

Palestinian residents must deal with water shutoffs for days and sometimes even weeks at a time, a situation that is especially trying in summer. Israelis, by contrast, have the benefit of unlimited running water year round and at any time of day. Moreover, approximately 113,000 West Bank Palestinians live in about 70 villages that are not even hooked up to the central water grid. In winter and autumn, they collect rainwater in cisterns close to their homes and use it water for all purposes.

Concerning Palestinian reliance on cisterns, The Guardian describes the situation in the West Bank village of Al-Amniyr near Hebron:

The Palestinian village of al-Amniyr looks from afar like a rubbish tip until you realize that the rubbish is people’s dwellings, which have been destroyed in attacks targeting their water cisterns. The villager Mohammed Ahmad Jabor’s water cistern has been destroyed three times this year. The last time was by the settlers. The settler attacks come generally at night and where they cannot destroy water cisterns they poison them by putting chicken carcasses in them. The second time Jabor’s cistern was destroyed was by Israeli soldiers who destroyed seven tent dwellings and a sheep pen…. The land has been declared as agricultural, a designation which prohibits residents from constructing structures of any kind, especially cisterns. Construction needs permits, which are all but impossible to obtain…. And under another law, if the land is not used for three years, it reverts to Israel. So the inhabitants … are faced with a catch-22. If they comply with the law they cannot build cisterns and collect even rainwater. But if they fail to use their land agriculturally, they lose it anyway.

The Guardian explains further that “The Oslo accords created a Joint Water Management Committee, which grants Israel a veto over water resources and infrastructure in the West Bank.” In the past two years, Israel had destroyed “100 water, sanitation and hygiene structures, 44 cisterns, 20 toilets and sinks, [and] 28 wells. This year alone [2011], 20 cisterns have been destroyed. Most of this is happening in Area C, which is under full Israeli military control.”

“Unfortunately,” responded a source from the Israeli embassy in London, “there is a limited supply of water in the region. This is the fairest system for allocation through a bilateral committee.”

Israel uses more than 80% of the water from the Mountain Aquifer – the main source of underground water in Israel and the OPT – allowing Palestinians’ access to a mere 20%. At the same time, Israel prevents Palestinians from developing an effective water infrastructure.

As a result, Palestinian daily water consumption barely reaches 70 litres a day per person (well below the World Health Organisation’s recommended minimum of 100 litres). Israel consumes four times as much, with 300 litres per day, per capita.

“Israel allows the Palestinians access to only a fraction of the shared water resources, which lie mostly in the occupied West Bank, while the unlawful Israeli settlements there receive virtually unlimited supplies.” said Donatella Rovera, Amnesty International’s researcher on Israel and the OPT.

In Gaza the situation is even more critical. More than 90% of the water from the coastal aquifer is now polluted. Given the ongoing blockade Israel prevents the entry of materials that are critical for repairing the water and sewage treatment facilities which Israel damaged or destroyed in the first place during Operation Cast Lead.

As noted in a report from Amnesty International from 2009 — during the peak of the drought Isabel Kershner sympathizes so much with the Israelis for having to suffer through — the problem of lack of access to water for Palestinians “arises principally because of Israeli water policies and practices which discriminate against the Palestinian population”. The “inequality in access to water between Israelis and Palestinians is striking.” While the WHO recommended daily water consumption of 100 liters per capita, Palestinian consumption was about 70 liters a day per person, with some surviving on as little as 20 liters a day, “the minimum amount recommended by the WHO for emergency situations response.” Amnesty further stated,

Access to water resources by Palestinians in the OPT is controlled by Israel and the amount of water available to Palestinians is restricted to a level which does not meet their needs and does not constitute a fair and equitable share of the shared water resources. Israel uses more than 80 percent of the water from the Mountain Aquifer, the only source of underground water in the OPT, as well as all of the surface water available from the Jordan River of which Palestinians are denied any share.

But Isbael Kershner in the New York Times speaks not a word of any of this in her obsequious article lamenting Israel’s limited access to clean water and hailing Israeli ingenuity in solving this problem for themselves.