Product prices and availability are accurate as of the date/time indicated and are subject to change. Any price and availability information displayed on [relevant Amazon Site(s), as applicable] at the time of purchase will apply to the purchase of this product.

Why do modern economies go through the “business cycle” of booms and busts? What caused the U.S. housing bubble that precipitated the financial crisis? Who correctly predicted it and who should we listen to for wisdom moving forward?

Ron Paul vs. Paul Krugman is an examination of the root cause of the crisis as seen through the eyes of two prominent commentators on the subject, each representing a different school of economic thought. Congressman and presidential candidate Ron Paul is today perhaps the most visible proponent of the Austrian school, whose luminaries include Ludwig von Mises and Nobel Prize-winning economist Friedrich A. Hayek. Nobel Prize-winning economist and New York Times columnist Paul Krugman is today perhaps the most well-known voice for the Keynesian school, whose adherents espouse the theories of British economist John Maynard Keynes.

A comparative analysis of these two schools of economic thought as applied to the financial crisis and as promulgated through the views of Ron Paul and Paul Krugman is instructive. Whose school offered more explanatory and predictive power? Whose diagnosis and prescriptions have been better suited to deal with the problem? Who should we listen to now? 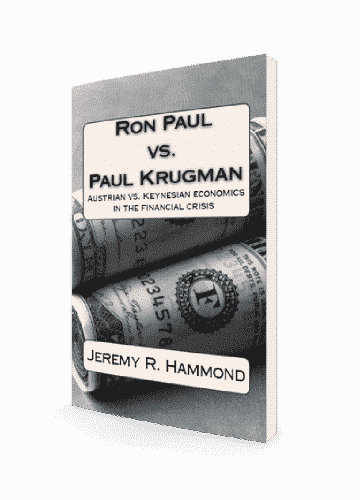 Be the first to review “Ron Paul vs. Paul Krugman: Austrian vs. Keynesian economics in the financial crisis (Kindle Edition)” Cancel reply