Mahmoud Ahmadinejad and Ban Ki-moonThe United Nations Security Council yesterday passed a fourth sanctions resolution against Iran for its insistence on enriching its own uranium... 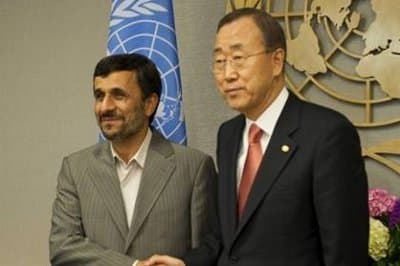 The United Nations Security Council yesterday passed a fourth sanctions resolution against Iran for its insistence on enriching its own uranium under its nuclear program and for what the resolution described as insufficient cooperation with the International Atomic Energy Agency (IAEA).

Experts criticized the U.S. policy of continually seeking tougher sanctions on Iran by pointing out how ineffective it is.

Former Assistant Secretary of the Treasury and current director of the Peterson Institute for International Economics said the chance that the new resolution would get Iran to acquiesce to U.S. demands is “virtually zero.”

Apparently validating that assessment, Iran responded immediately by shrugging off the resolution. “Nothing will change,” said the Iranian ambassador to the IAEA, Ali Asghar Soltanieh. “The Islamic Republic of Iran will continue uranium enrichment activities.”

President Mahmoud Ahmadinejad replied, “The resolutions you issue are like a used handkerchief which should be thrown in the dustbin. They are not capable of hurting Iranians.”

The international community first learned in 2003 that Iran had for 18 years been concealing its nuclear program from the IAEA, in violation of its obligations as a signatory of the Nuclear Non-Proliferation Treaty (NPT).

But since that time, Iran has allowed IAEA inspectors into the country to monitor its program. Iran insists that its program is peaceful, but the U.S. and its allies charge that Iran intends to develop nuclear weapons.

He said such cooperation included Iranian acquiescence to the Security Council’s demand that it halt uranium enrichment and implementation of the Additional Protocol, which is a further agreement NPT members may voluntarily sign that allows the IAEA even greater access to their nuclear programs.

In Iran’s case, however, adoption of the agreement is being treated as though it were a legally obligatory measure. Amano described Iran as being a “special case” in describing Iran’s adoption of the Additional Protocol as being “necessary” in order for IAEA for inspectors to do be able to do their job.

Iran charges that the Security Council’s sanctions resolutions are themselves illegal, and that the U.N. has no authority to demand that it cease enriching uranium.

The NPT does in fact guarantee that it is the “inalienable right of all the Parties to the Treaty to develop research, production and use of nuclear energy for peaceful purposes”, which legally means that no one, including the IAEA Board of Governors and the U.N. Security Council, can tell Iran that it can’t enrich uranium so long as it isn’t doing so in order to produce a nuclear weapon.

The former Director General of the IAEA Mohammed El-Baradei had repeatedly noted that there was no evidence that Iran actually has a parallel weapons program.

Prior to taking over the office, Amano had similarly said, “I don’t see any evidence in IAEA official documents about this”, in response to a question about whether Iran was seeking to develop nuclear weapons.

Iran has so far only produced low-enriched uranium (LEU), not the highly-enriched, weapons-grade uranium required to manufacture a nuclear bomb.

Western media reports commonly assert that Iran has begun producing “higher-enriched uranium”, or similar language, but in fact this is a reference to Iran’s enrichment of uranium to 20 percent for its research reactor in Tehran.

Uranium must be enriched to 90 percent or more in order to manufacture a weapon.

Iran has previously been enriching to only the 3.5 percent necessary to fuel civilian power plants.

Expert analysts agree that if Iran was to actually enrich uranium to weapons-grade and produce a nuclear bomb, it would first have to expel IAEA inspectors.

Moreover, it would likely take at least two years for Iran to acquire the other technical capabilities required to manufacture a bomb from the time that the decision was made to pursue that course.

Brazil and Turkey, which recently entered into an agreement with Iran to have uranium shipped to Turkey for enrichment there, voted against the resolution. Lebanon abstained from the vote.

Ban Ki-moon previously described the agreement, known as the Tehran Declaration,  as a potential positive step, but the U.S. has sought to downplay its importance.

The Brazilian representative stated that sanctions would not be effective, but “would lead to the suffering of the Iranian people and play into the hands of those on all sides who did not want a peaceful resolution of the issue.”

It also undermined Brazil’s efforts with Turkey to engage Iran diplomatically, and “would delay rather than accelerate or ensure progress”.

The Turkish delegate similarly expressed his country’s deep concern “that the adoption of sanctions would negatively affect the momentum created by the Tehran Declaration and the overall diplomatic process”.

U.S. Secretary of State Hillary Clinton said, “We disagreed with their vote. But I can understand from a diplomatic perspective why they might be able to make a convincing case for how they voted today.”

Clinton had previously acknowledged that the goal of U.S. policy towards Iran was to gain support for “crippling sanctions” to punish the country for its defiance of the U.S., suggesting that punishment, rather than actual progress towards verifying the peaceful nature of Iran’s program, is itself Washington’s endgame.

The U.S. representative, Susan Rice, denied that the sanctions were “aimed at Iran’s right to use nuclear energy for peaceful purposes” despite the fact that the U.S. has led the effort in demanding that Iran halt enrichment regardless of whether or not there was proof that Iran had a parallel weapons program.

President Barack Obama said the resolution “will put in place the toughest sanctions ever faced by the Iranian government”.

He also said it “was not inevitable”, suggesting that it was Iran that had not been willing to engage diplomatically with the U.S., and not vice versa.

“We made clear from the beginning of my administration that the United States was prepared to pursue diplomatic solutions to address the concerns over Iranian nuclear programs,” he said, adding that the U.S. had made the offer to Iran of better relations “if – and only if – it lives up to its international obligations” – the usual euphemism for demands issued from Washington.

Obama added, “And I want to be clear: These sanctions do not close the door on diplomacy.” Iran could “take a different and better path”, a reference to the U.S. demand that Iran not enrich its own uranium.

For Iran, the whole point of a dialogue would be to negotiate on that point.

Obama told Newsweek last year that he had “been very clear” that a U.S. military attack on Iran would not be taken “off the table”, a position he repeated in April of this year.

In addition, he issued a further threat against Iran in April, saying that the U.S. “will not use or threaten to use nuclear weapons against non-nuclear weapons states that are party to the Nuclear Non-Proliferation Treaty and in compliance with their nuclear nonproliferation obligations.”

Since the U.S. charges that Iran has not lived up to its obligations under the NPT, this logically means the U.S. could use or threaten to use nuclear weapons against Iran – a statement which itself constitutes a direct threat of violence.

The U.N. Charter forbids member nations from not only from using, but also from threatening to use force in international relations, a fact of international law which Washington perpetually disregards.

As political analyst and historian Gareth Porter wrote, “The Barack Obama administration’s declaration in its Nuclear Posture Review (NPR) that it is reserving the right to use nuclear weapons against Iran represents a new element in a strategy of persuading Tehran that an Israeli attack on Iranian nuclear sites is a serious possibility if Iran does not bow to the demand that it cease uranium enrichment.”

With the new resolution, the Security Council decided “that Iran shall not acquire an interest in any commercial activity in another State involving uranium mining, production or use of nuclear materials and technology”.

The resolution thus could be interpreted as effectively seeking to impair Iran’s ability to maintain a defensive capability against the continual threat of either a U.S. or Israeli attack against its nuclear installations.

The U.S. has long sought to get China and Russia, two other permanent members of the Security Council, on board for further sanctions against Iran, but a lesser known fact is that Israel has also been working behind the scenes to this end.

The New York Times reported yesterday that “a high-level Israeli delegation” travelled to Beijing in February “to explain in sobering detail the economic impact to China from an Israeli strike on Iran”.

An Israeli official said their Chinese counterparts “really sat up in their chairs when we described what a pre-emptive attack would do to the region and on oil supplies they have come to depend on.”

The Israeli Foreign Ministry issued a statement in response to the passage of the resolution saying, “The Security Council’s decision is insufficient, and it must be accompanied by additional steps against Iran outside the Security Council,” a reference to their desire to see the U.S. and its European allies adopt more severe sanctions of their own.