The Washington Post reports today that "The U.S. military is funding a massive protection racket in Afghanistan, indirectly paying tens of millions of dollars to warlords, corrupt public officials and the Taliban to ensure save passage of its supply convoys throughout the country, according to congressional investigators." 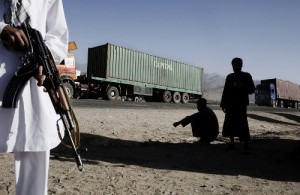 The Washington Post reports today that “The U.S. military is funding a massive protection racket in Afghanistan, indirectly paying tens of millions of dollars to warlords, corrupt public officials and the Taliban to ensure save passage of its supply convoys throughout the country, according to congressional investigators.”

This is not new, actually. Reports that the Taliban is funded by U.S. money have periodically appeared in the media for a long time. I seem to recall the first of such reports appearing in the fall of 2008. Yet the military has chosen to continue the practice unabated.

But this report comes from the Subcommittee on National Security and Foreign Affairs Committee on Oversight and Government Reform in the U.S. House of Representatives, so is likely to cause a bit more of a stir among the establishment.

The report, entitled “Warlord, Inc.: Extortion and Corruption Along the U.S. Supply Chain in Afghanistan” notes that “the Department of Defense is well aware, at the highest levels, of concerns that U.S. contractors are funding warlordism and corruption in Afghanistan.”

The Obama Administration has been equally aware of the situation. The report quotes Secretary of State Hillary Clinton in testimony to the Senate Foreign Relations Committee on December 3, 2009, as acknowledging that the U.S. is “dependent upon long supply lines”, and “one of the major sources of funding for the Taliban is the protection money” paid to keep the trucks shipping.

“The Department of Defense”, the report states, “has been largely blind to the potential strategic consequences of its supply chain contingency contracting.”

But if the DoD has been “blind”, it has been willfully so. As the report also notes, when contractors “self-reported to the military that they were being extorted by warlords for protection payments for safe passage and that these payments were ‘funding the insurgency,’ they were largely met with indifference and inaction.”

“Despite Congress’s clear intention that the Department of Defense monitor, account for, and, when necessary, discipline private security contractors,” the report adds, “the security providers working on the HNT contracts are not subjected to any meaningful oversight by the U.S. military.”

The problem with the military’s policy of sub-contracting private security companies goes beyond the resultant extortion money paid to the Taliban. The subcontractors are principally “warlords, strongmen, commanders, and militia leaders who compete with the Afghan central government for power and authority”, the report states. “Providing ‘protection’ services for the U.S. supply chain empowers these warlords with money, legitimacy, and a raison d’etre for their private armies.”

The report cites examples of leading contractors, such as Commander Ruhullah, who is “the single largest security provider for the U.S. supply chain in Afghanistan. Despite this critical and sensitive role, nobody from the Department of Defense or the U.S. intelligence community has ever met with him (except for a brief detention by U.S. Special Forces on what he says are false drug charges).”

Another leading private security provider is Matiullah Khan, nephew of Jan Mohammad Khan, the former governor of Uruzgan. “When the Dutch took responsibility for Uruzgan in 2006,” the report observes, “they demanded that President Karzai fire Jan Mohammed Khan for his notorious drug smuggling and human rights abuses.”

Another example is Abdul Razziq, who “reportedly takes in millions from extorting passing vehicles and trafficking drugs.”

While the U.S. has imprisoned people at Guantanamo Bay for allegedly having ties to Pacha Khan Zadran, “Pacha Khan himself was never imprisoned there and was pardoned by President Karzai following his return to Afghanistan in 2004.” He is now a paid subcontractor for the U.S. military.

Basically, the warlords the U.S. hires to “secure” their supply lines are a bunch of thugs, murderers, drug traffickers, and so on.

In addition to the report’s finding that the protection racket is a significant source of funding for the Taliban, it also found that it fuels “widespread corruption by Afghan officials and frequent government extortion along the road.”

Despite the ostensible mission of the U.S. military of bringing stability to Afghanistan, “The security environment in Afghanistan has rapidly deteriorated in the past two years and, as a result, trucking operations have become increasingly dangerous.”

The report states, “Warlordism is antithetical to the Afghan state, and ultimately to U.S. counterinsurgency strategy in Afghanistan, yet these warlords have flourished providing security for the U.S. supply chain there.”

Although President Hamid Karzai and the U.S. has ostensibly made disarming warlords and private militias “a top priority for success in Afghanistan”, the U.S. contracting policy has effectively done the opposite: “Rather than disarm, many of the warlords and milita groups evaded the program by becoming private security companies for the coalition.”

The U.S. policy doesn’t exactly endear Americans to the Afghan public, either. “While the Department of Defense may not know who operates and protects its supply chain, the Afghan people do.” When supply convoys come through opening fire on villages, “the local population understands that it is an American convoy.”

“In other words, in the eyes of the Afghan population, the United States of America is responsible for the actions of Commander Ruhullah, Matiullah, Colonel Razziq, Koka, and others.”

Surely, that judgment of Afghans is a correct one, unless we reject the elementary truism that the U.S. is responsible for the predictable consequences of its actions.

On that note, despite acknowledging that this problem is well known both within the Obama camp and in the military, it  characterizes the consequence as being unintended. Again, if you know your actions produce a certain consequence, and yet you persist in those actions, how, then, can you say, when those consequences come to be, that it was “unintended”?

An elementary corollary might be that the ostensible purpose for the U.S. military occupation of Afghanistan is not its actual purpose. But arriving at such a conclusion would require thinking, so it will remain beyond the grasp of political commentators and analysts working within the standard framework.