Why Marc Lynch is Wrong on a ‘Good Deal for Gaza’

Writing in Foreign Policy, Marc Lynch opines that it's a "good deal" to accept an Israeli "easing of the blockade of Gaza" in exchange for "American support for a whitewash of the investigation" of the Israeli attack on the humanitarian aid flotilla, in which 9 Turkish peace activists were murdered. 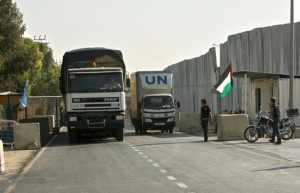 Writing in Foreign Policy, Marc Lynch opines that it’s a “good deal” to accept an Israeli “easing of the blockade of Gaza” in exchange for “American support for a whitewash of the investigation” of the Israeli attack on the humanitarian aid flotilla, in which 9 Turkish peace activists were murdered. It’s worth quoting at length:

The contours of the response to the Gaza flotilla fiasco are now coming into sharper public view: the Israeli government will significantly ease the blockade of Gaza in exchange for American support for a whitewash of the investigation of the flotilla incident. As I’ve said many times on Twitter, this is a good deal. No investigation was ever going to produce anything of any particular value, but easing the blockade of Gaza could have significant positive effects for the people of Gaza, the prospects of Palestinian reconciliation, the peace process, and American credibility in the region. None of those will happen on their own, of course. And nobody is likely to be fully satisfied with the new measures. I’ve been quite critical of how the Obama team has handled the Israeli-Palestinian track, and particularly the Gaza situation — and if they had moved strongly to resolve the Gaza blockade a year ago, the issue wouldn’t have been there now to exploit. But now, I think they deserve some real credit for nudging Israel towards finally making a move which could over time open up some real new possibilities for progress.

I know a lot of people won’t agree with me on this, but trading off the investigation for the blockade was the right move. It is difficult to imagine what value even a real, independent international investigation of the flotilla incident would possibly have. The incident itself was only a minor one in the longer, deeper story of the Gaza blockade — a fiasco waiting to happen, not a bolt from the blue. An investigation narrowly focused on the flotilla and what happened during the Israeli boarding would be of only marginal value, while the process itself would be hopelessly politicized. The Israeli self-study seems designed to be self-discredting [sic]….

Gaza itself has always been the point for most people, not the flotilla itself. Israel’s blockade of Gaza has long been widely recognized as a failure, harming the people of Gaza while strengthening Hamas and serving as a focal point for international anger. Hawks will complain that this is the wrong time to ease the blockade because it will allow Hamas to claim a victory, but that’s a weak argument — Israel, and the United States, have had many long months to ease the blockade on their own terms and have refused….

Obama could have taken office and forced the issue of the Gaza blockade as a way of demonstrating real change from the Bush administration, and in the aftermath of the Israeli war against Gaza this would likely have commanded widespread international support. But for whatever reason, the Obama administration chose to continue the Bush administration’s policy of focusing on the Ramallah-based Palestinian Authority and excluding Hamas….

That’s the past. The Obama administration now deserves credit for focusing on Gaza and helping to convince the Netanyahu government to make substantial changes to the Gaza blockade. The emerging system seems likely to shift from a system which kept out a vast and bewildering array of goods and products to one with a much more tightly defined black list of items with military applications. A much wider range of food and materials should now be able to enter, allowing for greater rebuilding and a more normal life — ideally, while also reducing the near-complete dependence of Gazans on the Hamas-controlled tunnel smuggling trade. It’s not the full lifting of the blockade which many have demanded, but it’s still a significant change — one that sort of reminds me of the attempt to create “smart sanctions” on Iraq back in 2001, as the U.S. came to recognize that the old sanctions regime had almost totally collapsed, and only served to strengthen Saddam’s regime.

Lynch gets it right in many regards. Yes, an investigation into the flotilla attack would be of “marginal” value in the grand scale of things, given that the real issue is Israel’s ongoing blockade of Gaza — a policy of collective punishment against Palestinian civilians in violation of international law.

Yes, the Obama administration could have seriously confronted Israel and force its hand on the blockade, rather than continuing the policy of the Bush administration of what the Washington Post rightly (and in unusual forthrightness) called “unconditional U.S. support” for Israel yesterday.

Yes, an Israeli self-investigation would not be seen as credible — and rightly not.

But the problem with Lynch’s argument is his assumption that it is necessary to sacrifice a real, credible, international investigation of the murder of humanitarian aid workers in international waters in order to achieve an “easing” of the blockade — much less and end to that criminal policy.

This assumption is wholly fallacious.

The truth is that the Obama administration is fully capable of both pressuring Israel to end — not only “ease” — the blockade and of rallying the international community within the U.N., and, specifically, in the Security Council, to establish an international commission to investigate the flotilla attack.

This is really elementary, and how such perfectly simple observations escape analysts like Lynch, I cannot comprehend.

Lynch’s own observations about the policy choices the Obama administration has made up until the attack demonstrate clearly that it is the enormous international — and domestic — outcry against Israel’s murderous assault on the flotilla that have, for pure public relations purposes, left the administration with no viable alternative but to call upon Israel to ease the blockade.

They must, after all, preserve some modicum of credibility. This is not a shift in that same policy continued from the Bush administration, merely a minor detour along that same path — a little bump in the road in the form of a PR problem that must be overcome, not for the sake of the Palestinians who continue to suffer, or for compliance with elementary legal and moral principles, but purely as a matter of politics.

The Obama team deserves no “credit” for calling on Israel to change it’s blockade policy. Calling the blockade “unsustainable” is extraordinarily weak, and incontrovertibly demonstrates the disingenuous nature of the administration’s mere lip-service to such principles.

It’s little different from early on in the administration, when U.S. officials criticized Israel’s illegal settlement policy and publicly called upon the Netanyahu government to cease such activities while simultaneously announcing that decreasing — much less ending — U.S. support for Israel that effectively empower it to continue those very same criminal policies was not an option they would consider.

Policy is rightly judged by deeds, not words; by actions, not meaningless rhetoric intended only for public consumption and to no other end than placating public opinion, both domestic and international.

The Obama administration would be worthy of praise if it announced that all U.S. support for Israel, and, effectively, for Israeli policies — financial, military, and diplomatic — is ending until Israel complies with international law and numerous U.N. Security Council resolutions, including by ending its collective punishment of the people of Gaza, completely withdrawing from the West Bank, dismantling all illegal settlements in the Palestinian territory — which means all settlements, and discontinuing from further criminal aggression and murder of Palestinians such as its massacre that was Operation Cast Lead from December 27, 2008 to January 18, 2009 (for more on that, see my update for Project Censored and my other writing on that subject for which they gave me their award for outstanding investigative journalism).

But praising the Obama administration for exerting minor pressure on Israel to “ease” its blockade while accepting its continuance and helping to ensure a “whitewash” of the flotilla attack — Lynch’s own description — and describing this as a “good deal” is at best demonstrative of astonishingly myopic analysis, and at worst of outright intellectual and moral cowardice.