McChrystal’s Canning Served to Preserve, Not Shift, Policy in Afghanistan

Many analysts have postulated that President Obama's canning of Gen. Stanley McChrystal was compelled in part by a desire within the administration to shift the Afghanistan policy. 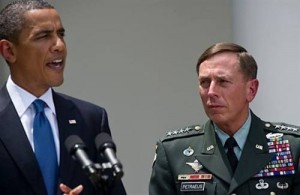 Many analysts have postulated that President Obama’s canning of Gen. Stanley McChrystal was compelled in part by a desire within the administration to shift the Afghanistan policy. The Obama administration itself has denied that this is so, but I see a general trend among commentators that this denial is not plausible, that the administration in fact desires a revised strategy.

For example, Gareth Porter wrote after the firing, despite that denial, that Obama’s decision to replace McChrystal with Gen. David Petraeus “obviously reflects a desire by Obama to find a way out of a deepening policy crisis in Afghanistan.”

While I have an enormous amount of respect and admiration for Porter and his extraordinary reporting and analysis, I disagree on this point. Arguing in favor of the policy shift thesis, Porter wrote that “It had become evident in recent weeks that McChrystal’s strategy is not working as he had promised, and Congress and the U.S. political elite had already become very uneasy about whether the war was on the wrong track.”

But recall that McChrystal was a replacement for Gen. David McKiernan, who was sacked because the Obama administration wanted to shift the war strategy away from conventional warfare in favor of counterinsurgency. The idea was that there should be less of a dependence upon airstrikes, which resulted in high numbers of civilian casualties. It meant stepping up training of Afghan security forces, and more boots on the ground working amongst local populations, “winning hearts and minds”.

The Obama administration’s plan was to have a troop “surge”, a la Iraq under Petraeus’s command, and then begin a drawdown of forces in 2011. The idea was to win military victories over the Taliban so as to be in a position of greater strength to later begin talks with members of the Taliban. It was the notion that a military solution should precede a diplomatic one, as opposed to the notion both military and diplomatic options taking a parallel course (much less that diplomacy should replace the use of violence altogether).

McChrystal did just what Obama appointed him to do. Only, it didn’t work. The military has been unable to woo local populations. As Gareth Porter has also observed, the military operation in Marja that was supposed to kick off Obama’s escalation of the war was a failure. Far from winning hearts and minds, the local population didn’t want the foreign forces there, and shunned the troops. The planned offensive in Kandahar has had to be reconsidered because of such overwhelming local opposition to any further escalation.

Obama is the Commander in Chief of the armed forces, and he hired McChrystal to implement this “counterinsurgency” strategy. McChrystal followed orders. So are we to believe Obama fired McChrystal for a failure that was ultimately Obama’s own? That’s certainly possible, but I have my doubts.

“Petraeus’s political skills and ability to sell a strategy involving a negotiated settlement offers Obama more flexibility than he has had with McChrystal in command”, assesses Porter, who points out that “his main accomplishment” with the Iraq “surge” was “to make the first formal accommodation with Sunni insurgents.”

But in Iraq, Sunni insurgent groups had already turned against other Sunni groups, such as Al Qaeda in Iraq, who were responsible for terrorism against civilians and other acts contributing to sectarian violence. Petraeus didn’t begin the “Awakening Councils” or “Sons of Iraq”, as the Sunni groups operating in coordination with U.S. forces came to be called; he merely noticed the trend and capitalized upon it by arming and otherwise bringing such groups under his fold.

An article in the Independent this week similarly attributes McChrystal’s firing to the “Runaway General’s failed strategy”, the reference being to the title of the Rolling Stone article in which McChrystal and his staff mocked their civilian leadership in Washington that prompted his recall and replacement.

But the article also suggests that a briefing McChrystal had given was as much a reason for his sacking as the Rolling Stone piece. In the briefing, McChrystal outlined a failed Afghanistan policy, suggesting that

only a fraction of the areas key to long-term success are “secure”, governed with “full authority”, or enjoying “sustainable growth”. He warned of a critical shortage of “essential” military trainers needed to build up Afghan forces — of which only a fraction is classed as “effective”.

He pinpointed an “ineffective or discredited” Afghan government and a failure by Pakistan “to curb insurgent support” as “critical risks” to success. “Waning” political support and a “divergence of coalition expectations and campaign timelines” are among the key challenges faced, according to the general….

General McChrystal’s presentation to Nato defence ministers and Isaf representatives provided an uncompromising obstacle to Mr Obama’s plan to bring troops home in time to give him a shot at a second term, according to senior military sources. The general was judged to be “off message” in his warning to ministers not to expect quick results and that they were facing a “resilient and growing insurgency”….

The reality, according to a senior military source, is that General McChrystal’s candour about the reality of the situation was an obstacle to Mr Obama’s search for an “early, face-saving exit” to help his chances in the 2012 presidential elections. “Stan argued for time, and would not compromise. Rolling Stone provided an excuse for Obama to fire the opposition to his plan without having to win an intellectual argument,” he said.

McChrystal assessed in his briefing that there was not enough progress training Afghan security forces, the Afghan government did not have authority over most of the country, most of the country was not “secure”,  the government is plagued with corruption, and development and reconstruction has not progressed as necessary.

But here’s the kicker: Newly elected Prime Minister of the U.K. David Cameron

said General McChrystal had been urging Washington to “start the political track as soon as possible” while his replacement, General Petraeus, has argued “that we need to get the upper hand militarily and regain the military initiative, and then negotiate from a position of strength”.

Seen in this light, Obama’s canning of McChrystal and choice of Petraeus as replacement represents not a desire to shift U.S. policy in Afghanistan, but a desire to keep it on it’s (failed) course.

McChrystal was not alone in suggesting that the “political track” should begin “as soon as possible”. Gen. Sir David Richards, the head of the British army, said this week, “If you look at any counter-insurgency campaign throughout history there’s always been a point at which you start to negotiate, probably through proxies in the first instance.” He said he was expressing his “private view” in adding: “I think there’s no reason why we shouldn’t be looking at that sort of thing pretty soon.”

That assessment has certainly proven accurate up until now, I haven’t seen compelling evidence that this is going to change any time soon.

Talks seem to be going forward regardless. President Hamid Karzai announced last week that the U.N. had agreed to remove Taliban commanders who renounced ties to al Qaeda from a U.N. blacklist.

The New York Times reported last week that “Pakistan is exploiting the troubled United States military effort in Afghanistan to drive home a political settlement with Afghanistan that would give Pakistan important influence there but is likely to undermine United States interests”, and that McChrystal’s dismissal “will almost certainly embolden the Pakistanis in their plan”. Furthermore:

Pakistan is presenting itself as the new viable partner for Afghanistan to President Hamid Karzai, who has soured on the Americans. Pakistani officials say they can deliver the network of Sirajuddin Haqqani, an ally of Al Qaeda who runs a major part of the insurgency in Afghanistan, into a power-sharing arrangement.

In addition, Afghan officials say, the Pakistanis are pushing various other proxies, with [Pakistan army chief] General Kayani personally offering to broker a deal with the Taliban leadership….

Despite General McChrystal’s 11 visits to General Kayani in Islamabad in the past year, the Pakistanis have not been altogether forthcoming on details of the conversations in the last two months, making the Pakistani moves even more worrisome for the United States, said an American official involved in the administration’s Afghanistan and Pakistan deliberations.

“They know this creates a bigger breach between us and Karzai,” the American official said.

And now Al Jazeera is reporting that Karzai “has met Sirajuddin Haqqani, leader of a major anti-government faction, in face-to-face talks”. Both Karzai’s office and a Pakistani army spokesman denied that any such dialogue has taken place, the denials seems more implausible than that such a talk might actually have occurred.

I suppose I could be wrong; it’s possible the Obama administration has secretly given its blessing to Afghan government talks with insurgency leaders. But I don’t see any evidence to support that, and plenty to the contrary, so I’ll stick with my own assessment.