There’s this idea out there that President Obama had, in a letter to Brazilian President Lula da Silva, praised and encouraged the Brazil-Turkey initiative to forge an agreement with Iran (the “Tehran Declaration”) to have it export uranium for enrichment abroad, to be returned as fuel rods for use in its nuclear program, only to […] 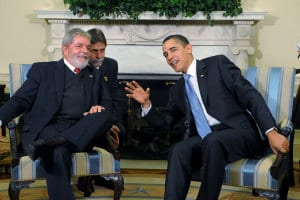 There’s this idea out there that President Obama had, in a letter to Brazilian President Lula da Silva, praised and encouraged the Brazil-Turkey initiative to forge an agreement with Iran (the “Tehran Declaration”) to have it export uranium for enrichment abroad, to be returned as fuel rods for use in its nuclear program, only to then do an about-face and criticize the deal.

This interpretation is accepted pretty much across the board. I’ve not seen any commentator or analyst question it. Noam Chomsky, for instance, writes:

Obama had praised the initiative in a letter to Brazil’s president Lula da Silva, apparently on the assumption that it would fail and provide a propaganda weapon against Iran. When it succeeded, the US was furious, and quickly undermined it by ramming through a Security Council resolution with new sanctions against Iran that were so meaningless that China cheerfully joined at once – recognizing that at most the sanctions would impede Western interests in competing with China for Iran’s resources.

Most of this is right on (as is the rest of the article, which I encourage people to read in its entirety), but even the brilliant Noam Chomsky gets it wrong sometimes (I presume he would have known better had he read the letter himself, but he’s probably relying here on the unanimous but incorrect interpretation relayed by the media).

It’s simply not correct that Obama “praised the initiative” in the letter. There was no about-face from the Obama administration. On the contrary, Obama has been quite consistent, as an examination of the actual text of the letter will demonstrate incontrovertibly.

Obama’s letter was a response to “the intent of Brazil and Turkey to work toward finding an acceptable solution.” Obama was writing “to respond in detail to” their “ideas”, which he had “carefully considered”. He wished “to offer a detailed explanation” of his “perspective” and to “suggest a way ahead.” Obama agreed that the Tehran Research Reactor (TRR) provided

an opportunity to pave the way for a broader dialogue in dealing with the more fundamental concerns of the international community regarding Iran’s overall nuclear program.

opportunity to begin to build mutual trust and confidence, and thereby create time and space for a constructive diplomatic process. That is why the United States so strongly supported the proposal put forth by former International Atomic Energy Agency (IAEA) Director General ElBaradei.

The key to correctly interpreting this letter is understanding the reference here, which is to a U.S. proposal, which — like the Brazil-Turkey arrangement — would include Iran shipping uranium abroad for enrichment. However, the U.S. proposal, relayed via the IAEA, was intended to get Iran to (a) reduce its stockpile so it wouldn’t retain enough uranium to be able to theoretically build a nuclear bomb and (b) completely cease its own enrichment activities. Iran, fearful of the U.S. reneging and unwilling to surrender its right, as recognized and guaranteed under the nuclear non-proliferation treaty (NPT), rejected that proposal.

One must understand the presumption of the Obama administration that Iran should effectively surrender its rights under the NPT to be able to correctly interpret what follows in the letter. Continuing, Obama wrote that (emphasis added throughout):

The IAEA’s proposal [read “the U.S. proposal”] was crafted to be fair and balanced, and for both sides to gain trust and confidence. For us, Iran’s agreement to transfer 1,200 kg of Iran’s low enriched uranium (LEU) out of the country would build confidence and reduce regional tensions by substantially reducing Iran’s LEU stockpile. I want to underscore that this element is of fundamental importance for the United States. For Iran, it would receive the nuclear fuel requested to ensure continued operation of the TRR to produce needed medical isotopes and, by using its own material, Iran would begin to demonstrate peaceful nuclear intent.

Iran, however, rejected the proposal, as already noted, and insists that it “retain its low-enriched uranium on its territory until delivery of nuclear fuel.” That would negate goal (a) of the U.S. proposal, above, so the U.S. rejected this counter-proposal from Iran. Continuing (emphasis added):

We understand from you, Turkey and others that Iran continues to propose that Iran would retain its LEU on its territory until there is a simultaneous exchange of its LEU for nuclear fuel…. Thus, the confidence-building strength of the IAEA’s proposal would be completely eliminated for the United States and several risks would emerge. First, Iran would be able to continue to stockpile LEU throughout this time, which would enable them to acquire an LEU stockpile equivalent to the amount needed for two or three nuclear weapons in a year’s time. Second, there would be no guarantee that Iran would ultimately agree to the final exchange. Third, IAEA “custody” of Iran’s LEU inside Iran would provide us no measurable improvement over the current situation, and the IAEA cannot prevent Iran from re-assuming control of its uranium at any time.

There is a potentially important compromise that has already been offered. Last November, the IAEA conveyed to Iran our offer to allow Iran to ship its 1,200 kg of LEU to a third country — specifically Turkey — at the outset of the process to be held “in escrow” as a guarantee during the fuel production process that Iran would get back its uranium if we failed to deliver the fuel. Iran has never pursued the “escrow” compromise and has provided no credible explanation for its rejection.

It’s worth pausing here to make a few tangential observations. Again, notice here Obama acknowledges it is “our offer” as “conveyed” by the IAEA — not the “IAEA’s proposal” as suggested previously. And, again, Iran had a perfectly good explanation for why it rejected the deal; several, actually. First, Iran had been burned previously and feared being burned again — that is to say, they felt they had no guarantee that their uranium would actually be returned to them. Additionally, as already noted, they view as non-negotiable that they must retain their right under the NPT to enrich uranium for themselves, which, to accept the U.S. “offer”, is a right they would have to tacitly surrender. These explanations are not “credible” because the “offer” was not so much an “offer” as an ultimatum. Returning to the letter:

I believe that this raises real questions about Iran’s nuclear intentions, if Iran is unwilling to accept an offer to demonstrate that its LEU is for peaceful, civilian purposes. I would urge Brazil to impress upon Iran the opportunity presented by this offer to “escrow” its uranium in Turkey while the nuclear fuel is being produced.

That last sentence is the one universally — as far as I have seen — misinterpreted by commentators and analysts. When Obama writes that Brazil should “impress upon Iran the opportunity presented by this offer“, he is not referring to the Brazil-Turkey proposal, but to the previous U.S. proposal, which Iran had already replied to with a counter-proposal (more along the lines of the Brazil-Turkey deal), which was in turn rejected by the U.S.

Again, this is a clear rejection of what became the Tehran Agreement, not acceptance and encouragement of it. Obama goes on to say that Iran’s having “undermined confidence in the way it has approached this opportunity” led him to “question whether Iran is prepared to engage Brazil in good faith”, which is “why I cautioned you during our meeting.” He stated that “Iran has to convey to the IAEA a constructive commitment to engagement through official channels — something it has failed to do.”

Notice here that “through official channels” does not include via Brazil and Turkey, and there’s no room to interpret this otherwise. Rather “official channels” euphemistically means through Washington (via the IAEA).

Meanwhile, we will pursue sanctions on the timeline that I have outlined. I have also made clear that I will leave the door open to engagement with Iran. As you know, Iran has thus far failed to accept my offer of comprehensive and unconditional dialogue.

It must also be emphasized that while the Tehran Declaration did finally include an agreement by Iran that it would ship 1,200 kg of its own uranium to Turkey for enrichment, notice that at the time of Obama’s letter, Iran had not yet agreed to do so — or, if it had, it was nevertheless still the understanding in Washington “that Iran continues to propose that Iran would retain its LEU on its territory until there is a simultaneous exchange of its LEU for nuclear fuel”. Obama is absolutely clear about rejecting that.

Additionally, as Obama pointed out, the U.S. proposal was effectively that Iran would not have control of its own uranium (that is to say, that it would be held “in escrow”), whereas under the Tehran Declaration, Iran would retain control, and, at “upon the request of Iran”, Turkey would “return swiftly and unconditionally Iran’s LEU to Iran”. Again, Obama was perfectly unambiguous in his letter that such an arrangement would be unacceptable to the U.S.

In conclusion, while, so far as I have seen, there has been a universally-accepted interpretation of Obama’s letter to Lula da Silva that says he had accepted and encouraged the Brazil-Turkey proposal, the fact of the matter is that the letter, on the contrary, was perfectly unambiguous in its rejection of that deal in favor of the previous “offer” the U.S. had made to Iran.

Unfortunately, this universal failure to properly interpret Obama’s letter to da Silva is reflective of the broader fundamental failure among commentators and analysts (Chomsky excluded; which is why I presume he hadn’t read the letter for himself) to correctly interpret U.S. policy towards Iran under the Obama administration.