The looted vault of the Iraqi National Museum (Jerome Delay/AP)

Erasing Iraq: The Human Costs of Carnage, a new book by Mike Otterman, Richard Hil, and Paul Wilson (available from the AET Book Club), sets out to deconstruct the narrative of the United States as the benign guardian of Iraqi interests by presenting an account of the tragedy of war from Iraqi perspectives. 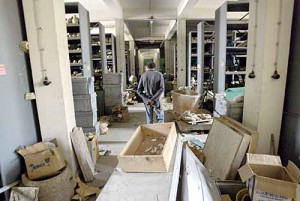 The looted vault of the Iraqi National Museum (Jerome Delay/AP)

This article was originally published in The Washington Report on Middle East Affairs, August  2010, pp. 43, 50.

Erasing Iraq: The Human Costs of Carnage, a new book by Mike Otterman, Richard Hil, and Paul Wilson (available from the AET Book Club), sets out to deconstruct the narrative of the United States as the benign guardian of Iraqi interests by presenting an account of the tragedy of war from Iraqi perspectives.

When many people think about pre-invasion Iraq, it is the brutal dictatorship of Saddam Hussain that most comes to mind: his use of poison gas during the devastating Iran-Iraq war, his invasion of Kuwait, his brutal suppression of rebellions that erupted in the immediate aftermath of the 1991 Gulf war, his torture chambers. But what about Iraq’s history, its culture, its society?

“U.S. war in Iraq did not start in 2003—it started in 1991,” Otterman explained in an interview with the Washington Report. Asked how Iraq today compares with the past, he pointed out that, prior to the first Gulf war, Iraq was a highly modernized society that “boasted the region’s best healthcare and education system. Literacy rates were high and there was a 100 percent gross enrollment rate on the primary school level. The state’s free and universal healthcare was the envy of its neighbors. Women’s rights flourished—in 1989, for example, more than 10 percent of the seats in Iraq’s national assembly were held by women.

“But the first Gulf war changed everything,” he said. “It shattered the Iraqi state—and it has never recovered.” Quoting then-U.N. Under-Secretary General Martti Ahtisaari, Otterman described Iraq as having been “relegated to a pre-industrial age.”

What’s more, he added, U.N. sanctions prevented reconstruction. Medicines and medical equipment, machinery, and construction materials were embargoed. The sanctions toll “has been estimated at more than 1.2 million lives,” he noted. “According to UNICEF, more than 500,000 Iraqis under five years old died. And this is all before the 2003 invasion.”

When then-Secretary of State Madeleine Albright was asked on CBS-TV’s “60 Minutes” about the half million dead Iraqi children, she infamously replied, “We think the price is worth it.” Would Iraqis agree? Would any human being?

“Since 2003, women’s rights, healthcare, and education have been degraded further,” Otterman continued. There have been reports of women being attacked with acid for not wearing veils, and non-Muslims now wear veils out of fear for their safety.

Citing statistics on the degradation of education in Iraq, Otterman noted that by late 2007, more than 760,000 Iraqi children were not in primary school, and only 28 percent of 17-year-olds had taken their final exams. In addition, teachers and university professors have been the target of attacks by Sunni and Shi’i fundamentalists, with roughly 300 academics having been assassinated since 2003. Thousands more have fled the country.

A similar tragedy has occurred with healthcare, with medicines still in short supply. “More than 120 doctors were killed and Iraq’s Ministry of Health has estimated at least 15,000 medical professionals have fled,” Otterman said. “During the peak of Iraq’s civil war, the ministry was controlled by Shi’i militias. For many Sunnis, even going to a hospital for medical treatment was not an option—the risk of kidnapping was simply too great. Countless Iraqis died seeking medical attention—let alone the thousands who have expired in overcrowded, unsanitary and overburdened clinics and hospitals.”

Sometimes forgotten in the fog of war is Iraq’s rich history and culture. Once known as Mesopotamia, it is widely considered to be the cradle of civilization, and is a land that has seen the rise and fall of empires. While Europe languished in the Dark Ages, Baghdad was the center of scholarship, helping preserve literature and many other priceless cultural gifts for posterity.

Yet when U.S. forces invaded Iraq in March 2003, despite warnings from analysts, they did not provide security. As a result, many ministry buildings were sacked and looted. The National Museum of Iraq, which arguably housed some of the most important collections of archaeological artifacts in the world, was looted.

This was a loss not only for Iraqis, but for humankind, Otterman pointed out, noting that “more than one million books have been destroyed since 2003. The National Archives, for example, lost at least 25 percent of its collection of important historical documents. More than 9,000 items remain missing from the Baghdad Museum. And countless archeological sites—and Iraq has more than 100,000 registered sites—have been overrun by smugglers.

“Why was the looting unchecked by U.S. forces?” he asked. There are clues. Otterman cited Wall Street Journal correspondent Yaroslav Trofimov, according to whom U.S. commanders said that “looting was a good thing…looting undermines the old regime.” Otterman pointed out that “U.S. forces stationed only blocks away from the Baghdad Museum and National Archives were not ordered to protect these sites,” even though “U.S. forces did protect the Ministry of Oil and Interior Ministry—the location of Ba’athist records charting close U.S.-Iraqi ties” during the 1980s. That was when Saddam Hussain committed his most atrocious human rights abuses, including his use of chemical weapons.

“While there are occasional reports of the odd artifact being recovered by INTERPOL, thousands of priceless items have simply disappeared forever,” Otterman lamented. “This is a central component of the claim in Erasing Iraq that sociocide has occurred in Iraq. Sociocide denotes the destruction of Iraqi culture and way of life. In addition to the millions dead and displaced, Iraqi cultural treasures—true elements of an Iraqi national identity—were destroyed. The term sociocide is apt to describe this unique and deeply permanent level of destruction.”

There has been considerable controversy over the actual number of “excess deaths” in Iraq—deaths that would not have occurred had there been no war. According to Otterman, an absolute minimum figure is 100,000. But this figure comes from Iraq Body Count (<www.iraqbodycount.org>), which counts only deaths reported in English-language media from direct acts of violence.

A study published in October 2006 by the prestigious medical journal Lancet provides the most reliable estimate to date. Their methodology, Otterman explained, “was the same the U.S. government uses to count the dead in conflict areas, including Kosovo.” The study’s findings were that approximately 655,000 excess Iraqi deaths had occurred, including both militants and civilians.

But much violence has occurred since then, Otterman noted, and by extrapolating the data through to the present, a rough estimate of one million deaths can be made.

“When you combine this figure with the more than five million displaced since 2003,” he said, “you begin to get a sense of the deep, permanent level of destruction the United States has unleashed.”

Describing the level of trauma as “truly incalculable,” Otterman asked: “How do you quantify this human toll? The answer: Simply by reading and accessing the narratives of Iraqis that have lived through this very real sociocide. In Erasing Iraq, we quote dozens of refugees in Syria, Jordan, and Sweden, plus a slew of Iraqi bloggers who lived through the carnage in real time. These narratives exist in sharp contrast to the bland, misleading, or propagandistic accounts of war featured heavily in the mainstream news outlets. Only by engaging directly with Iraqi narratives can outsiders get a true sense of the human costs of war in Iraq.

“That was the chief aim of this book,” Otterman concluded, “to provide a platform for Iraqis’ voices to be heard.”