Foreign Policy Journal — Secretary of Defense Donald Rumsfeld was at the very least informed in May 2003 by the head of the Coalition Provisional Authority (CPA) in Iraq, L. Paul Bremer III, that the Iraqi army would be disbanded, a decision that was instrumental in helping to spur the Iraqi insurgency, and one that […] 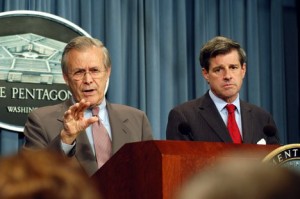 Foreign Policy Journal — Secretary of Defense Donald Rumsfeld was at the very least informed in May 2003 by the head of the Coalition Provisional Authority (CPA) in Iraq, L. Paul Bremer III, that the Iraqi army would be disbanded, a decision that was instrumental in helping to spur the Iraqi insurgency, and one that former Bush administration officials to this day have refused to take responsibility for.

Top officials, including President George W. Bush, Vice President Richard Cheney, and Secretary Rumsfeld, have disavowed authorizing the order, and the narrative was constructed that Bremer had issued CPA Order #2, disbanding the army, on his own initiative. Bremer defended the decision, but denied that he was acting rogue in issuing it, claiming in a 2007 op-ed in the New York Times that “the policy was carefully considered by top civilian and military members of the American government”, and that he had “briefed Secretary Rumsfeld on the issue several times, and forwarded a final draft of the proposed order for his approval on May 19.”[1]

Ironically, confirmation that Bremer had informed Rumsfeld that the army would be disbanded comes from a release of Department of Defense documents courtesy of the former Secretary himself, part of an effort to promote his new memoir, “Known and Unknown“, with an accompanying website, “The Rumsfeld Papers” (www.rumsfeld.com). But the documents also show that, while the policy of de-Ba’athification was considered by top officials, contrary to Bremer’s account, there was a generally accepted view that the regular army should be maintained.

Among the documents released is Bremer’s memo to Rumsfeld informing him of his intent to issue Order #2. In that memo, with the subject heading “Dissolution of the Ministry of Defense [MOD] and Related Entities” and dated May 19, 2003, Bremer stated, “In the coming days I propose to issue the attached order (Tab A) carrying forward the de-Ba’athification effort by dissolving Saddam’s key security ministries…. The order also makes clear we will begin the process of establishing new armed forces for the new Iraq to provide for legitimate self-defense needs.” Bremer also noted that “The order will affect large numbers of people: There were some 400,000 employees of the MOD alone”, and acknowledged “the risks of serious discontent, increased terrorism, and much higher crime rates that may result if we cut of [sic] all military and security sector pensioners in a heavily militarized society.” Bremer thus recommended paying “most pensions” and “severance payments to employees of dissolved entities.” Under Secretary of Defense Paul Wolfowitz, Under Secretary of Defense for Policy Douglas Feith, and Department of Defense General Counsel William Haynes II were also sent the memo, which included the proposed Order #2 stating that the army and Ministry of Defense would be dissolved.[2] Bremer has claimed he also sent the memo to Lt. Gen. David D. McKiernan and the Joint Chiefs of Staff, but no other names were included in the “CC” field.[3]

Despite this confirmation that Rumsfeld was in the know, the documentary record, including additional documents released by the former Secretary of Defense, reveals that, far from being widely discussed and approved among top administration officials, in fact there was explicit opposition to disbanding the army, suggesting that the decision to do so was highly compartmentalized within the Pentagon.

In his op-ed, Bremer quoted the report by the Department of State’s Future of Iraq Project of May 2002 as stating, “The Iraqi Army of the future cannot be an extension of the present army, which has been made into a tool of dictatorship.”[4] Yet this did not constitute clear policy guidance that the army should be disbanded, as Bremer apparently would have readers interpret it, and the implication that the State Department either suggested or supported the decision lacks an evidentiary basis. By all accounts, the order originated within the Pentagon.

A document entitled “Rebuilding the Iraqi Military” produced by the Office of the Secretary of Defense (OSD) and Joint Chiefs of Staff and dated January 21, 2002 recommended the de-Ba’athification of the military, but specifically suggested retaining the regular army.[5]

A paper produced by the Joint Chiefs of Staff entitled “Reshaping the Iraqi Military” from March 7, 2003 explicitly stated that the regular army should be maintained, with bullet points reading, “Cannot immediately demobilize 250K-300K personnel and put on the street”, and “Use as national reconstruction force during transitional phase”.[7]

Another document produced by the OSD on May 7, 2003, entitled “Draft Policy Guidance: De-Baathification of Iraq” outlined the policy of banning full party members from employment in the public sector or as teachers, and called for “the dismantling of Saddam-era intelligence and security services”. Among the agencies specifically slated for dismantling were “the Special Security Organization, the Iraqi Intelligence Service, General Directorate for Military Intelligence, and Feda’iyyi-Saddam” – but not the regular army.[8]

All four of these documents were discussed at daily meetings held in the Pentagon and chaired by the staff of the National Security Council, [9] making clear that Bremer was being less than truthful in implying that the decision to disband the military was widely discussed and approved by top officials. Then vice chairman of the Joint Chiefs of Staff Gen. Peter Pace, for further instance, told the New York Times, “We were not asked for a recommendation or for advice,” with regard to that decision.[10]

The picture that emerges is of a general consensus to retain the regular army, with discussion of disbanding it being limited to a select few that included Rumsfeld, Bremer, Wolfowitz, and Feith, who were in the know about a decision that was going to be made that directly contradicted the policy outlined by the generals and Joint Chiefs of Staff of maintaining the army to keep ex-Iraqi soldiers off the streets.

According to Bremer, he sent a report to President Bush on May 22, 2003, via Rumsfeld, reviewing the de-Ba’athification policy and stating, “I will parallel this step with an even more robust measure dissolving Saddam’s military and intelligence structures.” He also briefed Bush via secure video. The next day, Bremer asserts, Bush sent him a note thanking him for his report and stating, “you have my full support and confidence.”[11] But it isn’t clear that Bush was explicitly informed by Bremer of his intent to dissolve the regular army, or that Bush interpreted his stated aim of “dissolving Saddam’s military” to include such. On the contrary, Bush later told Robert Draper, author of the book “Dead Certain”, that “The policy had been to keep the army intact; [that] didn’t happen”.[12]

Less than a month later, on June 15, Bremer sent Rumsfeld a message with a subject heading asking “Should we pay the ex-military?” It stated, “We have been studying the problems that the disbanded Iraqi armed forces pose to force protection, general security, and law and order. When we dissolved the MOD and the old armed forces, we dismissed their employees. That has left some 230,000 officers and NCOs unemployed.” There were “tens of thousands, some of whom have been demonstrating in cities around Iraq protesting their not having been paid. This discontent among a respected group with training in weapons and with networks of contacts and loyalties presents a significant threat.”[13]

Such easily predictable consequences were no doubt precisely why the OSD and Joint Chiefs had specifically warned against immediately demobilizing hundreds of thousands of Iraqi soldiers and putting them “on the street”.

On April 21, 2006, the New York Times reported that the decision to disband the Iraq army “was approved by Mr. Rumsfeld.”[14] Three days later, Rumsfeld circulated a memo saying that statement “does not ring true to me”. Without outright denying that he had approved the order, he wrote, “It is difficult for me to imagine that I approved something of this nature without the kind of interaction we normally have around here that involves the Chairman or the Vice Chairman.” He requested a review of briefing and meeting notes.[15]

On May 24, Assistant Secretary of Defense Peter W. Rodman sent a memo including the OSD and Joint Chiefs of Staff documents discussed above, and reminding Rumsfeld that on May 19, 2003, “Ambassador Bremer informed you that he intended to issue an order dissolving Iraqi military and security organizations (including the regular army) as part of the de’Ba’athification effort.”[16]

While the decision-making process leading up to the issuing of Order #2 remains veiled in ambiguity, perhaps the most important facts now known are that Rumsfeld had been advised against putting Iraqi soldiers “on the street” and that he knew perfectly well that Bremer was going to issue an order contrary to that guidance, with predictable and immediately observable consequences. If Bremer had acted on his own, it is instructive that Rumsfeld neither rescinded the order nor disciplined Bremer for acting contrary to or outside of his instructions. These facts perhaps render the question of whether Rumsfeld explicitly authorized the decision moot. He was responsible for the decision either way.

But if Rumsfeld had indeed issued a directive contrary to the policy guidance he had received, and given the predictable consequences, it would explain his otherwise puzzling forgetfulness.

[6] “Draft Agreement between USG and ‘Iraqi Interim Authority’ (IIA),” Office of the Secretary of Defense, Department of Defense, March 3, 2003. Included as Tab B of Rodman Memo (see fn 4).

[8] “Draft Policy Guidance: De-Baathification of Iraq,” Office of the Secretary of Defense, Department of Defense, May 7, 2003. Included as Tab D of Rodman Memo.