Has Anyone in the Obama Administration Ever Read the U.S. Constitution?

According to President Obama, he has no higher duty than to protect the American people.  But that’s not what the Constitution says.

“As President, I have often said that I have no greater responsibility than protecting the American people,” wrote President Obama in the new “National Strategy for Counterterrorism” (pdf) that was released by the White House yesterday.  A similar sentiment appears in the Introduction to the new Strategy, which states that the President “bears no greater responsibility than ensuring the safety and security of the American people.”

This seems like a fateful misunderstanding.  As chief executive and commander in chief of the armed forces, the President obviously has responsibility for national security.  But to claim that he has no greater responsibility than “protecting the American people” is a paternalistic invention that is historically unfounded and potentially damaging to the political heritage of the nation.

The presidential oath of office that is prescribed by the U.S. Constitution (Art. II, sect. 1) makes it clear that the President’s supreme responsibility is to “…preserve, protect, and defend the Constitution of the United States.”  There is no mention of public safety.  It is the constitutional order that the President is sworn to protect, even if doing so entails risks to the safety and security of the American people.

In prepared remarks announcing the release of the National Strategy for Counterterrorism, Assistant to the President for Homeland Security and Counterterrorism John O. Brennan said that “terrorist organizations, and the nations that support them” were seeking to “capitalize on the instability” resulting from the uprisings in the Middle East and North Africa. The Obama administration was working “to make sure that these malevolent actors do not succeed in hijacking this moment of hope for their own violent ends.” 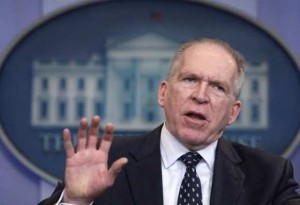 The U.S. is, of course, hijacking the insurrection in Libya for its own violent ends. Brennan characterized the uprising of armed rebels in Libya as a “peaceful protest”, saying, “For decades, terrorist organizations like al-Qa’ida have preached that the only way to affect change is through violence. Now that claim has been thoroughly repudiated, and it has been repudiated by ordinary citizens, in Tunisia and Egypt and beyond, who are changing and challenging their governments through peaceful protest, even as they are sometimes met with horrific brutality, as in Libya and Syria.”

The same day Brennan issued his remarks, the New York Times reported that the U.S.’s ally in the Obama administration’s unconstitutional war on Libya, France, had supplied arms to the rebel forces, whose early “peaceful protest” included attacking, looting, and burning public buildings such as police stations and military posts, where they confiscated weapons and launched and armed rebellion against the Gaddafi regime.

The U.S. Constitution, Article I, Section 8 states that the Congress — not the Executive branch — has the Power to declare war. The War Powers Resolution states that the President may only send the military into “hostilities” if the Congress has declared war or explicitly authorized the use of force, or if the U.S. has been attacked.  The Obama administration has argued that its war on Libya is not unconstitutional because there are no U.S. troops on the ground and Libya has no effective deterrent to U.S./NATO airstrikes, and it thus does not constitute “hostilities”. Bombing another country does not constitute a “war”, the administration has effectively argued, so long as that nation is totally defenseless against the attack.

Brennan’s words are also starkly contrasted by U.S. actions elsewhere, such as in Bahrain, where its naval fleet is based. The U.S. backed the regime against the protestors to the extent that it gave a green light to Saudi Arabia to send in its own military forces to help crush the uprising. Brennan also spoke of the U.S.’s “counterterrorism cooperation with Yemen”, where the regime has similarly quashed peaceful protests against the regime.