David Frum, the Bush speechwriter who wrote Dubya’s “Axis of Evil” line, doesn’t like Ron Paul for president, and doesn’t think you should, either. He makes a pretty convincing case. Let’s look. Paul is “a boutique candidate, appealing to a very particular fringe within the GOP.” Yes, we wouldn’t want to vote for a “fringe” […]

David Frum, the Bush speechwriter who wrote Dubya’s “Axis of Evil” line, doesn’t like Ron Paul for president, and doesn’t think you should, either. He makes a pretty convincing case. Let’s look. 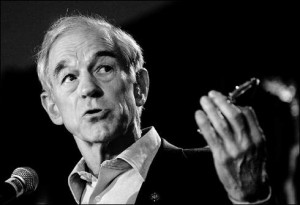 Paul is “a boutique candidate, appealing to a very particular fringe within the GOP.” Yes, we wouldn’t want to vote for a “fringe” candidate, like the only anti-establishment candidate, who has won more straw polls than his competitors and gets more support from members of the military. Would we?

“Some see him as a corrective to militaristic nationalism. Or as a principled champion of limited government. Or as a leader who can curb the excessive influence of social conservatives.” But, Frum argues, these “perceptions” are “not very realistic”. How shocking to learn that Paul isn’t really opposed to needless wars and empire and doesn’t really champion limited government. To think his consistency of saying the same things for 30 years had me believing these misconceptions. It’s a good thing we have brilliant guys like David Frum to lead us stray sheep back onto the straight and narrow path.

Frum’s next argument is a reiteration of one I keep hearing a lot, the gist of which is that Ron Paul loves the rich and doesn’t care about the poor and middle class America. Here’s Frum’s variation on the theme:

The thing most wrong with present-day Republicanism is its passivity in the face of the economic crisis, its indifference to the economic troubles of the huge majority of the American population, and its blithe insistence that everything was fine for the typical American worker up until Inauguration Day 2009 or (at the outer bound of the thinkable) the financial crisis of the fall 2008. It is the lack of concern to the travails of middle-class America that “reform Republicans” should most centrally be concerned with. And no candidate in this race – okay, except maybe the defunct Herman Cain – has been more persistently, aggressively, and forcefully heedless of those travails than Ron Paul.

To think I was under the impression that Ron Paul —who is chairman of the Financial Services Subcommittee on Domestic Monetary Policy and Technology and serves on the House Committee on Foreign Affairs and Financial Services and the Joint Economic Committee—cared very much about the economic troubles of America. To think I was under another one of those wrongheaded “perceptions” that this was why he was repeatedly warning the country for nearly a decade before the collapse about the housing bubble and railing against the policies that caused it, and why he has always railed against the Federal Reserve system for its monetary inflation that destroys the purchasing power of the dollar and thus acts as a hidden tax that hurts the poor and is helping to wipe out the middle class. But now, at least, I see the light.

Beyond the above, Ron Paul suffers “paranoia” and has “crank theories”.  Frum doesn’t offer any examples of the former, but given the brilliance of his above arguments, I know it must be true. He gives one example of a “crank theory”. Ron Paul argues “the need for tighter money and higher interest rates”, which “should seem obviously nuts”. Unfortunately, Frum doesn’t explain for us mere mortals why it is crazy to think that the Fed’s inflationary monetary policy and artificially low interest rates that caused the housing bubble and 2008 financial crisis cannot also be the solution for it, like injecting more heroin into the drug addict to cure the symptoms of withdrawal from his addiction. But I’m sure Frum wouldn’t say that the view of the only guy in Washington to predict and warn about the collapse for a decade beforehand was “nuts” if it wasn’t true.

The “bigger” problem is not Ron Paul himself, but “the gravitational pull Paul exerts” on people, which is the “real shame”. To think I was among those who had been led astray. It’s so comforting to know there are good shepherds like David Frum to lead us stray sheep back to the flock with their infinite wisdom and intellectual prowess.