The Media is Incapable of Challenging Ron Paul on REAL Issues

This is the kind of asinine logic (or illogic, rather) that the media is insulting their audience’s intelligence with. Wouldn’t it be wonderful if the mainstream media actually reported on the candidate’s actual views and positions on real issues? 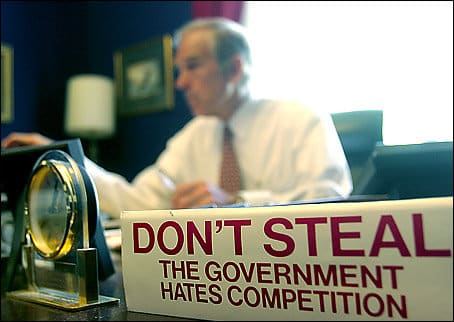 Man, the establishment is really getting nervous about Ron Paul, and are pulling out all the stops trying to drill into Americans’ heads that he is some kind of bigoted extremist. The means by which they communicate this message are instructive. They don’t ever show Dr. Paul saying anything racist or bigoted, for the obvious reason that they can’t find him ever having done so, but instead attack Dr. Paul on the basis of what other people believe.

The latest incarnation of this smear tactic comes from Mike Rogers, managing direct of Raw Story, on The Ed Show. The charge is that a Reverend Phillip G. Kayser endorsed Ron Paul, and Dr. Paul’s campaign welcomed his endorsement. However, Kayser is a bigot who has written that homosexuality should be a crime in accordance with “Biblical law”, punishable by death. So the implicit logic we are supposed to accept is that since Dr. Paul’s campaign welcomed his endorsement, he therefore must also welcome Kayser’s bigoted views. So we should therefore not vote for him.

Now, the intelligent, rational, free-thinking individual would first ask: What was the endorsement? Did Kayser endorse Dr. Paul on the grounds that Dr. Paul is also a bigot who believes gay people should be executed?

The answer, of course, is “No.” In Kayser’s statement, he said he supported Ron Paul because: (1) “[H]e is the only candidate who holds to a strict constructionist interpretation of the Constitution”; (2) “[H]e is the only candidate that has a consistent philosophy of economics that will truly resolve America’s problems”; (3) “Ron Paul’s strictly Constitutional civics is far closer to Biblical civics than any of the other candidate’s on a whole range of issues including non-interventionism in international politics, limitations on what can be a crime, limits of jurisdiction, the rights of interposition and civil resistance, inflation, banking cartels, the national identity card, the American Community Survey, the use of torture by the military, etc.” His statement concluded, “Even though I strongly disagree with him on some issues, he is the only candidate that I can endorse.”

This is the kind of asinine logic (or illogic, rather) that the media is insulting their audience’s intelligence with. Wouldn’t it be wonderful if the mainstream media actually reported on the candidate’s actual views and positions on real issues?