So basically Krugman's argument is that spending on social "safety net" programs and jobs (i.e., "stimulus") and bank bailouts is supposed to counted and is considered part of "Big Government" if the economy seems to be improving; but if things aren't looking so good, then we must ignore them completely and blame the situation on "austerity" rather than "Big Government".

This is hilarious. Okay, you need a bit of background first. Briefly, Paul Krugman is all about blaming Europe’s problems on “austerity”, and then Veronique de Rugy at the Mercatus Center of George Mason University produced a chart showing that European governments haven’t really cut spending at all. In fact, spending in every country but Greece was higher in 2011 than in 2008. (I had made a similar observation in the case of Ireland in response to a Krugman column.) 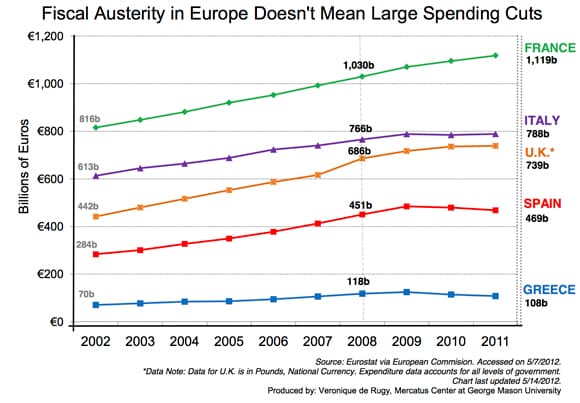 So Paul Krugman responded to this by writing (emphasis added):

The latest in the attempt to make excuses for the abject failure of austerity is the claim that European countries didn’t really practice austerity after all….

But I have to say that the responses I’ve seen have been surprisingly weak – some people who should know better are conceding the point that maybe there haven’t been big spending cuts. Yes, there have.

For the fact is that you can’t just look at spending levels to ask what is happening to spending programs. Here in the United States spending on unemployment insurance and food stamps has risen sharply, not because the welfare state has expanded, but because a lot more people are unemployed and poor. Similar effects are at work in European countries, which have stronger safety nets than we do. Also, some spending represents banking bailouts, not exactly what people have in mind when they talk about big government….

Notice that his argument boils down to saying that spending increases on welfare due to higher unemployment and increasing poverty doesn’t count in terms of determining whether there is “austerity” or not. Spending to bail out banks also doesn’t count. So if you just totally ignore this kind of spending and completely eliminate it from the equation, then you could argue that “there have” been “big spending cuts”, and, says Krugman, “Don’t believe the usual suspects when they say different. In fact, don’t believe the usual suspects when they say anything at all”–“the usual suspects” apparently meaning anyone who dares to challenge Krugman’s analysis of the situation.

So Robert P. Murphy did us the fine service of digging up an older column of Krugman’s in which he wrote (emphasis added):

So it seems that we aren’t going to have a second Great Depression after all. What saved us? The answer, basically, is Big Government….

So what saved us from a full replay of the Great Depression? The answer, almost surely, lies in the very different role played by government.

Probably the most important aspect of the government’s role in this crisis isn’t what it has done, but what it hasn’t done: …the federal government hasn’t slashed spending as its income has fallen…. Tax receipts are way down, but Social Security checks are still going out; Medicare is still covering hospital bills; federal employees, from judges to park rangers to soldiers, are still being paid….

All of this has helped support the economy in its time of need…. And yes, this means that budget deficits — which are a bad thing in normal times — are actually a good thing right now.

In addition to having this “automatic” stabilizing effect, the government has stepped in to rescue the financial sector. You can argue (and I would) that the bailouts of financial firms could and should have been handled better, that taxpayers have paid too much and received too little. Yet it’s possible to be dissatisfied, even angry, about the way the financial bailouts have worked while acknowledging that without these bailouts things would have been much worse.

The point is that … the government didn’t take a hands-off attitude while much of the banking system collapsed. And that’s another reason we’re not living through Great Depression II.

Last and probably least, but by no means trivial, have been the deliberate efforts of the government to pump up the economy. From the beginning, I argued that the American Recovery and Reinvestment Act, a k a the Obama stimulus plan, was too small. Nonetheless, reasonable estimates suggest that around a million more Americans are working now than would have been employed without that plan — a number that will grow over time — and that the stimulus has played a significant role in pulling the economy out of its free fall.

All in all, then, the government has played a crucial stabilizing role in this economic crisis. Ronald Reagan was wrong: sometimes the private sector is the problem, and government is the solution.

And aren’t you glad that right now the government is being run by people who don’t hate government? …

I’m still very worried about the economy. There’s still, I fear, a substantial chance that unemployment will remain high for a very long time. But we appear to have averted the worst: utter catastrophe no longer seems likely.

And Big Government, run by people who understand its virtues, is the reason why.

So basically Krugman’s argument is that spending on social “safety net” programs and jobs (i.e., “stimulus”) and bank bailouts is supposed to be counted and is considered part of “Big Government” if the economy seems to be improving; but if things aren’t looking so good, then we must ignore them completely and blame the situation on “austerity” rather than “Big Government”.