It Isn’t the Taliban Trafficking Drugs Through Northern Afghanistan…

Here are some key findings from the U.N. Office on Drugs and Crime’s (UNODC’s) latest report on the Afghanistan opium trade:

Here are some key findings from the U.N. Office on Drugs and Crime’s (UNODC’s) latest report on the Afghanistan opium trade:

There are an estimated 40-50 active heroin laboratories in northern Afghanistan, notably in Badakhshan province.

And here’s a map: 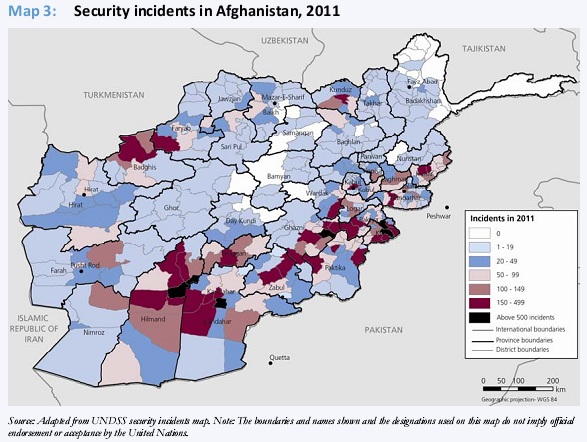 Notice that Badakhshan (upper right) is an area of relatively high security (i.e. little Anti-Government Element activity, e.g., Taliban). The occupying NATO military forces have had this province under their control (until it was handed over to local forces earlier this year).

In Afghanistan, the involvement of Taliban insurgents in the drug trade is evident, particularly in the south, and has been detailed in previous UNODC research. However, excessively focusing on insurgents’ linkages with the drug trade risks obscuring the deeper involvement of corrupt governmentofficials in the Afghan opiate trade. In northern Afghanistan, many actors who in previous years had been involved in opiate trafficking have now become public officials, politicians and businessmen. Some of these stakeholders continue to be involved in drug trafficking, making high-level corruption another important cog in the large wheel of organized crime in Afghanistan….

The “majority of Northern route opiates continues to flow nearly uninterrupted into Tajikistan”, and is trafficked by “large, well-organized groups”, which trafficking “mostly occurs by road”.