Understanding the Framework on Iran: Rights Derive from Washington

What Washington says goes, regardless of what international law has to say about it. 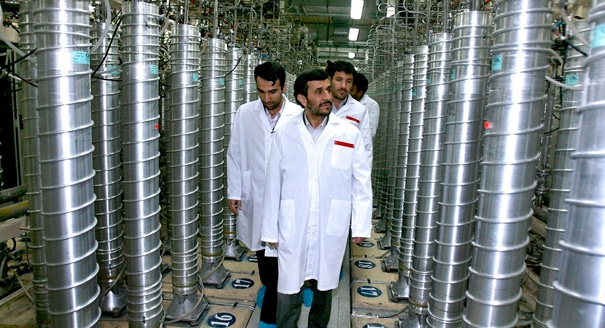 On the failure of the P5+1 talks with Iran over its nuclear program, the New York Times says (emphasis added):

The chief Iranian negotiator, Saeed Jalili, the secretary of Iran’s National Security Council and the personal representative of Ayatollah Ali Khamenei, Iran’s supreme leader, described the talks as positive. But he suggested in his remarks to reporters that the main obstacle was the other side’s refusal to accept Iran’s claimed right to enrich its own nuclear fuel, which it has continued to do despite four Security Council resolutions demanding a suspension.

“This is our right, and it is clearly irrefutable,” Mr. Jalili said. If the six powers accept such a right, he said, “we will, of course, welcome some offer to cooperate on.”

The six counter that the Nuclear Non-Proliferation Treaty has no explicit “right to enrich,” only the right to a civilian nuclear program under strict supervision by the International Atomic Energy Agency, and that Iran has been out of compliance.

The Times parrots the U.S. position that Iran “has no explicit ‘right to enrich’”, but doesn’t bother to point out to readers what the truth is (it’s not a matter of opinion). The Nuclear Non-Proliferation Treaty (NPT) of which Iran is a member states in Article IV (emphasis added):

Nothing in this Treaty shall be interpreted as affecting the inalienable right of all the Parties to the Treaty to develop research, production and use of nuclear energy for peaceful purposes without discrimination and in conformity with Articles I and II of this Treaty.

Articles I and II of course forbid member nations from working on nuclear weapons. Uranium enrichment is of course included in “research, production and use of nuclear energy”, so as long as Iran is enriching uranium “for peaceful purposes”—as it has been—then enrichment is an “inalienable right”.

The safeguards required by this Article shall be implemented in a manner designed to comply with Article IV of this Treaty, and to avoid hampering the economic or technological development of the Parties or international co-operation in the field of peaceful nuclear activities, including the international exchange of nuclear material and equipment for the processing, use or production of nuclear material for peaceful purposes in accordance with the provisions of this Article and the principle of safeguarding set forth in the Preamble of the Treaty.

That means neither the IAEA nor the U.N. may do anything to prejudice Iran’s “inalienable right” to enrich uranium for peaceful purposes. The U.N. sanctions resolutions against Iran are themselves illegal, having been passed without any authority from the U.N. Charter to do so and in violation of the NPT.

But never mind trivial details like that. The U.S.’s rules trump international treaties. What Washington says goes, regardless of what international law has to say about it. The Times accepts that framework, and it is within that framework that it reports on events in the world.

The proposal of the six centered on getting Iran to suspend enrichment to 20 percent, to export its current and continuing stock of 20 percent enriched uranium and to open up its once-secret Fordo enrichment plant to international inspection. But Iran did not consider the benefits offered for doing so to be sufficient.

This is dishonest. For one, it’s an extremely simplified version of events to begin with, but the suggestion that Iran hasn’t opened up its Fordo enrichment plant is false. Iran has allowed the IAEA to inspect the site, and the IAEA and “All nuclear material in the facility remains under the agency’s containment and surveillance”.

And notice how they throw in the “once-secret” there. Ooh. That sounds very shady. All that really means, though, is that before Iran declared the site to the IAEA in accordance with its obligation to do so at least six months prior to the introduction of uranium into its enrichment centrifuges, the site was unknown to the IAEA.

I know, it’s a disappointing anti-climactic fact. Disclosing this to their readers would surely make for more boring news, so naturally the Times keeps this fact, um, secret.

(Oh, and every time you hear that the U.S. and friends “revealed” the site, that refers to a press conference they gave denouncing the “secret” site three days after Iran had declared it to the IAEA. But, shh, that’s a secret, too. You aren’t supposed to know.)

As I’ve written about repeatedly, the U.S. is not serious about talks with Iran, and the most recent round of talks was destined to fail because Iran continues to insist on its rights under the NPT while the U.S. position consists of an ultimatum that Iran must bow to Washington and surrender its rights. The U.S. is demanding that Iran cease enrichment and dismantle its Fordo facility. The Times states (emphasis added):

In return for early Iranian steps to freeze 20 percent, the six offered benefits like spare parts for civilian aircraft, help with nuclear safety at civilian installations, and perhaps a pledge that Iran has the right to a peaceful nuclear program so long as it resolves doubts about its intentions through serious, detailed, technical negotiations with the six and through openness with the inspectors of the International Atomic Energy Agency.

What that means, translated into meaningful terms, is that Iran must first bow down to the U.S., the one true Lord of the Universe, and renounce its “inalienable right” to enrich uranium under the NPT and open up its facilities, including sensitive military sites like Parchin, to inspections above and beyond that required under its safeguards agreement with the IAEA. Only then will the U.S. in its benevolence perhaps­­—just maybe—consider granting Iran the privilege of enriching.

And if Iran continues in its heresies of insisting on its internationally recognized rights, it must be severely punished.