In his latest column for the New York Times, Paul Krugman has an astonishingly Orwellian take on government spending.

In his latest column for the New York Times, Paul Krugman has an astonishingly Orwellian take on government spending. He writes (emphasis added):

What should be done about the economy? Republicans claim to have the answer: slash spending and cut taxes. What they hope voters won’t notice is that that’s precisely the policy we’ve been following the past couple of years. Never mind the Democrat in the White House; for all practical purposes, this is already the economic policy of Republican dreams.

So according to Krugman, the Obama administration has slashed spending and cut taxes. He continues:

So the Republican electoral strategy is, in effect, a gigantic con game: it depends on convincing voters that the bad economy is the result of big-spending policies that President Obama hasn’t followed (in large part because the G.O.P. wouldn’t let him), and that our woes can be cured by pursuing more of the same policies that have already failed.

So according to Krugman, Obama “hasn’t followed” “big-spending policies”, and “our woes” can be blamed on this opposite policy of slashing spending and cutting taxes. He goes on:

For some reason, however, neither the press nor Mr. Obama’s political team has done a very good job of exposing the con.

What do I mean by saying that this is already a Republican economy? Look first at total government spending — federal, state and local. Adjusted for population growth and inflation, such spending has recently been falling at a rate not seen since the demobilization that followed the Korean War.

How is that possible? Isn’t Mr. Obama a big spender? Actually, no; there was a brief burst of spending in late 2009 and early 2010 as the stimulus kicked in, but that boost is long behind us. Since then it has been all downhill.

The link is to his blog, where he provides the following chart of “the rate of change of real government spending per capita (federal, state, and local)”: 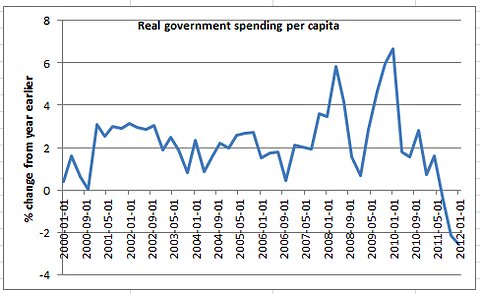 Gosh, look at that slashed spending, dropping through the floor like that. Here’s a longer-term look at the same data: 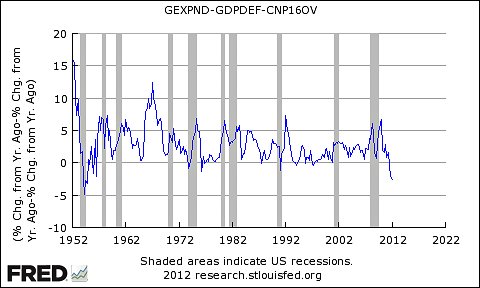 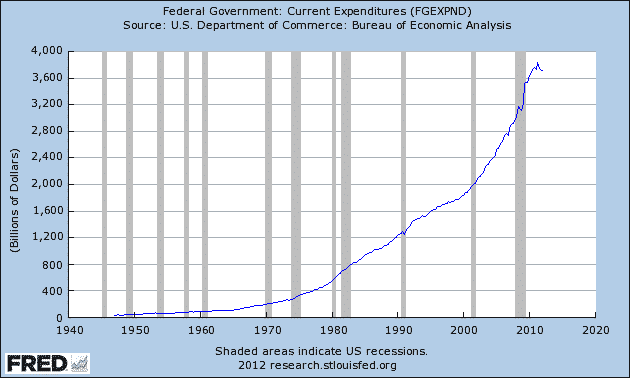 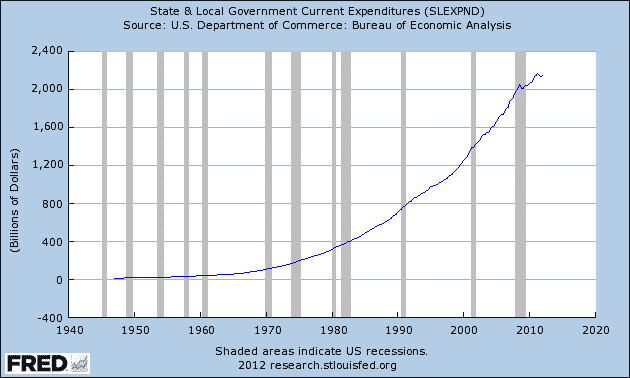 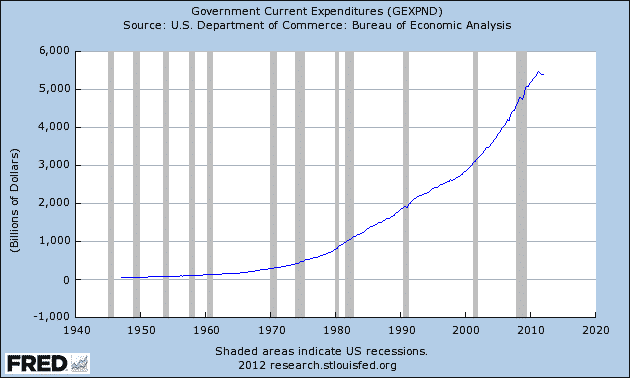 Gosh, would you look at all that austerity? If you can’t see it, try using a magnifying glass. Here’s a chart of past, present, and future government spending from USGovernmentSpending.com: 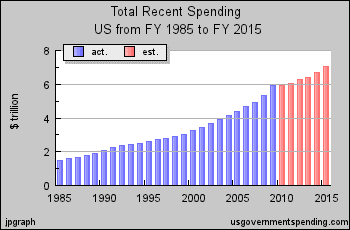 Here is what the Congressional Budget Office has to say about Obama’s budget in its most recent projection: 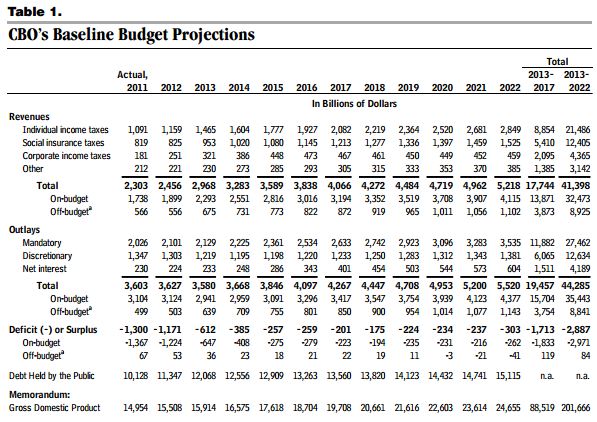 So a budget deficit of $1.2 trillion for fiscal year 2012 isn’t enough to make Obama a “big spender”. Krugman would have you believe Obama’s budget takes the country “all downhill” in terms of spending. What do you see? I tell you what, perhaps I need my eyes examined, but I see a spending increase from last year, and I see additional spending increases projected every year, with one exception, for the next decade.

The CBO does project a reduction of the deficit, but let’s look at why it does so, keeping in mind Krugman’s suggestion that Obama has been responsible for cutting taxes (emphasis added):

Much of that projected decline occurs because, under current law, revenues will rise considerably as a share of GDP–from 15.8 percent in 2012 to 19.8 percent in 2014 and 21.2 percent in 2022. In particular, in CBO’s baseline, revenues shoot up by more than 30 percent over the next two years, mostly because of the recent or scheduled expirations of tax provisions–such as those that reduce income and payroll tax rates and limit the reach of the alternative minimum tax (AMT)–and the imposition of new taxes, fees, and penalties that are scheduled to go into effect.

So the reason the CBO projects a reduction in the deficit is in large part because the Obama administration is going to increasingly tax the crap out of Americans in order to increase revenues to pay for its increasing spending. (I say “in large part” because there’s another important caveat, which is that the CBO bases its projections on the rather dubious assumption of economic recovery.)

What was that about it being “all downhill” from here?

Since we looked at expenditures, we might as well look at government receipts from FRED, too: 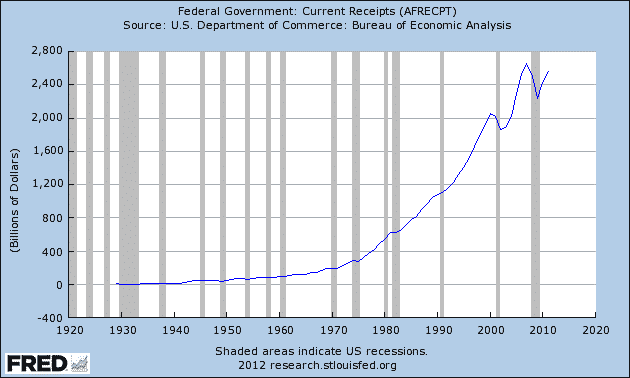 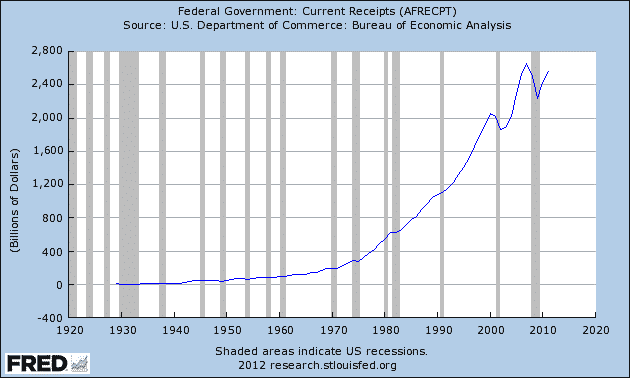 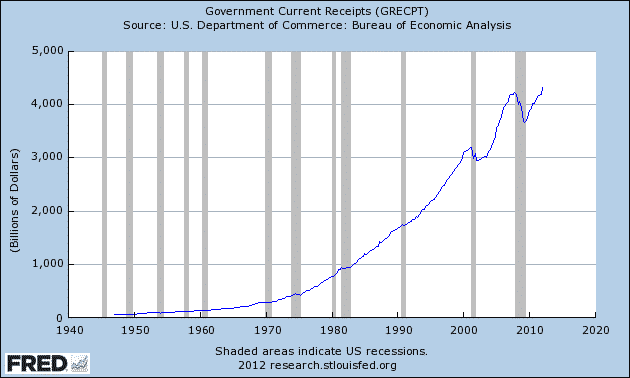 But Americans aren’t taxed enough for Paul Krugman, who wants the government to take even more of your money, because he thinks government bureaucrats know better than you how to spend your hard-earned dollars.

Over all, the picture for America in 2012 bears a stunning resemblance to the great mistake of 1937, when F.D.R. prematurely slashed spending, sending the U.S. economy — which had actually been recovering fairly fast until that point — into the second leg of the Great Depression.

Jonathan M. Finegold Catalan comments on the myth of the version of history Krugman is propagating here:

That the deficit of 1937 was smaller than that of 1936 is undeniable. In 1937 the deficit stood at $2.2 billion, as compared to a deficit of $4.3 billion in 1936. However, it is also noteworthy that, while the deficit was half as much as that of the previous year, total government outlays decreased from $8.2 billion to only $7.6 billion.

Interestingly, during 1935 — a year considered one of recovery — total government outlays measured $6.4 billion, less than during both 1936 and 1937. In fact, looking back to the years from 1933 to 1935, government spending peaked at $6.5 billion in 1934. It suffices to say that explaining Roosevelt’s recession by pointing at a decrease in government spending is severely dishonest.

Finally, while government spending did decrease between 1936 and 1937, total expenditure in 1937 was still greater than all years prior to 1936. If a contractionary fiscal policy led to a recession in 1937, how did less spending cause recovery only a few years earlier? This inchoate theory does not hold water.

That same obstructionist House majority effectively blackmailed the president into continuing all the Bush tax cuts for the wealthy, so that federal taxes as a share of G.D.P. are near historic lows….

Let’s see what he had to say about the Bush tax cuts in 2002 (emphasis added):

In 2000 the bubble finally burst. As investors and businesses rediscovered the law of gravity, business investment plunged, and the economy slumped. Then the situation stabilized, more or less. Repeated interest rate cuts encouraged families to buy new houses and refinance their mortgages, putting cash in their pockets; yes, the tax cut also made a marginal contribution. Strong housing demand and consumer spending partly offset the lack of business investment. And so the economy began growing again.

So in 2002, Krugman begrudgingly admitted that the Bush tax cuts contributed to preventing an even deeper recession following the collapse of the dot-com bubble.

Which brings me back to Krugman’s comment about the delusion that “our woes can be cured by pursuing more of the same policies that have already failed.”

Isn’t it interesting how even though spending has continuously increased, Krugman thinks even more spending will solve the problem?   And speaking of trying to solve problems with more of the same policies that caused them, here is something else Krugman had to say in 2002:

To fight this recession the Fed needs more than a snapback; it needs soaring household spending to offset moribund business investment. And to do that, as Paul McCulley of PIMCO put it, Alan Greenspan needs to create a housing bubble to replace the NASDAQ bubble.

I review Krugman’s record on the housing bubble in my book, Ron Paul vs. Paul Krugman. Paul Krugman’s prescriptions are the problem. They can’t surely at the same time be the cure.

Oh, here’s one more doozy from Krugman in his most recent column:

And remember those dire warnings about inflation and the “debasement” of the dollar? Well, inflation remains low, and the dollar has been stronger than it was in the Bush years.

And for another indication of how much the dollar has done, here’s the price of gold over the years: 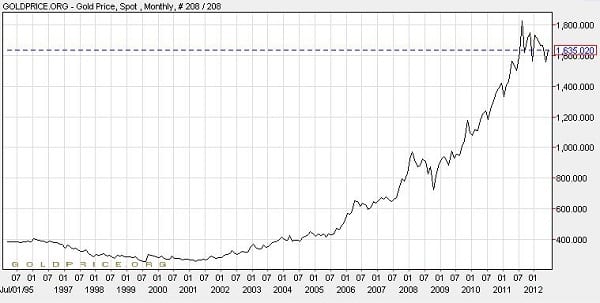