You don’t need to actually think to support Krugman

The only reason to choose increasing government spending over cutting it would be if we accepted the assumption that government bureaucrats know better than the free market how to direct scarce resources to the most productive ends.

Samuel Brittan writes in the Financial Times that “You don’t need to be a lefty to support Krugman”. In this op-ed, draws the “moral” from Paul Krugman’s book End This Depression Now! that

The remedy for too little spending is more spending. Everything else is commentary.

Well, I have some “commentary” on that.

First of all, what’s wrong with people not spending? How much spending is “too little”, and what’s wrong with saving, instead? After all, savings creates capital with which investments can be made in capital goods and improving the means of production to make more goods cheaper, which raises society’s standard of living.

But Brittan unquestioningly accepts that “too little spending” is bad and thus that the answer is to spend more. The trouble is, he writes, parroting from Krugman’s book, that

Consumers will not spend because of a backlog of indebtedness and businesses will not invest because of pessimism about market prospects.

Now, hold it right there.

So Brittan accepts Krugman’s argument (1) that consumers are not spending and (2) that this is a bad thing.

But it’s just not true that consumers “will not spend”. Here is what personal consumption expenditures looks like: 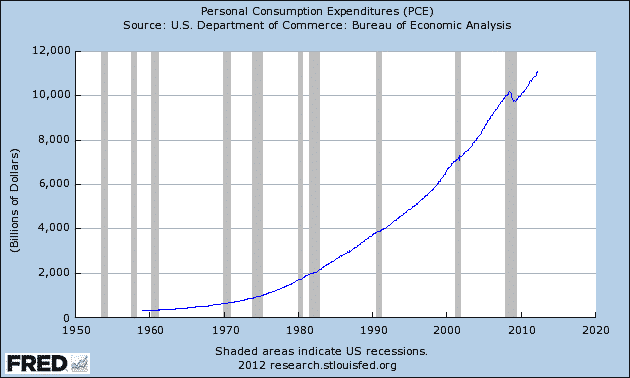 Here’s another graph of personal consumption expenditures as a share of GDP:

This second graph actually comes from an interesting source: the Federal Reserve Bank of St. Louis, in a report from January of this year that has the following highly relevant information to share:

Standard economic-growth theory suggests that an economy must continuously invest in new capital goods and structures in order to grow, become more productive and raise citizens’ living standards over time. Empirical evidence confirms the prediction that economies that invest a higher share of their incomes (or that have access to relatively inexpensive investment goods, which presumably results in more investment) tend to grow at faster rates.2 If consumer spending “crowds out” investment spending, the economy may not grow as fast.

Indeed, during our own economic history, higher investment generally has been associated with lower consumer spending, and vice versa, where both are measured as shares of GDP….

[T]he relationship between the share of U.S. GDP accounted for by consumer spending and the rate of economic growth generally has been inverse—that is, they are negatively correlated….

The correlation between the share of U.S. GDP accounted for by private investment spending and the rate of economic growth generally has been positive….

In sum, the primary reason a consumer-dominated economy may not be desirable is that consumer spending may crowd out investment spending, which is a key determinant of long-term growth.

But Brittan continues with Krugman’s argument that “This leaves governments to fill the gap.” That is to say, since consumers are not spending, therefore the government should spend more to make up for it. This raises the question:

Where will they get the money from? Governments of countries that have the good fortune to run their own currencies can borrow as much as required whether directly or indirectly from their central banks. But won’t this “printing of money” be inflationary? Yes, in normal times. But not when there is an ever-widening pool of unemployed people and of unused capacity.

So to pay for this spending, all the government has to do is issue a bunch of interest-bearing Treasury securities (IOUs) that the Fed will purchase by creating the “money” to pay for them out of thin air.

As Mr Krugman says: “The government is simply finding a use for the excess of what the public wants to save over what it is willing to invest.”

What does that even mean? Can you decipher it?

The “excess” apparently means the money people choose to save rather than spend—or, to put it more precisely, the spending people choose to defer to the future. To “invest” apparently just means to “spend”. It may also mean to “invest” more literally, but assuming this is what Krugman means, it is a fallacy to draw a line between two distinct piles of money, one consisting of “excess” savings and the other money to be invested. Why? Because most people who save their money put it into a bank account, where it can then be lent out to others. So if savings rates are high and interest rates are consequently low, entrepreneurs will borrow to start up new businesses or expand existing ones, such as by investing in capital goods.

Of course, that is assuming free market conditions, which we don’t actually have. Instead, we have interest rates set artificially by the Federal Reserve. This artificial manipulation of interest rates is what created the housing bubble. The Fed’s artificially low interest rates sent the signal to entrepreneurs and investors that savings rates were high and capital available to invest in capital goods or assets—housing, in this case. Only, the capital wasn’t actually there and so the boom that resulted was unsustainable. As prices rose, the malinvestment revealed itself and the bubble burst, precipitating the mess we currently find ourselves in.

Now, you will never hear Paul Krugman tell you this, because he was one of the leading voices calling for the Fed to inflate to artificially lower interest rates to create a housing boom following the collapse of the dot-com bubble. (For more on Krugman’s abysmal record on the housing bubble, please check out my book Ron Paul vs. Paul Krugman: Austrian vs. Keynesian economics in the financial crisis. Your purchase will help sustain my work.)

So even though Krugman’s prescription was the cause of the problem we are in now, now we are supposed to listen to him for the solution to get out of it. Does that sound like wisdom to you?

And what about the argument that more debt cannot possibly the solution? Brittan comments (and this is Brittan’s argument here, not Krugman’s):

A shopkeeper or private citizen who cannot make ends meet is unlikely to get out of his debts by borrowing more. These truisms are then wrongly applied to governments: a long-established logical error known as “the fallacy of composition”.

However, it is a logical fallacy itself to argue that it is in all cases a fallacy to draw an inference about the whole from its constituent parts. If the inference is justified, then, obviously, no fallacy is committed. So if one was to argue that since this rich guy has a nicer house than that poor guy, therefore rich people as a class have nicer houses than poor people, this is not a fallacy. It is a perfectly logical, common sense observation about the whole inferred from the characteristics of its individual members.

Now, Brittan would have you believe that it is a fallacy to argue that since an indebted household probably won’t get out of its problems by borrowing more, therefore the government probably won’t get out of debt by borrowing more, either. But how, exactly, is this inference no justified? How is it not rather a perfectly logical, common sense observation?

Further into his article, he says that Krugman’s book is not “perfect”, and that one of the two problems he has with it is that while Krugman argues for more government spending to supposedly increase demand, “demand could just as well be expanded by the tax-cutting route.”

“[D]emand could just as well be expanded by the tax-cutting route.”

What is Brittan saying here? Well, what he is saying is that Krugman’s whole argument is that people are choosing to save rather than to spend, so the government should borrow money to spend more to make up for this lack of spending; but if the problem is that people aren’t spending enough because things are tight, simply reducing taxes and letting them keep more of their own money, so they could then just spend it themselves rather than having the government take it from them by force to spend on their supposed behalf, which would also do the same job of encouraging more spending.

So what Brittan is saying here is that the opposite solution from that Krugman proposes would work just as well. If the government just cut spending so that it could reduce taxes, then people wouldn’t be so hard up for cash and would be spending more themselves.

So even if we were to assume that growth comes from spending, it doesn’t follow that the solution is to increase government spending. Even if we accepted this fallacy, it equally follows that another solution would be to cut spending and taxes. After all, for every tax dollar the government doesn’t spend, that is a dollar that will remain in the pocket of an American who can then spend it his or herself.

And the only reason to choose increasing government spending over cutting it would be if we accepted the assumption that government bureaucrats know better than the free market how to direct scarce resources to the most productive ends.

Now, if you buy that one, I’ve got some mortgage-backed securities to sell ya. Triple-A rated.