Recently, this individual, Paul, and I engaged in a few small debates on Facebook. He was posting his Keynesian prescriptions and I replied to challenge his point of view.

By “another”, of course, I mean other than Paul Krugman, whose abysmal record on the housing bubble you can read about in my book Ron Paul vs. Paul Krugman: Austrian vs. Keynesian economics in the financial crisis.

This other Paul is actually one of the people who motivated me to write that book. I had had a number of discussions on Facebook with a number of different people, including Paul, who all had just about the same things to say; namely, that Ron Paul was a loony who knows nothing of economics while Paul Krugman was a bright guy who we should listen to for prescriptions on how to get out of the financial mess we’re in. Shocked and awed by this rather Orwellian point of view, I decided to write an article to set the record straight. It grew into a short book.

Recently, this individual, Paul, and I engaged in a few small debates on Facebook. He was posting his Keynesian prescriptions and I replied to challenge his point of view. This culminated in him promising me he would post some information that would prove his arguments. Three posts followed.

In one of those posts, he made a comment something to the effect of: “There are still people who blame the Federal Reserve for creating the housing bubble. Wow.” I’m going from memory, so that’s not an exact quote, but that is an accurate paraphrase of what he said. The “Wow”, of course, was intended to convey that anyone who believed that the Fed was responsible must either be stupid or just plain ignorant. His comment was accompanied with a link to this article.

If you read that article, you’ll note that it doesn’t even discuss the Fed’s monetary policy. So I pointed this out to Paul in my reply to his post on his Facebook wall, along with a comment about how his condescending remark was all the more inappropriate given the fact his link didn’t even begin to address the Fed’s role.

A second of Paul’s posts argued that the cause of the housing bubble was deregulation, and to try prove it he provided this chart: 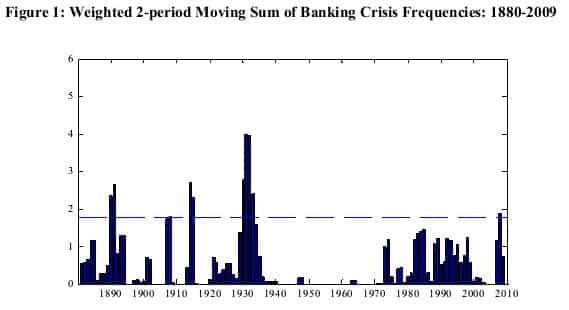 Paul’s argument was that this graph showed how there were no banking crises when banks were well regulated. He offered nothing more specific than that.

Now, Paul did not provide the source of his graph. But the image he linked to was at the Financial Times, so I managed to find the article it came from, which did mention the source of the graph, a report from the National Bureau of Economic Research (NBER), “The Global Financial Crisis of 2007-08: Is it Unprecedented?” by Michael D. Bordo and John S. Landon-Lane. I found the graph and noticed  it was not limited to the U.S., but was a chart of global banking crises.

More importantly, however, I found that the paper from which Paul’s chart had come in fact stated that the housing bubble “had been propelled by expansionary monetary policy and long standing government policies encouraging home ownership”.

So I replied to Paul’s post to point out that his own source in fact concluded the very opposite of what he was trying to argue.

I can’t remember what his third post was, but the same thing occurred, where he made an argument and posted something that was supposed to prove it, and I destroyed it.

Paul didn’t like that very much. He didn’t like it so much that he deleted all three posts, and all of our discussions that had preceded it, from his Facebook wall.

Now, that really bothered me, as you can imagine, so I unfriended him and a heated private message discussion followed in which he continued to try and argue with me and insist he was right. I pointed out that he wasn’t fooling anyone, and if he really honestly felt that he was winning the debate he wouldn’t have deleted it. I said I wasn’t going to debate him via private messages and challenged him to a public debate (this Paul is, like me, an independent journalist). He initially refused, but then relented and said, sure, let’s do it. And then he apologized and asked to refriend on Facebook, since even though we disagree on economics, he liked my writings on other topics (i.e., foreign policy). So I friended him again.

So what happened after that was was a repeat. He posted more of his Keynesian nonsense and I replied to point out the problems with his policy prescription of more government spending, and in the end he deleted the post. This time, however, knowing that Paul was dishonest and predicting this outcome, I kept my own record of it by taking screenshots. Here is the discussion that ensued before he deleted it (I’ve removed Paul’s profile image and last name): 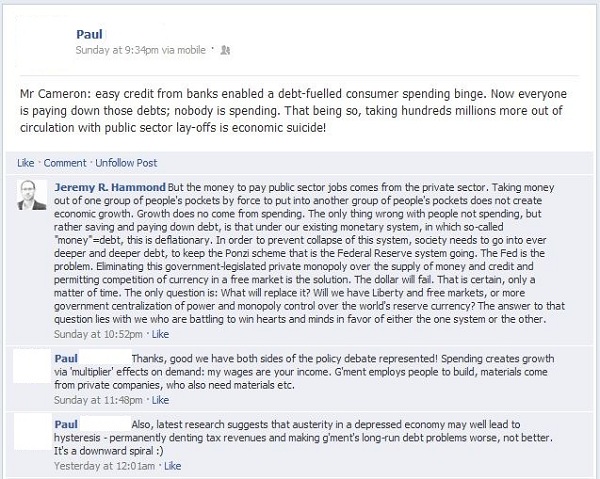 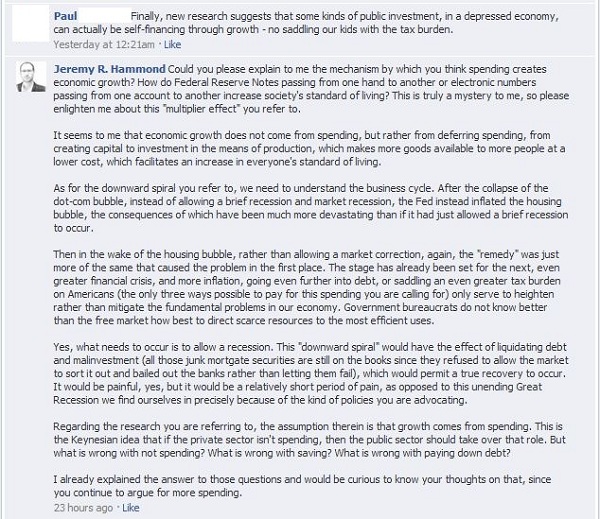 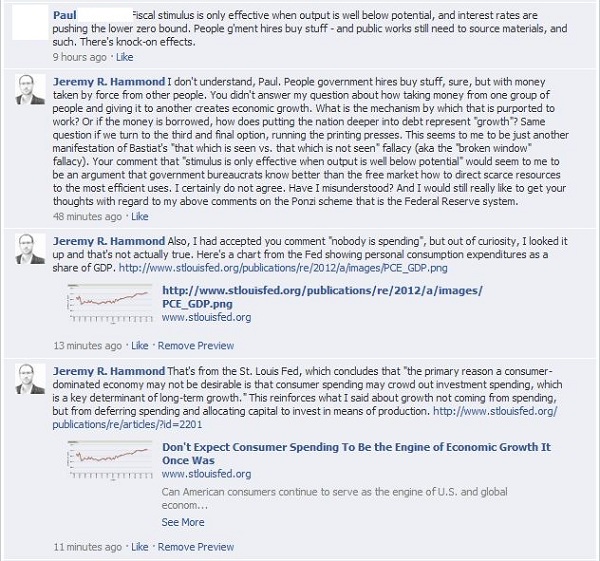 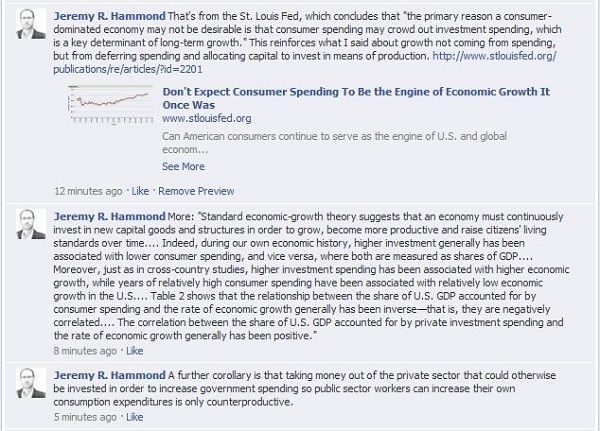 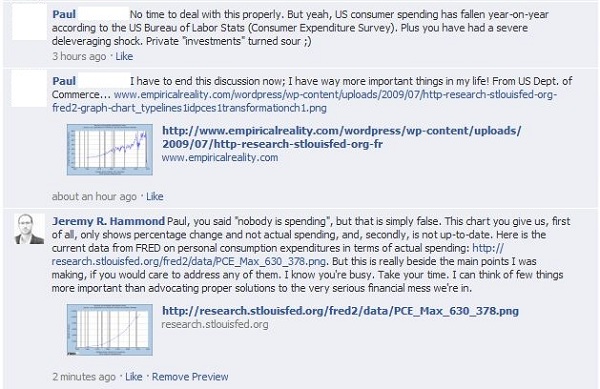 And that was the point where Paul deleted our discussion. And then, after he deleted all of the above, he messaged me privately to try to continue the argument, speaking to me as though he was winning the debate and I was the one being dishonest:

Notice how he suggests I was using spending figures “to ‘prove’ out-of-control g’ment” when in fact all of the spending figures I provided to him were of private spending, not government spending (of course, government spending is out of control, but the point here is that I wasn’t even making that point in this Facebook discussion). Paul had at this point just completely lost it, totally incapable of making a coherent argument. But he still insisted that he was right.

Now, you might conclude that Paul is delusional. I’m sympathetic to that view, but I think that if he was delusional, he wouldn’t have deleted his post, because he would have honestly believed that he was winning the debate. So I don’t think he’s delusional. I just think he’s plain, old-fashioned dishonest. He promised me a debate. I conclude from his deletion of our above discussion that he’s reneged. So in lieu of the debate he promised me, there is the above. My invitation to debate remains open, if he wishes to reveal his identify and go public with our discussion.