The murderous attack on civilian homes not only violated international law. It also violated U.S. agreements with the Karzai government. 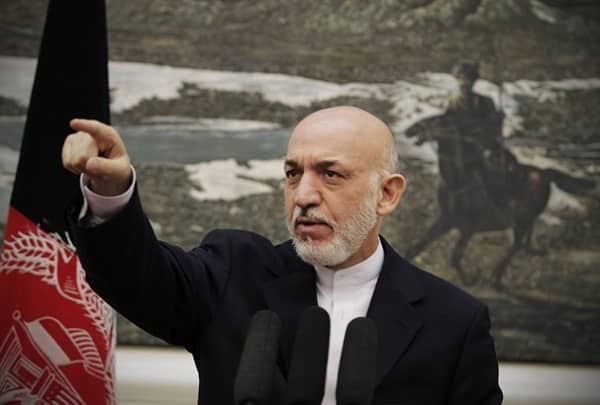 I previously commented on the NATO murder of 18 civilians in Logar Province, Afghanistan, on June 6:

Of the NATO killings, the Times writes that occupation forces, “working with their Afghan counterparts, received word that a Taliban commander was using a civilian home for the night with some of his fighters. The joint forces prepared to attack the house.”

The Times doesn’t mention that attacking a civilian home where civilians can be expected to be present is not permissible under international law simply because Taliban were also there.  Article 50 of the Protocol I additional to the Geneva Conventions states: “The presence within the civilian population of individuals who do not come within the definition of civilians does not deprive the population of its civilian character.”

So right from the get-go, the occupation forces set out to commit a war crime.

Given our commitment to protect Afghan civilians, restricting the use of air-delivered munitions against insurgents within civilian dwellings is a prudent and logical step in the progression in the campaign.

A senior Pentagon official explained the new directive to the Times (emphasis added):

When there is concern over the presence of civilians, air-delivered munitions will not be employed while other means are available.

Notice there is no recognition that deliberately bombing civilians on the grounds that there is a “presence within the civilian population of individuals who do not come within the definition of civilians” is a war crime, that “restricting” such murderous attacks is not just “prudent and logical”, but required under international law.

Nor does the Times bother to point this out to readers. Rather, it comments:

Militants often hide in civilian homes, so a complete ban on airstrikes could hinder the ability of American forces to pursue the Taliban.

That is to say, if we translate, according to the Times, international law is a hindrance for U.S./NATO forces.

Notice also that the U.S. is declaring that if it deems that “other means” are not available, it will go right on ahead bombing civilian homes with impunity.

Here is how the Times sums up what happened:

The joint Afghan-NATO raid last week was hunting a Taliban commander and some of his fighters who had holed up in a home in Logar Province where a wedding had taken place, according to local residents. An early-morning firefight broke out between the coalition troops and the insurgents, with the civilians trapped inside. The coalition decided to call in an airstrike, which killed the insurgents but also 18 civilians, including 9 children, Afghan officials said.

Notice the language used. The Taliban “holed up” in this home, as opposed to the possibility that they accepted the hospitality of the owners and stayed overnight following the wedding. A firefight just “broke out”, as opposed to NATO forces launching an attack on a civilian area and the Taliban guests taking action to defend themselves.

On Tuesday, NATO said that Allen had issued an order telling U.S. and coalition forces “that no aerial munitions be delivered against civilian dwellings.”

But the statement also contained this caveat: “As always, Afghan and coalition forces retain the inherent right to use aerial munitions in self-defense if no other options are available.”

At a Pentagon news conference on Tuesday, officials repeated the policy outlined by Allen but denied it differed greatly from Karzai’s.

“We never remove from our troops in the field the right of self-defense,” Navy Capt. John Kirby, a Defense Department spokesman, said. “We would never do that. And they still have the right to self-defense.”

So U.S./NATO forces launch a ground attack against a civilian area where militants happen to be present, in violation of protections for civilians under international law, and then call in an airstrike to bomb homes where civilians are living, also in violation of international law, killing 18, half of them children, and this is deemed justified as an act of “self-defense”. Murdering children under the claim of “self-defense”.

What could be more despicable and cowardly than that? The only thing that comes close is the media’s uncritical parroting of this condemnable self-justification.

Karzai and the coalition met last weekend to discuss airstrikes that have inadvertently killed Afghan civilians, a politically heated issue. However, the two sides offer different interpretations about what they agreed upon at the meeting.

Notice the adverb “inadvertently”. The deaths of civilians is not “inadvertent” when known civilian homes where civilians are known or likely to be present are deliberately bombed. When the U.S. launches airstrikes with the full knowledge that they are likely to kill civilians, describing the consequent deaths as “inadvertent” is similarly disgraceful cowardice, and a sorry excuse for so-called “journalism”. Civilians in this case were not killed “inadvertently”, but willfully and deliberately. This is not to say that it was the goal of U.S./NATO forces to kill civilians. It’s just to point out the fact that they quite obviously just didn’t give a shit that their actions would have this consequence. The individuals responsible for this airstrike are cowards and murderers, and should be recognized as such.

It is a rule of customary international law, established at Nuremberg, that

The murderous attack on civilian homes not only violated international law. It also violated U.S. agreements with the Karzai government. The Times states that

Mr. Karzai said that conducting airstrikes against insurgents near residential areas and homes would not only hurt the two countries’ often tense relationship, but could also jeopardize a newly signed strategic partnership agreement….

But it offers no further elucidation or context with regard to that agreement. The Washington Post doesn’t do much better:

Afghanistan’s president said Saturday that the United States failed to consult Afghan forces when it called in an airstrike that killed 18 civilians, and he warned that his government will consider such actions in the future to be in violation of the country’s pact with Washington….

Notice the statement that the Afghan government will consider future such actions to be in violation of its agreement with the U.S., when the fact is that Karzai considers this action to have been so. Further on, one may read:

The United States and Afghanistan signed an agreement in April that put the Afghan government in charge of most such “special operations,” a move designed to resolve some of the long-standing tensions.

That’s as far as the Post goes to explain. The AP reports:

Afghan President Hamid Karzai declared on Tuesday that NATO aircraft can no longer fire on homes under any circumstances, an indication that the conflict over NATO airstrikes that kill civilians — including one that left 18 dead last week — remains unresolved….

“An agreement has been reached clearly with NATO that no bombardment of civilian homes for any reason is allowed,” Karzai said defiantly at a news conference at the presidential palace in Kabul.

… Karzai said that at a meeting after the incident in Logar province, he asked U.S. Marine Gen. John Allen, the top commander of U.S. and NATO forces in Afghanistan: “Do you do this in the United States? There is police action every day in the United States. … They don’t call in airplanes to bomb the place.”

Notice the disparity between what the Post reported and what Karzai actually said. The AP states:

Airstrikes on homes are a small part of international military operations in Afghanistan, yet they have brewed intense resentment among Afghans, who feel they employ a disproportionate use of force and put civilians at risk in their own homes.

Afghans are, of course, absolutely correct to point out that under international law, bombing civilian homes where civilians are present simply because combatants are present there is a disproportionate use of force. But the AP doesn’t bother to point that out to readers. The article states:

The international force operates under a U.N. mandate, and while Afghan forces partner with coalition troops on night raids, coalition commanders are the ones who authorize airstrikes.

Let’s look at what the U.S.-Afghanistan agreement actually says about that. Last month, President Obama and President Karzai signed the “Enduring Strategic Partnership Agreement Between the United States of America and the Islamic Republic of Afghanistan”. This agreement states:

The conduct of ongoing military operations shall continue under existing frameworks, which include … the Memorandum of Understanding of the Afghanization of Special Operations (2012)….

The United States emphasizes its full respect for the sovereignty and independence of Afghanistan.

The “Memorandum of Understanding between The Islamic Republic of Afghanistan and the United States of America On Afghanization of Special Operations on Afghan Soil” states:

1. For the purpose of this Memorandum of Understanding (MoU), special operations are operations approved by the Afghan Operational Coordination Group (OCG) and conducted by Afghan Forces with support from U.S. Forces in accordance with Afghan laws.

2. The Khasa Amalyati Qeta/Qeta-e-Khas-e-Amalyati, or Afghan Special Operations Unite, hereinafter referred to as the KAQ/QKA, is comprised of Afghan National Army, Afghan National Police, and National Directorate of Security personnel. The KAQ/QKA leads special operations with support from U.S. Forces to provide security and stability in Afghanistan….

c. the KAQ/QKA can enter private compounds, residential houses, and other areas for the purposes of search and arrest, in accordance with Afghan laws, with support from U.S. Forces only as required or requested; and

d. Afghan Forces are to protect any women, children, or culturally sensitive places.

It is perfectly clear that U.S./NATO forces violated this agreement, and that the U.S.’s insistence that it will continue such attacks without regard for the objections of the Karzai government violates its obligation to respect Afghanistan’s sovereignty.

Unfortunately, the media act as though they were running damage-control PR for the Pentagon.