Americans Can Be Proud of the U.S.’s Historical Support for Mideast Dictators

Supporting dictators has been a good thing because it secured U.S. access to oil. 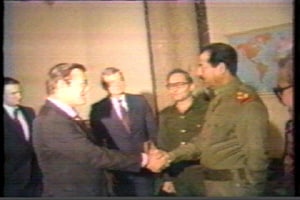 Why do I punish myself by reading STRATFOR?

Any article that purports to explain Russia and China’s veto of the resolution on Syria that doesn’t contain the word “Libya” isn’t worth the paper it’s printed on (or not printed on if you read all your news online like me).

On Wednesday, I read George Friedman’s “Consequences of the Fall of the Syrian Regime”. Actually, I didn’t punish myself by reading the whole thing, but ended skimming through most of it (I “speed-read” articles if I don’t’ feel like really absorbing them and just want to get an idea of what they’re saying). Here’s an excerpt:

The Russians opposed the West’s calls to intervene, which were grounded on human rights concerns, fearing that the proposed intervention was simply a subterfuge to extend Western power and that it would be used against them.

I quoted that part and commented again on Facebook:

This is why it is hard to take STRATFOR seriously. Gosh, “the West” (read “Washington and its lackeys”) are just so concerned about the welfare of Syrians, and they would *never* intervene in a country to extend Western power! And if you think “the West” has anything other than humanitarian motives in mind, you are just a silly person, or an Assad supporter, or something.

And then, after referring people to my July 20 comment, I added:

Hit Ctrl+F and do a search in this STRATFOR piece for “Libya” and see what you find.

So just now, I read (yes, actually read, not skimmed this time), Robert D. Kaplan’s “Good Mideast Dictators”. Why did I do that to myself? I just can’t help it. It’s like how I feel compelled to read Thomas L. Friedman’s sociopathic columns or Paul Krugman’s Keynesian drivel. And now I want you to experience that pain, too. Bwahahaha! So here we go. Kaplan writes:

It is often said that the Arab Spring proves American support for Middle Eastern autocrats for more than half a century was wrong because the policy did not bring peace or stability. Nonsense. For any policy to remain relevant for so many decades in this tumultuous world is itself a sign of success. Support for moderate Arab monarchs and secular dictatorships was part of a successful Cold War strategy for which there is no need to apologize. It helped secure the sea lines of communication between the oil-rich Middle East and the West, on which the well being of Americans depended. What was the United States supposed to have done? Overthrow a slew of regimes across a vast swath of the earth for decades on end because those states did not conform with America’s own historical experience and political system? Or should we not have had diplomatic relations with these regimes in the first place? No responsible American statesman would choose either of those options. What were Henry Kissinger, Zbigniew Brzezinski and James Baker supposed to have done? Not seek Arab-Israeli troop disengagement accords and peace agreements because their Arab interlocutors were not democratically elected?

Okay, there’s a lot there. Let’s break this down. First, notice the initial strawman Kaplan sets up for himself. It is “often said” (by whom?) that the U.S.’s historic support for Middle East dictators is wrong because it “did not bring peace or stability”. First of all “stability” is the standard euphemism meaning a situation in which the political situation in a country or region is “stable” in the sense that Washington knows what is happening there and is able to exercise influence to further U.S. “interests” as narrowly defined by policymakers. So this begs the question of who has ever, for example, argued that the U.S.’s support for, say, Saddam Hussein, did not bring “stability” in this sense of the word? Or Hosni Mubarak? Or the Saud regime? Etc. We may stipulate that this policy was successful in maintaining the status quo of “stability”.

Notice no real objection to supporting dictators—i.e., the fact that it is immoral because they are dictators—is raised by Kaplan. He doesn’t trouble himself to argue why supporting tyrants who brutalize their own people, ruling through fear, death, and torture, isn’t wrong. Or why a policy contrary to the democratic principles we feign to hold so dear (but which obviously aren’t really that important to us when it comes to foreign policy, as Kaplan illustrates perfectly) isn’t hypocritical. Etc.

Next examine his logic that if any policy has been around for a long time, it must therefore be defined as a “success”. Oh, so the U.S. so-called “war on drugs” is obviously an enormous success, then. Policies in the Middle East like supporting Israeli oppression of the Palestinians and punishing other Arab populations, as in Iraq, where years of sanctions killed half a million children (which was “worth it”, according to Secretary of State Madeleine Albright), which policies result in what is known in intelligence circles as “blowback”—you know, like 9/11—are obviously incredibly successful.

Then take his next arguments. Supporting dictators has been a good thing because it secured U.S. access to oil. So, dear American readers, you don’t need to feel bad at all about your government supporting oppression, torture, and murder, because it all meant in the end that you could afford to fill up that SUV of yours. And there is no need to apologize for wanting to drive an SUV!

Kaplan next asks what else the U.S. was supposed to do, a though it really didn’t have any choice in the matter but to support tyranny. He presents the options as being: 1) Support dictators, 2) Overthrow dictators, 3) Have no diplomatic relations with dictatorships. So choose your poison.

He sums it up:

A basic rule of foreign policy pragmatism is that you must work with the material at hand: because it is dangerous and costly to replace regimes thousands of miles away from home when they do not correspond to your values or liking.

The possibility that the U.S. government could choose neither to support dictators (e.g. Iraq) nor to intervene in other countries’ affairs to overthrow foreign governments (e.g. Iraq) nor to refuse to have diplomatic relations with other nations (e.g. Iraq) just completely escapes Kaplan. He just can’t even imagine a world in which the U.S. isn’t either supporting autocratic regimes or overthrowing them. It’s completely beyond his comprehension.

Oh, wait… I nearly forgot. Such a non-interventionist foreign policy might mean that it would be quite a bit more expensive to fill up that SUV, so obviously that option is right out. Why, that’s clearly no option at all. Silly me.

The one example Kaplan refers to specifically is the Camp David peace agreement the U.S. brokered between Israel and Egypt, in which Egypt agreed in exchange for Israeli withdrawal from the Sinai to remove itself from the Palestinian struggle against Israeli occupation and theft of their land (such that Egypt was complicit in Israel’s siege of Gaza to collectively punish the civilian population, etc.) and in return for $1.3 billion annually to prop up the ruling Egyptian military establishment, courtesy of the U.S. taxpayers. (And this arrangement has obviously been a resounding “success”, since it has lasted for so long. Just don’t remind the Egyptian people what a “success” it has been. It’s a sensitive issue over there, particularly of late.)

I’ll spare you most of the rest. It’s yada yada yada, and he comes to how “democracy” is not a cure all. After all, Adolf Hitler was democratically elected, remember? We may stipulate his point here, and skip right to his conclusion:

The basic truth about the Arab Spring is that it has brought us not only more freedom but also more complexity. Rather than one man, one telephone number and one email address to deal with in case of international crises involving this country or that, Washington now has to take into account the sentiments of dozens of people in the political power structure of a given Arab capital…. More complexity means that it is not entirely clear that the political changes in the Middle East since early 2011 are necessarily in the interest of the United States.

So the bottom line is that it is just so much easier and more efficient dealing with tyrants than having to work with democratic governments that actually feel obligated to obtain authority and consent from their people for what they do, and it is just not necessarily in the “interest” of the U.S. to decline to support the brutal oppression of their own people by certain regimes. Because, you know, Americans like to drive SUVs and all that. Let’s not go bringing issues like morality into it.