Did you hear the one about the newspaper that published a map of gun owners?

Did you hear the one about the newspaper that published a map of registered gun owners in an attempt to make an anti-gun-ownership statement? So the Journal News ran a story all about how people should know who in their neighborhoods owns a weapon and published the aforementioned map, which it created using Google maps by using […]

Did you hear the one about the newspaper that published a map of registered gun owners in an attempt to make an anti-gun-ownership statement?

So the Journal News ran a story all about how people should know who in their neighborhoods owns a weapon and published the aforementioned map, which it created using Google maps by using the Freedom of Information Act (FOIA) to obtain records of registered gun owners in Westchester and Rockland counties, New York. The map, under the heading “Where are the gun permits in your neighborhood?”, show the names and addresses of individuals who legally own one or more pistols in their households. 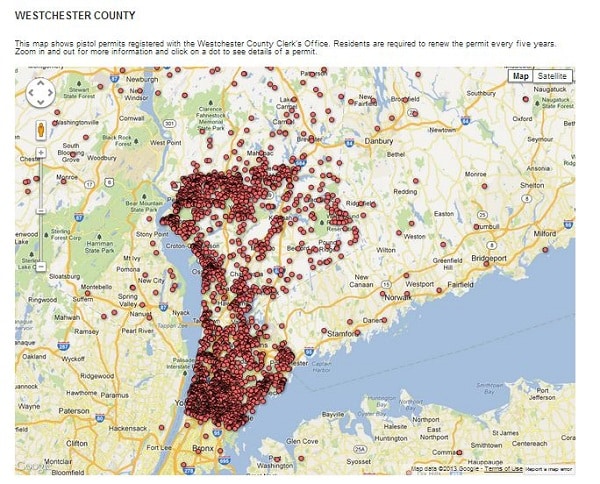 The Journal News didn’t compile maps of criminals who own guns illegally, so somebody took the liberty of putting this together: 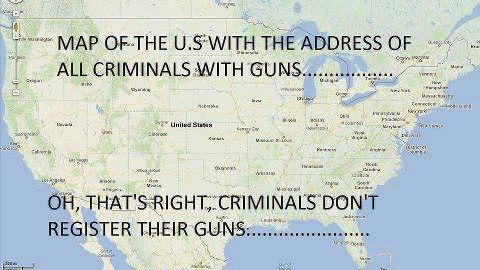 Blogger Christopher Fountain gave the senior staff at the Journal News a taste of their own medicine by posting their addresses, phone numbers, and other information, such as about the publisher, Janet Hasson: 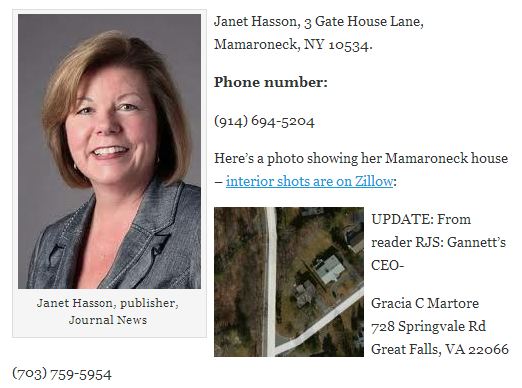 And Robert Cox put together a map of his own in a post appropriately borrowing from the Journal News’s map title: “Where are the Journal News employees in your neighborhood?” 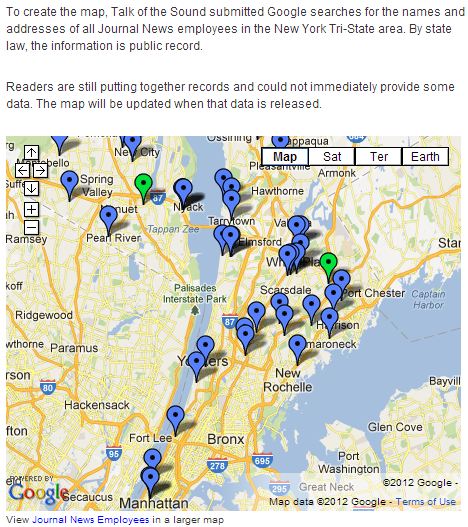 Law enforcement officials are none too happy about the Journal News‘s little stunt, either. As Newsday reported:

Criticism of The Journal News, which published a gun permit database last month, broadened Friday with Rockland law enforcement officials saying the map listing the names and addresses of those with gun permits is endangering lives.

Inmates at the Rockland County jail are taunting corrections officers by saying they know the guards’ home addresses — information they got from the list published by Westchester-based newspaper, Rockland County Sheriff Louis Falco said….

And the Journal News’s action seems to be having the unintended consequences of encouraging more people to obtain a firearm.

Legis. Aron Wieder (D-Spring Valley) called the publication of the list “irresponsible journalism” and said he now fears for his safety because the map broadcast that he does not have a gun license. At the news conference Friday morning, he handed a $150 certified check and a completed pistol permit application to Rockland County Clerk Paul Piperato.

“I never owned a gun but now I have no choice,” Wieder said. “I have been exposed as someone that has no gun. And I’ll do anything, anything to protect my family.”

Not only law enforcement officials and politicians feel endangered by the Journal News’s reckless disclosure, but ordinary citizens as well, such as Charlotte Swift:

Orangetown resident Charlotte Swift, 55, handed out lists of the newspaper’s employees linked to the article, with their home addresses and phone numbers, as well as local politicians who can have an influence on the bill in Albany.

Swift said she has owned a gun for more than 20 years and her name is on the published list.

“When I saw the list, I had an immediate flood of emotions that I cannot even describe to you,” said Swift. “I originally obtained a gun permit because I had previously been married to a man who attempted to strangle me . . . The first emotion I felt was, ‘Oh my gosh, he can find me.'”

She also feared burglars might break into her own home and those of her neighbors who do not have guns.

Fox News took the trouble of tracking down some ex-cons to get their opinion of the Journal News’s actions. A sampling:

“That was the most asinine article I’ve ever seen,” said Walter T. Shaw, 65, a former burglar and jewel thief who the FBI blames for more than 3,000 break-ins that netted some $70 million in the 1960s and 1970s. “Having a list of who has a gun is like gold – why rob that house when you can hit the one next door, where there are no guns?

“What they did was insanity,” added Shaw, author of “License to Steal,” a book about his criminal career.

“They just created an opportunity for some crimes to be committed and I think it’s exceptionally stupid,” said Bob Portenier, 65, a former burglar and armed house robber turned crime prevention consultant.

Frank Abagnale, who was portrayed by Leonardo DiCaprio in the 2002 film “Catch Me if You Can,” and is perhaps the most famous reformed thief to ever earn a legitimate living by offering the public insight into the criminal mind, called the newspaper’s actions “reprehensible.”

“It is unbelievable that a newspaper or so called journalist would publish the names and addresses of legal gun owners, including federal agents, law enforcement officers and the like,” said Abagnale, who noted that he grew up in the suburban New York area served by the Journal-News. “This would be equivalent to publishing the names of individuals who keep substantial sums of money, jewelry and valuables in their home.”

People like the fine folks at the Journal News responsible for publishing this map of registered gun owners would prefer that people not have a firearm in their household. They would prefer that parents be incapable of protecting their children from home intruders, such as a mother in Georgia recently did. The mother hid with her 9-year-old twins in a closet as the intruder rummaged through their house, but when he came into the room they were in and opened the closet, he was met with six shots from her .38 revolver. The mother fired until her gun was empty, but the intruder was still not incapacitated. He got back up, but, fortunately, he — probably being unaware that she had no more bullets remaining in her weapon — decided to take the opportunity to leave the house rather than attempting to assault the woman and her children.

Here’s an excellent segment about the incident on Fox News’s America Now with Megyn Kelly:

Now for the punchline. So how did the Journal News respond to the public anger over their irresponsible anti-gun statement? They hired armed guards at two of their offices, as Ms. Hasson put it, for “the safety of my staff”.