Krugman on Deficit Spending and the Bond Bubble

This isn't going to look good on Krugman's record when it's through playing out...

Paul Krugman blogs at the NYT about the “Dwindling Deficit” in the U.S.:

Bad news for Dr. Evil fans: the days of a ONE TRILLION DOLLAR deficit are over. In fact, the deficit is falling fast…. This is not good news — or not unambiguously good news, at any rate. A deficit falling to probably less than 5 percent of GDP this year and well below that next year is MUCH TOO LOW for an economy whose private sector is still engaged in a vicious circle of deleveraging.

So, according to Krugman, the deficit is “falling fast”, which is “not good news” because the government is supposed to be saving the economy by spending, spending, spending right now. His link refers readers to a CBO report that states:

The federal government ran a budget deficit of $489 billion in the first seven months of fiscal year 2013 (that is, from October 2012 through April 2013), according to CBO’s estimates. That amount is $231 billion less than the shortfall recorded during the same period last year, primarily because revenue collections have been much greater than they were at this point in 2012. In contrast, federal spending so far this year has been slightly lower than what it was last year at this time.

So when Krugman refers to a “dwindling” deficit, what he means is that the government’s deficit from October ’12 – April ’13 was smaller than it was from October ’11 – April ’12. Furthermore, this is due not primarily due to any spending cuts, but due to increased revenues from taxes. The CBO also notes that an updated The Budget and Economic Outlook: Fiscal Years 2013 to 2023 is due out soon. In the meantime, here is what the CBO had to say in its February report (bold emphasis added):

In CBO’s baseline projections, deficits continue to shrink over the next few years, falling to 2.4 percent of GDP by 2015. Deficits are projected to increase later in the coming decade, however, because of the pressures of an aging population, rising health care costs, an expansion of federal subsidies for health insurance, and growing interest payments on federal debt. As a result, federal debt held by the public is projected to remain historically high relative to the size of the economy for the next decade. By 2023, if current laws remain in place, debt will equal 77 percent of GDP and be on an upward path…. 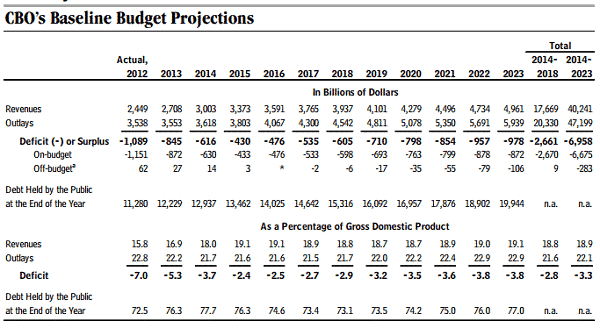 Here’s where it gets fun, though. In his recent column denying that there is a bond bubble, Krugman reasoned (emphasis added):

[I]t’s hard to see why the Fed should raise rates until unemployment falls a lot and/or inflation surges, and there’s no hint in the data that anything like that is going to happen for years to come.

Which could just as well be another way of saying that the data show something like that is going to happen in the years to come. So what does Krugman’s own source, the Congressional Budget Office, have to say about that? Returning again to its budget projection:

Such high and rising debt would have serious negative consequences: When interest rates rose to more normal levels, federal spending on interest payments would increase substantially. Moreover, because federal borrowing reduces national saving, the capital stock would be smaller and total wages would be lower than they would be if the debt was reduced. In addition, lawmakers would have less flexibility than they might ordinarily to use tax and spending policies to respond to unexpected challenges. Finally, such a large debt would increase the risk of a fiscal crisis, during which investors would lose so much confidence in the government’s ability to manage its budget that the government would be unable to borrow at affordable rates.

Doh! This isn’t going to look good on Krugman’s record when it’s through playing out…