A reenactment of the Burgas bus bombing (AP)

Does the government of Bulgaria really think that a “reasonable assumption” is a good basis upon which the E.U. should decide to label groups as terrorist organizations? 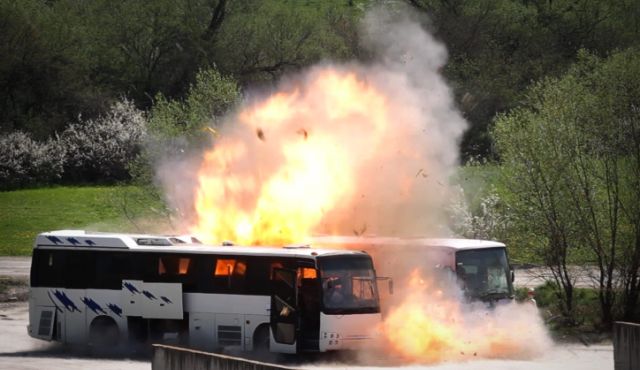 A reenactment of the Burgas bus bombing (AP)

The European Union decided last month to label the military wing of Hezbollah a “terrorist” organization for its alleged role in the bus bombing in Burgas, Bulgaria in July 2012. As the Israeli daily Haaretz reported it:

The Burgas probe, in which the United States, Britain, Germany, Canada and Australia also participated, convinced the Bulgarian government to announce in February 2013 that Hezbollah’s military wing was behind the attack.

The problem is that this is false. The Bulgarian government did not definitively announce that Hezbollah was behind the attack. Following that link brings you to another article in which Haaretz reported:

Bulgaria’s interior minister says new evidence has bolstered its case implicating Hezbollah in a deadly July 2012 bus bombing, but investigators still do not know the specific identities of the suspects.

Tsvetlin Yovchev would not give further details Wednesday, saying the investigation was ongoing.

As for Bulgaria, it is clear that its announcement is purely political, an obvious attempt to placate the demands of Washington and Tel Aviv. Bulgarian Minister of Interior Tsvetlin Yovchev issued a statement saying that

The decision of the European Union Foreign Affairs Council to place the armed wing of the Lebanese movement Hezbollah on the EU terrorist blacklist is a good one.

And yet at the same time, the Ministry of Interior issued a statement noting that (emphasis added):

The available evidence suggests that “Hezbollah” stood behind the attack, but more time is needed to confirm more specifically any hard evidence from a procedural point of view.

The title of that statement was:

So what is the position on the responsibility for the Burgas bombing from which Bulgaria hasn’t changed? Here is what then Minister of Interior Tsvetan Tsvetanov said in a statement in February about the bombers (see my previous posts on the subject here and here):

Does the government of Bulgaria really think that a “reasonable assumption” is a good basis upon which the E.U. should decide to label groups as terrorist organizations? Shouldn’t conclusive evidence, or at least evidence beyond a reasonable doubt, before such a decision is made? The fact such evidence wasn’t required in this case shows unambiguously how this was purely a political move.

Neither Bulgaria nor the rest of the E.U. wishes to defy orders from Washington in this case. Besides, the E.U. had to kiss a little ass to make up for its decision, no doubt prompted by fears that Palestine might seek to hold the E.U. accountable for complicity in Israel’s illegal settlement policy, to establish new guidelines requiring any Israeli entity seeking funding or cooperation from the E.U. to submit a declaration that it has no links to the occupied territories.