Causing ‘Harm’ to the Government By Exposing Its War Crimes

Manning was found "guilty" of was having a moral conscience and the courage to act upon it, thus having "sown mistrust and damaged" the U.S. by exposing its war crimes. 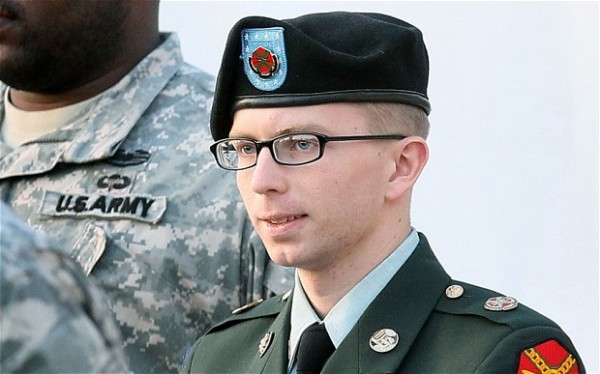 In Sentencing, U.S. Tries to Prove Harm by Manning

FORT MEADE, Md. — As the sentencing phase began Wednesday in the court-martial of Pfc. Bradley Manning, the government tried to demonstrate how his disclosure of hundreds of thousands of military and diplomatic documents to WikiLeaks had sown mistrust and damaged the United States.

No elaboration on how the leaks “had sown mistrust and damaged the United States.” Elsewhere, the Times reported:

While advocates of open government celebrated his acquittal on the most serious charge [of “aiding the enemy”], the case still appears destined to stand as a fierce warning to any government employee who is tempted to make public vast numbers of secret documents. Private Manning’s actions lifted a veil on American military and diplomatic activities around the world….

Still no elaboration, apart from this tiny little hint:

Colonel Lind accepted Private Manning’s guilty pleas on two lesser counts, one of which involved leaking a video of an American helicopter attack in Baghdad.

No mention of the fact that that video showed a U.S. Apache helicopter massacring of unarmed civilians. From Wikileaks:

On July 6, 2010, Private Bradley Manning, a 22 year old intelligence analyst with the United States Army in Baghdad, was charged with disclosing this video (after allegedly speaking to an unfaithful journalist). The whistleblower behind the Pentagon Papers, Daniel Ellsberg, has called Mr. Manning a ‘hero’. He is currently imprisoned in Kuwait. The Apache crew and those behind the cover up depicted in the video have yet to be charged. To assist Private Manning, please see bradleymanning.org.

5th April 2010 10:44 EST WikiLeaks has released a classified US military video depicting the indiscriminate slaying of over a dozen people in the Iraqi suburb of New Baghdad — including two Reuters news staff.

Reuters has been trying to obtain the video through the Freedom of Information Act, without success since the time of the attack. The video, shot from an Apache helicopter gun-sight, clearly shows the unprovoked slaying of a wounded Reuters employee and his rescuers. Two young children involved in the rescue were also seriously wounded.

Here is the short version:

Also no mention of the fact that under the Uniform Code of Military Justice, Private Manning had a duty to report war crimes to his superiors and a duty to disobey orders to conceal evidence of war crimes by U.S. forces. As Marjorie Cohn explains:

So, you see, what Manning was found “guilty” of was having a moral conscience and the courage to act upon it, thus having “sown mistrust and damaged” the U.S. by exposing its war crimes.

The Times, of course, saw fit to omit that latter little detail, also deemed irrelevant by the military court that proclaimed judgement upon him.

I make my work freely available, but it needless to say costs me time and expenses. If you appreciate what I do, drop me a tip to help me pay for my subscription to the Times. Here’s why.