We're supposed to believe that Iran is trying to pursue a nuclear weapon by using plutonium from its Arak reactor and that it is concealing this activity from the IAEA through its non-cooperation. 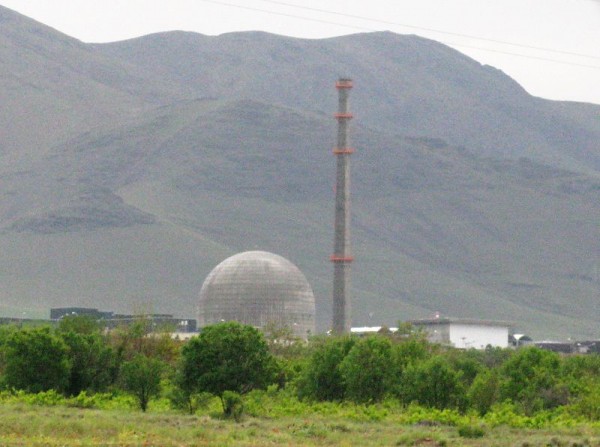 Under the headline “Iran’s Plan B for the Bomb”, Amos Yadlin (former chief of Israeli military intelligence director of Israel’s Institute for National Security Studies) and Avner Golov (a researcher at the Institute) in a New York Times op-ed echo the claim from Israeli Prime Minister Benjamin Netanyahu that

Iran also appears to be pursuing a parallel track to a nuclear capability through the production of plutonium.

In May, Iran announced that the heavy-water reactor in Arak would become operational early next year. Some American and European officials claim that Iran could produce weapons-grade plutonium next summer…. A functioning nuclear reactor in Arak could eventually allow Iran to produce sufficient quantities of plutonium for nuclear bombs. Although Iran would need to build a reprocessing facility to separate the plutonium from the uranium in order to produce a bomb, that should not be the West’s primary concern. Western negotiators should instead demand that Iran shut down the Arak reactor.

In other words, the West should demand that Iran surrender its rights under the nuclear non-proliferation treaty (NPT) to a civilian nuclear program. As I wrote with regard to Netanyahu making this same claim on CBS Face the Nation last month:

All this talk about an “alternative route” through plutonium is just more hypothetical nonsense. The reference is to Iran’s Arak heavy water reactor, which “when operational, could produce plutonium if the spent uranium fuel was reprocessed”, as the Guardian reported in May. It added that “plutonium can be used to make smaller, even more powerful nuclear warheads than weapons-grade uranium. To make it, however, Iran would need to build a reprocessing plant and there is so far no sign of that” (emphasis added).

Of course, there’s no sign that Iran is doing any of this. But you would never know that watching CBS or reading America’s “newspaper of record”.

The link Yadlin and Golov provide is to a Wall Street Journal article, which states:

Iran started building the Arak facility in 2004 based on designs provided by Russia, according to former U.N. officials. Two years later, the U.N. Security Council passed a resolution requiring Tehran to cease construction because of the IAEA’s concerns Iran might have a covert nuclear-weapons program.

Tehran has refused to comply, one of the reasons the U.N. has enacted four rounds of sanctions on Iran. It has also significantly restricted the IAEA’s ability to inspect the reactor and its development plans, according to U.N. officials.

…The IAEA also says that it has no indications yet that Tehran has built a reprocessing facility at Arak, which would be needed to harvest the plutonium from the reactor’s spent fuel.

The WSJ at least acknowledges that there is no evidence of the reprocessing facility that would be required if Iran actually wanted to try to use plutonium to build a bomb, but otherwise this is pure propaganda. The WSJ is referring to U.N. Security Council resolution 1737 from December 27, 2006. The first operative paragraph of that resolution stated:

Affirms that Iran shall without further delay take the steps required by the IAEA Board of Governors in its resolution GOV/2006/14, which are essential to build confidence in the exclusively peaceful purpose of its nuclear programme and to resolve outstanding questions;

2. Decides, in this context, that Iran shall without further delay suspend the following proliferation sensitive nuclear activities:

(a) all enrichment-related and reprocessing activities, including research and development, to be verified by the IAEA; and

(b) work on all heavy water-related projects, including the construction of a research reactor moderated by heavy water, also to be verified by the IAEA;

Underlines that outstanding questions can best be resolved and confidence built in the exclusively peaceful nature of Iran’s programme by Iran responding positively to the calls for confidence building measures which the Board has made on Iran, and in this context deems it necessary for Iran to:

• re-establish full and sustained suspension of all enrichment-related and reprocessing activities, including research and development, to be verified by the Agency;

• reconsider the construction of a research reactor moderated by heavy water;

• ratify promptly and implement in full the Additional Protocol;

What the IAEA is calling for here, Iran has no legal obligation to comply with. There is nothing under the NPT requiring Iran to take “confidence building measures” that prejudice its right to research and develop nuclear energy for peaceful purposes. In fact, the NPT explicitly prohibits the IAEA from prejudicing Iran’s “inalienable” right to do so. And the IAEA only called on Iran to “reconsider” construction of its Arak reactor. The U.N. Security Council then, acting ultra vires, pretended to turn that into a legal requirement. The U.N. Security Council has no authority to pass the sanctions resolutions it has passed against Iran.

As for the WSJ’s suggestion that Iran is somehow being uncooperative with the IAEA in allowing it to inspect the Arak reactor, the truth is that Iran is fully complying with its legal obligations under its safeguards agreement with the IAEA under the NPT regime. The WSJ is referring to the IAEA’s criticism of Iran that is has not provided it with certain access under Code 3.1, an additional protocol to its safeguards agreement that it never ratified. As former U.N. weapons inspector Scott Ritter has explained:

The “rules” Iran is accused of breaking are not vague, but rather spelled out in clear terms. In accordance with Article 42 of Iran’s Safeguards Agreement, and Code 3.1 of the General Part of the Subsidiary Arrangements (also known as the “additional protocol”) to that agreement, Iran is obliged to inform the IAEA of any decision to construct a facility which would house operational centrifuges, and to provide preliminary design information about that facility, even if nuclear material had not been introduced. This would initiate a process of complementary access and design verification inspections by the IAEA.

This agreement was signed by Iran in December 2004. However, since the “additional protocol” has not been ratified by the Iranian parliament, and as such is not legally binding, Iran had viewed its implementation as being voluntary, and as such agreed to comply with these new measures as a confidence building measure more so than a mandated obligation.

In March 2007, Iran suspended the implementation of the modified text of Code 3.1 of the Subsidiary Arrangements General Part concerning the early provisions of design information. As such, Iran was reverting back to its legally-binding requirements of the original safeguards agreement, which did not require early declaration of nuclear-capable facilities prior to the introduction of nuclear material.

In sum, we’re supposed to believe that Iran is trying to pursue a nuclear weapon by using plutonium from its Arak reactor and that it is concealing this activity from the IAEA through its non-cooperation, when the truth is there is no evidence Iran has a nuclear weapons program and is complying with its legal obligations under the NPT.