Krugman vs. Krugman on the Cause of the Housing Bubble

Well, let's see what a very well known, Nobel-Prize winning economist had to say about the effect of "easy money" in the housing market during the bubble years

Here, however, is a side question: why have we been having so many bubbles?

The answer you hear from a lot of people is that it’s all caused by excessively easy money.

He goes on to argue that this isn’t so:

But let’s think about the longer-term history for a bit. Here’s long-term U.S. interest rates since the early 1950s: 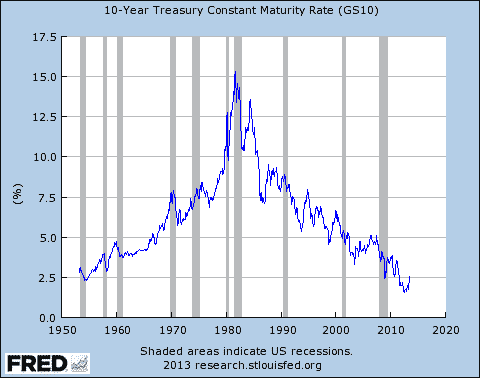 As you can see, there was a period of very high rates in the inflationary 70s and early 80s. Rates fell after the Volcker stabilization, but they stayed relatively high by 50s/60s standards through the late 80s, the 90s, and even for much of the naughties.

Now, the thing you need to realize is that the whole era since around 1985 has been one of successive bubbles. There was a huge commercial real estate bubble (pdf) in the 80s, closely tied up with the S&L crisis; a bubble in capital flows to Asia in the mid 90s; the dotcom bubble; the housing bubble; and now, it seems, the BRIC bubble. There was nothing comparable in the 50s and 60s.

So, was monetary policy excessively easy through this whole period? If so, where’s the inflation?

Now, when I read that, I smiled, since a bubble is price inflation (which is what he means by ‘inflation’, as opposed to monetary inflation, which causes of price inflation). Where’s the inflation? Here it is.

Then I came to his next sentence:

Maybe you can argue that loose money, for a while, shows up in asset prices rather than goods prices (although I’ve never seen that argument made well).

LOL! He’s “never seen that argument made well”? Well, let’s see what a very well known, Nobel-Prize winning economist had to say about the effect of “easy money” in the housing market during the bubble years:

“Millions of Americans have decided that low interest rates offer a good opportunity to refinance their homes or buy new ones.” — May 2, 2001

“To reflate the economy, the Fed doesn’t have to restore business investment; any kind of increase in demand will do…. [H]ousing, which is highly sensitive to interest rates, could help lead a recovery.” – August 14, 2001

“Low interest rates, which promote spending on housing and other durable goods, are the main answer.” – October 7, 2001

“The good news about the U.S. economy is that it fell into recession, but it didn’t fall off a cliff…. [T]he Fed’s dramatic interest rate cuts helped keep housing strong” – December 28, 2001

“To fight this recession the Fed … needs soaring household spending to offset moribund business investment. And to do that … Alan Greenspan needs to create a housing bubble to replace the NASDAQ bubble.” – August 2, 2002

“[T]hose 11 interest rate cuts in 2001 fueled a boom both in housing purchases and in mortgage refinancing, both of which helped keep the economy from experiencing a much more severe recession.” – October 1, 2002

“Mortgage rates did indeed fall briefly to historic lows, extending the home-buying and refinancing boom that has helped keep the economy’s head above water.” – July 25, 2003

“U.S. interest rates low despite the enormous government borrowing required to cover the budget deficit. Low interest rates, in turn, have been crucial to America’s housing boom.” – May 20, 2005

“Now the question is what can replace the housing bubble…. But the Fed does seem to be running out of bubbles.” – May 27, 2005

“[T]he Federal Reserve successfully replaced the technology bubble with a housing bubble. But where will the Fed find another bubble?” – August 7, 2006

“Back in 2002 and 2003, low interest rates made buying a house look like a very good deal. As people piled into housing, however, prices rose—and people began assuming that they would keep on rising.” – July 27, 2007

Hmm… Seems Paul Krugman is having a disagreement with this other economist. So, since Krugman denies that the Fed’s inflationary monetary policy had anything to do with it, what is his answer to the mystery of what caused the housing bubble?

Oh, I see. And who was that other economist who repeatedly praised how the Fed’s low-interest rate policy had created a housing bubble?

Why, none other than … Paul Krugman! Here’s a brief review of his record on the housing bubble. For fuller documentation of his abysmal record and intellectual bankruptcy, check out my book, Ron Paul vs. Paul Krugman: Austrian vs. Keynesian economics in the financial crisis. 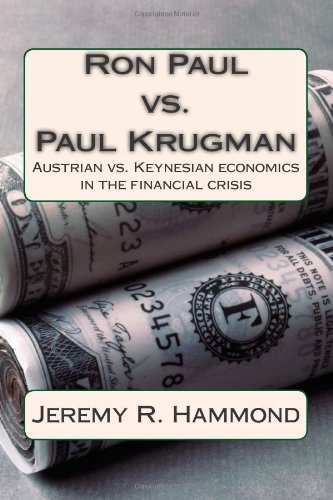