In his latest column, Krugman asks, “Why have we been having so many bubbles?” His answer is instructive.

Paul Krugman is an influential Nobel Prize-winning economist with a prominent voice in the media as a columnist and blogger for the New York Times who constantly uses his platform to argue for more government intervention in the market. In his latest column, Krugman asks, “Why have we been having so many bubbles?” His answer is instructive.

Krugman notes that the U.S. had a dot-com bubble followed by a housing bubble and that “One popular answer” to his question “involves blaming the Federal Reserve—the loose-money policies of Ben Bernanke and, before him, Alan Greenspan.” While “it’s certainly true”, Krugman writes, “that for the past few years the Fed has tried hard to push down interest rates, both through conventional policies and through unconventional measures like buying long-term bonds”, and while the “resulting low rates certainly helped send investors looking for other places to put their money, including emerging markets”, “the Fed was only doing its job. It’s supposed to push interest rates down when the economy is depressed and inflation is low.”

Of course, this isn’t actually an argument. That the Fed may have been “only doing its job” doesn’t mean that its inflationary monetary policies weren’t the cause of the dot-com and housing bubbles. But Krugman continues, “I know that there are some people who believe that the Fed has been keeping interest rates too low, and printing too much money, all along. But interest rates in the ‘80s and ‘90s were actually high by historical standards, and even during the housing bubble they were within historical norms.”

“Besides,” Krugman adds, “isn’t the sign of excessive money printing supposed to be rising inflation? We’ve had a whole generation of successive bubbles—and inflation is lower than it was at the beginning.”

Having thus dismissed the Fed’s monetary policy as the cause of the bubbles, Krugman diverts his readers’ attention elsewhere, writing that “the other obvious culprit is financial deregulation”. The “main lesson of this age of bubbles”, Krugman concludes, “is that when the financial industry is set loose to do its thing, it lurches from crisis to crisis.”

Krugman’s argument, however, simply is not honest. His claim that interest rates were “within historic norms” during the housing bubble, for example, is what one might call a “lie”.

If one follows his link, it goes to his blog, where he shows a chart of interest rates on 10-year Treasury securities. However, Krugman is perfectly well aware that the main mechanism by which the Fed lowered interest rates before the bursting of the housing bubble was through purchases of short-term Treasury securities (he had, after all, himself just pointed out that only in the “past few years” had the Fed taken “unconventional measures like buying long-term bonds”). It wasn’t until after the bubble burst, in 2008, that the Fed began what it calls “Large Scale Asset Purchases” (LSAPs). Under the several rounds of “quantitative easing” (QE) that have occurred since the financial crisis struck, the Fed has monetized long-term Treasury securities and mortgage-backed securities (i.e., created “money” out of thin air to buy government debt or other debt instruments).

But even looking at 10-year securities, it seems rather disingenuous, to say the least, to describe the 3.4% low that was reached in 2003 as “within historic norms” when it hadn’t been that low since 1958. 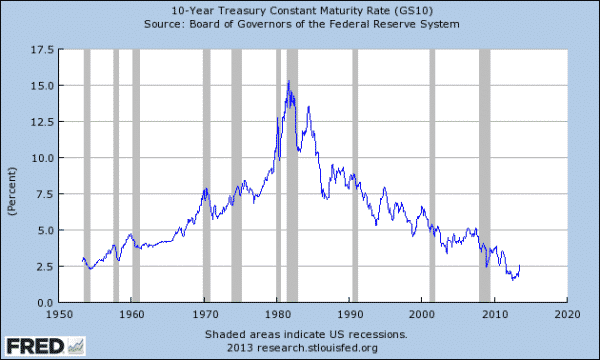 Turning to interest rates on 1-year and 5-year securities, the truth is that they did reach historic lows during the bubble years, and the federal funds rate, which is the rate at which banks lend to each other and which is influenced by the Fed’s purchases of securities, reached a historic low of 1% during the housing bubble, which in turn influenced the interest on adjustable-rate mortgages. 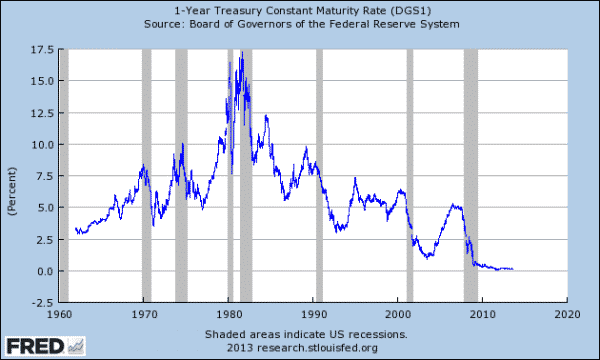 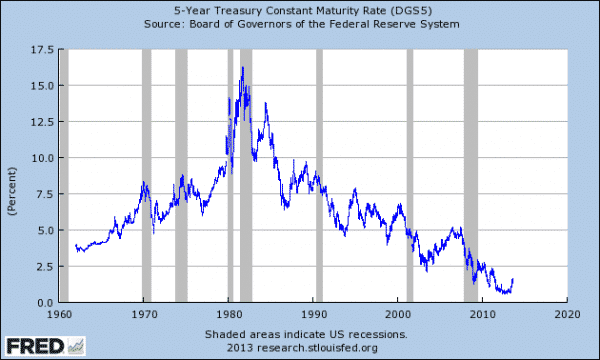 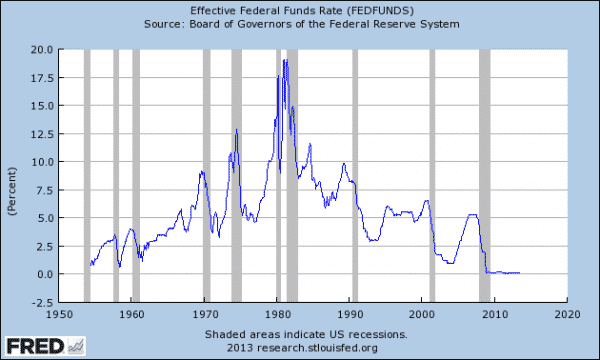 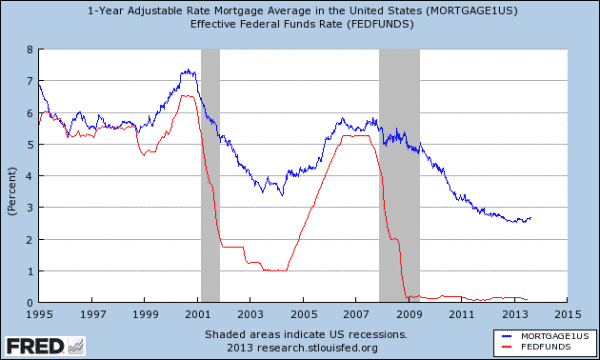 Moreover, the real question isn’t whether interest rates were lower than they had historically been in the past, but whether they were lower than they would otherwise have been if determined by the free market rather than efforts to centrally plan the economy. And the answer to this question is self-evidently in the affirmative, since it has been one of the central purposes of the Fed’s intervention in the market to push rates down below where they otherwise would be.

And we don’t need data and charts to illustrate how Krugman is being dishonest with his readers. One may simply examine what economists were saying at the time about the influence of the Fed’s low interest rates on the housing market:

“Millions of Americans have decided that low interest rates offer a good opportunity to refinance their homes or buy new ones.” – May 2, 2001

“To reflate the economy, the Fed doesn’t have to restore business investment; any kind of increase in demand will do…. [H]ousing, which is highly sensitive to interest rates, could help lead a recovery.” – August 14, 2001

“Low interest rates, which promote spending on housing and other durable goods, are the main answer.” – October 7, 2001

“To fight this recession the Fed … needs soaring household spending to offset moribund business investment. And to do that … Alan Greenspan needs to create a housing bubble to replace the NASDAQ bubble.” – August 2, 2002

“Mortgage rates did indeed fall briefly to historic lows, extending the home-buying and refinancing boom that has helped keep the economy’s head above water.” – July 25, 2003

“Now the question is what can replace the housing bubble…. But the Fed does seem to be running out of bubbles.” – May 27, 2005

“[T]he Federal Reserve successfully replaced the technology bubble with a housing bubble. But where will the Fed find another bubble?” – August 7, 2006

“Back in 2002 and 2003, low interest rates made buying a house look like a very good deal. As people piled into housing, however, prices rose—and people began assuming that they would keep on rising.” – July 27, 2007

Which economists said those things?

Actually, all of those quotes are from the same person. A person who just so happens to be Nobel Prize-winning economist who is also a well-known newspaper columnist. Yes, all of the above quotes are from Paul Krugman, whose record on the housing bubble I documented in my book Ron Paul vs. Paul Krugman: Austrian vs. Keynesian economics in the financial crisis. The facts didn’t change, but Krugman’s tune certainly did. This is easily explained. When he thought creating a boom in housing was the solution to fixing the economy, he was happy to brag about how it was a result of the policy he advocated of lowering interest rates. In fact, he criticized the Fed for not lowering rates enough. But, as everyone now knows, the housing bubble didn’t turn out so well. Krugman couldn’t admit that his policy prescription had been wrong, much less acknowledge that his entire Keynesian economic ideology upon which he based it was fundamentally unsound, and so you have such intellectually dishonest attempts to obfuscate the truth as his recent column.

As for his argument that since inflation has been low, therefore money printing couldn’t have been “excessive”; first of all, money printing is inflation. Price inflation is one consequence of monetary inflation. What Krugman means by “inflation” is a general rise in prices across a basket of consumer goods as measured by the government’s Consumer  Price Index (CPI). Krugman himself alluded to the fallacy he makes here in his blog post, linked to from his column, where, humorously, he writes, “Maybe you can argue that loose money, for a while, shows up in asset prices rather than goods prices (although I’ve never seen that argument made well).”

It would seem Krugman made that argument quite well himself when he was advocating a Fed policy of monetary inflation in order to push down interest rates “to create a housing bubble”, as he put it in August 2002.

It would also seem a logical corollary from the observation that the policy Paul Krugman advocated was a primary cause of the economic mess the U.S. finds itself in that following his further recommendation for how to get out of it, which is to just keep doing more of the same, is perhaps not such a wise thing to do.

It might be useful to point out, further, how Krugman, in the wake of the dot-com bubble, argued that since the Fed couldn’t lower short-term rates much further, it should be “willing to abandon conventional notions of prudence” by purchasing long-term government debt; an idea, he wrote, at first deemed “radical” and “branded as irresponsible”. As already noted, this “radical” and “irresponsible” policy is precisely the one the Fed has adopted since 2008.

The Fed’s monetary policy fits Albert Einstein’s definition of insanity. The Fed has engaged in the same policy that caused the housing bubble, with the only difference being that its monetary inflation has since occurred on an even greater scale. The Fed has more than tripled the monetary base since 2008, printing more money in just the last five years than it had during its entire existence before the financial crisis. 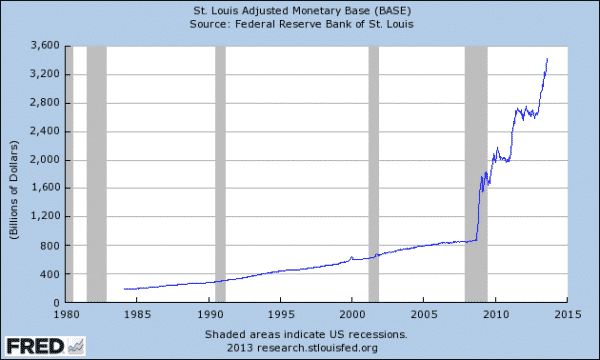 Fortunately, the average person on the street intuitively understands what Keynesian economists seem incapable of grasping; that wealth doesn’t come from a printing press. Unfortunately, the average person doesn’t have much say in how government bureaucrats try to to run their lives and centrally plan the entire economy, and what’s done is done. Americans should prepare for the inevitable consequences of the unprecedented monetary inflation the Federal Reserve has engaged in. The next crisis is going to make 2008 look like a walk in the park.