The Palestinian Authority is lying, according to the State Department. But who is really lying? 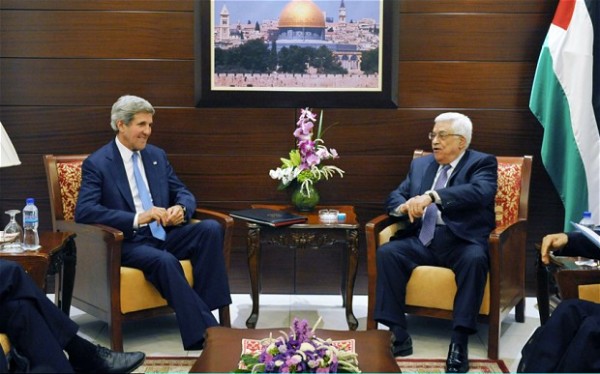 Signs of strain emerged Monday around the nascent Israeli-Palestinian peace talks, as a senior Palestinian official said Secretary of State John Kerry had “guaranteed us in writing” that negotiations would start from the 1967 lines, and American officials suggested he was not telling the truth.

Nabil A. Shaath, the Palestinian commissioner for international relations, said the Palestinians had agreed to enter the talks only because of the guarantee. He declined to provide a copy, but when asked if it was signed by Mr. Kerry personally, said: “Absolutely. We wouldn’t have done it without this.”

But American officials denied there was such a document, which would have been a significant gesture to the Palestinians and could have enraged Israel. “We have always said that if you don’t hear news about the talks from senior U.S. officials, you can’t count on it being reliable,” Marie E. Harf, a State Department spokeswoman, said in an e-mailed statement. “This is a good example.”

So the Palestinian Authority is lying, according to the State Department. But who is really lying? The article adds:

President Mahmoud Abbas of the Palestinian Authority was quoted by Israel Radio last week as telling leaders of his Fatah faction that he had agreed to talks “only once he’d received an official U.S. guarantee that negotiations would be on a two-state solution based on the 1967 lines.” Saeb Erekat, the chief Palestinian negotiator, also referred to a “written reference” to 1967 as one of nine reasons that Palestinians had returned to talks in an article published Sunday in Ay-Ayyam, a Ramallah-based newspaper….

Xavier Abu Eid, a spokesman for the Palestine Liberation Organization, said that he had seen the guarantee, and that it was provided to Mr. Erekat in Amman on July 19, the day after the Palestinian leadership rejected Mr. Abbas’s appeal to resume talks under pressure from Mr. Kerry. Mr. Shaath referred to previous negotiators who presented declarations on white paper without heading or signature to give themselves deniability, and said this was different.

As I wrote last month:

As an indication of the means by which the U.S. is pursuing this effort, Haaretz added:

Haaretz reported Tuesday that the American government had written letters of assurance to the Israeli and Palestinian negotiating teams, in order to make the renewal of talks possible. The letters reinforced the American positions regarding the 1967 borders, Palestinian refugees, and Israel’s identity as a Jewish state. The text of the letters remains classified and will not be published.

In a follow-up article, Haaretz reported:

In the letters, the U.S. apparently clarifies to the Palestinians that the American position is that negotiations should be carried out on the basis of the 1967 line with land swaps, and makes clear to Israel the U.S. position is that the future borders will not be identical to the 1967 lines but include changes in accordance to the reality on the ground.

Moreover, the letter to Israel apparently included an American declaration stating Israel is a Jewish state and that the U.S. position is that the Palestinian refugees should return to the future Palestinian state.

It is important to understand this.

That it is. Please read that full post to understand what is really going on (hint: the New York Times is not going to tell you.)

Also, not that it is any great prediction to say that this latest round of talks would fail, but also read my Foreign Policy Journal article explaining why they will fail for more background.

I have a forthcoming book on the U.S. role in the Israeli-Palestinian conflict. For exclusive sneak-peeks, subscribe to my newsletter.