US to EU: Reward Israel by Being Complicit In Its Illegal Policies!

The U.S. is essentially asking the E.U. to reward Israel for its violations of international law by rescinding guidelines intended to prevent E.U. countries from being complicit in its criminal policies. 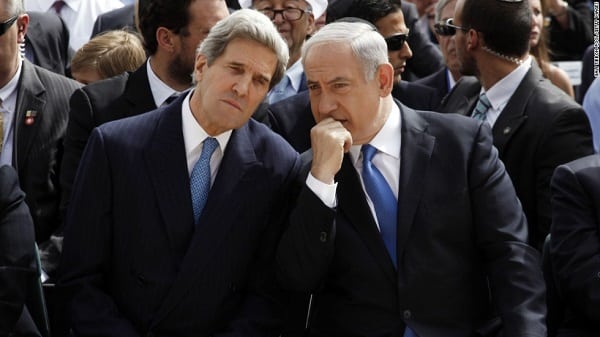 The New York Times reports that U.S. Secretary of State John Kerry is asking the European Union to rescind guidelines it announced earlier this year that will take effect at the beginning of 2014. The lead paragraph describes the guidelines as “new restrictions on financial assistance to Israeli institutions”, which is misleading. Two paragraphs later, it specifies “institutions in territories occupied by Israel after the 1967 war” (emphasis added).

As I explained in an article for Foreign Policy Journal,

The European Union has proposed new guidelines for how it will do business with the state of Israel that will require any Israeli entity seeking funding or cooperation from the E.U. to submit a declaration that it has no links to any of the occupied territories. Any agreement between the E.U. and Israel would need to include a section stating that its settlements in the territories are not part of Israel. The guidelines, obtained by the Israeli daily Haaretz, state that “only Israeli entities having their place of establishment within Israel’s pre-1967 borders will be considered eligible for consideration.” Human rights organizations like B’Tselem and non-governmental organizations like Peace Now that work to promote peace will be exempt from the requirement not to have links to the occupied territories.

Under international law, every inch of the Gaza Strip and the West Bank, including East Jerusalem, is considered “occupied Palestinian territory” to which Israel has no legal claim. Its attempts to annex Jerusalem have been condemned repeatedly by the U.N. Security Council, which has deemed the moves “illegal, null, and void”. Israel’s settlements in the West Bank are a violation of the Fourth Geneva Convention.

The Times describes the purpose of the E.U. guidelines as being “intended to pressure Israel to change its policy on Jewish settlements in the West Bank and seek a peace agreement with the Palestinians.” But as I assessed the situation,

This new development in Europe has presumably been prompted by the fear that Palestine might submit claims against Israel or other entities complicit in its violations of international law to the International Criminal Court (ICC). Palestine acquired the status at the U.N. of a non-member observer state in November 2012, which means it now has recourse to the ICC and International Court of Justice (ICJ) in its relations with Israel and other countries.

The U.S. is essentially asking the E.U. to reward Israel for its violations of international law by rescinding guidelines intended to prevent E.U. countries from being complicit in its criminal policies.

Instructively, nowhere in the entire article does the Times bother to mention that all of Israel’s settlements in the West Bank are illegal. This hardly seems an irrelevant detail.