‘Christian’ Obama Backer: If He Commits ‘The Supreme International crime’, I Will Support Him!

In a piece titled "It’s a Mad, Mad, Mad, Mad World", New York Times columnist Charles M. Blow comments about the debate about the situation in Syria by observing that many people will support Obama no matter what. He isn't kidding.

In a piece titled “It’s a Mad, Mad, Mad, Mad World“, New York Times columnist Charles M. Blow comments about the debate about the situation in Syria by observing that many people will support Obama no matter what. He isn’t kidding.

He provides an example:

As someone tweeted to me on Tuesday night, “I support my President and ANY decisions he makes.” She continued, “we elected him to do a job so we must pray for his discernment and allow him to do it.”

For many like this woman, their faith in Obama is resolute and unshakable.

Indeed. I was curious, so I clicked the link Blow provided to her tweet.

Other tweets of hers in this thread include the following: “we elected him to do a job so we must pray for his discernment and allow him to do it”, “I just pray he is allowing God to lead him”. A recent retweet of hers is “Jesus is LOVE!”

We may deduce that she considers herself a Christian. But who is her god? Is it Yahweh, or Obama? In whom does she place her faith? Is she a disciple of the teachings of Yeshua (a.k.a. “Jesus”), or of the state religion?

Here is our what happened when I replied to her to find out: 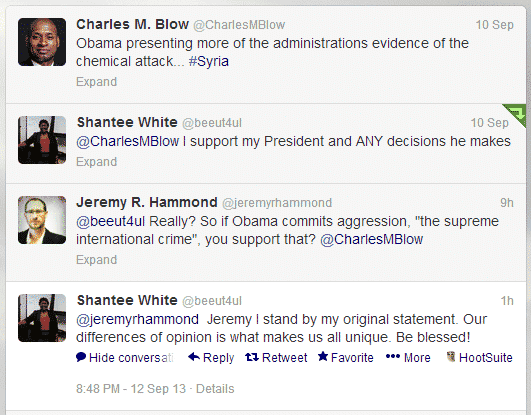 We may deduce that Shantee thinks that as long as she prays to her god for Obama to make the right decision, then whatever Obama does must be God’s will. To Shantee, evidently, Barack Hussein Obama is God’s annointed, a messiah.

Shantee White is the kind of hypocrite Yeshua (a.k.a. “Jesus”) was referring to when he spoke of washing the outside of the cup while the inside is full of filth. Here she is, expressing her “opinion” that if Obama was to commit not only war crimes but “the supreme international crime, differing only from other war crimes in that it contains within itself the accumulated evil of the whole”, as the crime of aggression was defined at Nuremberg, she would support it, all the while putting on the air of being a good “Christian” by wishing me to “Be blessed!”

Shantee White may regard herself as a Christian, but like so many self-described “Christians”, she is by no means a disciple of Yeshua, nor has she understood the most basic principles in his message of “LOVE!”