Krugman vs. Krugman on the Effects of Unemployment Benefits

Krugman tries to deceive his readers into thinking that it is merely a prejudicial slander from conservatives to suggest that unemployment benefits create a perverse incentive for people not to find work, despite the fact that he knows perfectly well that it is true. 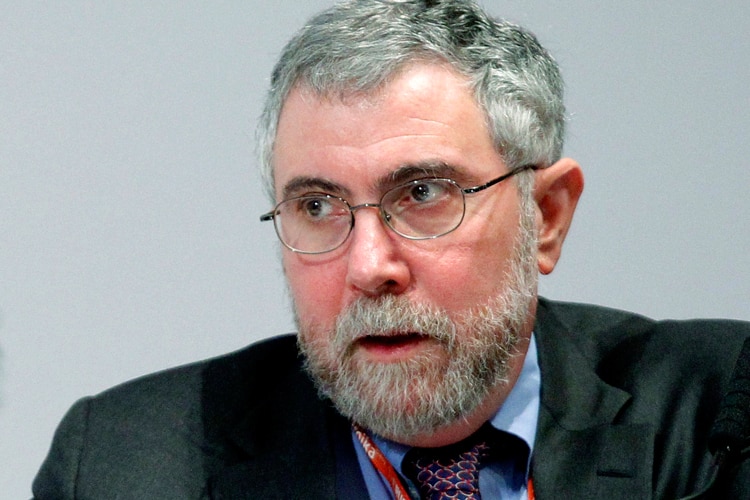 Paul Krugman is a very intelligent person. He is also very dishonest. This is a dangerous combination for someone with his influence. He writes:

Before the financial crisis, 63 percent of adult Americans were employed; that number quickly plunged to less than 59 percent, and there it remains.

How did that happen? It wasn’t a mass outbreak of laziness, and right-wing claims that jobless Americans aren’t trying hard enough to find work because they’re living high on food stamps and unemployment benefits should be treated with the contempt they deserve.

Now, anyone reading this would reasonably conclude that Krugman’s meaning is that unemployment benefits don’t incentivize people not to get a job — but if you read it again very carefully, you will see that he doesn’t actually say that.

Look again. Break it down. He first denies that it was a “mass outbreak of laziness”. Okay, we may stipulate that. But, then, to say that unemployment benefits creates a perverse incentive for people not to get jobs is not at all the same thing as saying that people aren’t getting jobs because they were disease-stricken with a “mass outbreak of laziness”, which suggests some inexplicable behavioral phenomenon rather than perfectly rational behavior. Moreover, all Krugman is denying here is that mass laziness is the cause of unemployment; he does not deny that it could be the effect of unemployment. That is to say, it is possible that rather than choosing to remain jobless because they are lazy, people might choose to be lazy because they are jobless, so long as remaining jobless allows them to collect unemployment benefits.

So, we may completely agree with Krugman’s statement here and yet nevertheless recognize that unemployment benefits are a perverse incentive for people not to get a job.

Now, you might be thinking, “Okay, I see what you mean, he didn’t actually deny that such welfare programs contribute to unemployments, but that was his meaning anyway.” Perhaps. But I don’t think so. I think he chose his wording very deliberately. Why? Because Krugman has also written this (h/t Jon Sanders commenting on John C. Goodman’s post “Are We Being Unfair to Paul Krugman?“):

Public policy designed to help workers who lose their jobs can lead to structural unemployment as an unintended side effect. Most economically advanced countries provide benefits to laid-off workers as a way to tide them over until they find a new jobs. In the United States, these benefits typically replace only a small fraction of a worker’s income and expire after 26 weeks. In other countries, particularly in Europe, benefits are more generous and last longer. The drawback to this generosity is that it reduces a worker’s incentive to quickly find a new job. Generous unemployment benefits in some European countries are widely believed to be one of the main causes of ‘Eurosclerosis,’ the persistent high unemployment that affects a number of European countries.

So we see how Krugman tries to deceive his readers into thinking that it is merely a prejudicial slander from conservatives to suggest that unemployment benefits create a perverse incentive for people not to find work, despite the fact that he knows perfectly well that it is true.

Goodman, in the post I mentioned above in parentheses, also comments about Krugman’s intellectual dishonesty. He writes:

“How did that happen?” Krugman asks. One answer is supplied by University of Chicago economist Casey Mulligan — one of the top labor market economists in the country and a regular contributor to The New York Times economics blog. In a new book, Mulligan estimates that roughly half of the excess unemployment we have been experiencing is due to the lure of entitlement benefits — food stamps, unemployment compensation, disability benefits, etc. In other words, we are paying people not to work. In a separate analysis, Mulligan estimates that much of the remaining unemployment may be due to other Obama administration policies, especially the Affordable Care Act.

So what does Krugman have to say about Mulligan’s study? Nothing. Nothing? Not a thing. Not about Casey’s study or any other serious study.

Goodman points out that “facts of reality do not mysteriously become untrue even if they are treated with contempt.” Then he continues:

Through the years, I have worked with academic economists all over the country, helping them craft editorials, statements for press releases, and various other lay descriptions of their work. In every case, the primary concern of the scholar was: What will other economists think when they read this? Most members of my profession think they have a duty to the profession. When they speak to the public, they want their colleagues to see that in the process of simplifying for a lay audience, they have fairly and accurately reported what economic research shows.

Krugman, who hasn’t done serious research for years, clearly doesn’t care what his fellow economists think. He can, without the slightest evidence of embarrassment, pretend that an entire body of empirical research doesn’t even exist. That’s his choice. However, The New York Times bills him as a Nobel Laureate in economics. So when Hollywood types read Krugman, they think they are reading economics.

This is bad for the entire profession. Krugman rarely writes a column without including a venomous attack on those who disagree with him — questioning their ethics, their honesty and their motives. But in economics, as in the other sciences, arguments ad hominem aren’t legitimate arguments.