Observing how Krugman uses both selection bias and cherry-picking to support his argument, it becomes evident that it is Krugman himself who is trying to create false impressions about Obamacare.

In a recent column, Paul Krugman claims that “all the recent news on health costs has been good”. “There has been a striking slowdown in overall health costs since the Affordable Care Act [ACA] was enacted,” he writes, “with many experts giving the law at least partial credit. And we And now have a good idea what insurance premiums will be once the law goes fully into effect; a comprehensive survey by the Kaiser Family Foundation finds that on average premiums will be significantly lower than those predicted by the Congressional Budget Office when the law was passed.”

Of course, it is hard to see how “all the recent news on health costs has been good” when that news includes, for example, a press release from the Ohio Department of Insurance announcing that “individual consumers buying health insurance on the federal government’s health insurance exchange for Ohio will pay an average of 41 percent more than they did in 2013.” Ohio isn’t alone. As the New York Times reported earlier, “Health insurance companies across the country are seeking and winning double-digit increases in premiums for some customers,” particularly for “small businesses and people who do not have employer-provided insurance”.

Krugman himself acknowledges that the news isn’t so good if you are young and healthy. As I commented about a recent blog post of his,

Paul Krugman writes that, “Under Obamacare, someone blessed with good health” — or someone who maintains good health by eating right and exercising, for that matter — “might find his (or, more rarely, her) premiums going up” in order to subsidize the costs of care for those who aren’t blessed with good health — or those whose high costs for health care is a consequence of their own unhealthy lifestyle choices, for that matter.

So if you are young and healthy, Krugman admits, you might be among the “losers” of this game. Krugman’s answer to the so-called Affordable Care Act’s critics who say that “Not everyone wins from the policy!” is “Well, duh.”

That might come as a shock to people who supported Obamacare because they believed Obama when he sold it to them on the grounds that everyone’s yearly premiums would be reduced by an average of $2,500 per family.

Of course, Krugman is right. This isn’t a surprise. The whole purpose of the individual mandate, after all, is to force young, healthy people to subsidize the costs for those who require a lot of care.

Krugman has referred to the Kaiser Family Foundation report in a blog post, where he cited it to laud that it showed that health insurance premiums were going in “the right direction”. As I commented on that post,

Is “the right direction” down?

Premiums will continue to increase. The Kaiser Family Foundation just found that they would increase at a lower rate than previously expected. So according to Paul Krugman, “the right direction” for insurance premiums to be going is still up. So here’s to continually increasing premiums. Hooray.

But what about Krugman’s suggestion that Obamacare is one of the reasons for the deceleration in costs for health insurance? As already alluded to, that claim doesn’t fly when it comes to states expected to see an increase in premiums due to Obamacare.

What about more generally speaking, though? Well, just follow his link. It goes to a Think Progress article titled “The Remarkable Slowdown In Health Care Costs Since The Passage Of Obamacare”. That headline might seem to bolster Krugman’s assertion that we may attribute the slowdown to Obamacare. Except that the headline is deceptive.

The Think Progress article points out that while “growth in health care costs is abating”—again, not to be confused with actual decrease in the costs of health care—“premiums are still increasing faster than workers’ wages … and general inflation”. (More “good” news. Hooray.)

“What’s behind the cost slowdown”, the article continues, “is a much harder question to answer. “Economists argue that the lackluster economic recovery is leading Americans to seek out less health care services and point to the trend of employers keeping premiums lower by shifting costs into higher deductibles and co-pays.”

But the piece goes on to assert that, according to the data in the Kaiser Family Foundation report, “the rate of growth has slowed since the law’s passage in March of 2010, though it is impossible to directly attribute the cost trend to the new law” (emphasis added).

Why is this admittedly “impossible” to attribute to Obamacare? Well, for one, because the rate of growth has slowed not only “since the law’s passage in March of 2010” but since 2003.

In the last paragraph, the article states: “Annual growth of medical spending has also slowed “from a high of about 8.8 percent in 2003 to an average of about 3 percent per capita from 2009 to 2011, according to data reported in January by the U.S. Centers for Medicare and Medicaid Services.”

In other words, the annual increase in the costs for health care peaked in 2003 and has abated ever since. Obviously, this can’t be attributed to Obamacare. Indeed, it truly is “impossible” that Obamacare is the cause of this 10-year trend.

But let’s turn to another Kaiser Family Foundation report, titled “Assessing the Effects of the Economy on the Recent Slowdown in Health Spending”. Here’s a chart from it showing what was just discussed: 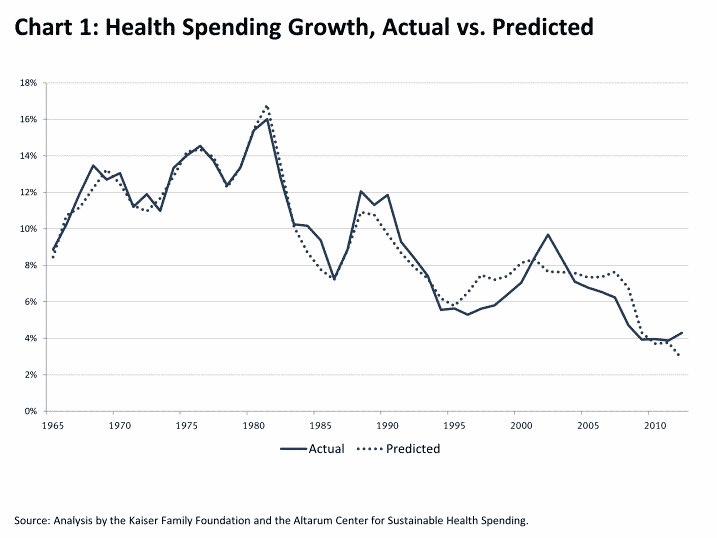 This report states that “There is a very strong statistical link between business cycles and inflation and national health spending.” It also states, “To the extent this is a temporary phenomenon driven by the economic downturn and abnormally low inflation, we can expect health spending growth to bounce back up in the future as the economy recovers.” It actually suggests that Obamacare will result in a “modest” increase in insurance costs, but adds that this would be a “one-time bump of a couple percent”, which would “likely coincide with an expected economic recovery, so higher growth rates in health spending due to that recovery should not be attributed to the ACA simply because of the coincidental timing.”

By the same reasoning, if there is no “recovery”, and yet growth in rates in health spending nevertheless occur, then we may attribute the risings costs to Obamacare.

Back to Krugman’s column, to review, the only source he cites for his suggestion that Obamacare is contributing to the slowdown in health care costs, the Think Progress article, actually admits that it is “impossible” to attribute this trend to Obamacare.

Krugman, naturally, doesn’t relay that part of the article to his readers. He then repeats this kind of cherry-picking further down the page, where he writes that

conservative “experts” are creating false impressions about public opinion. Just after Kaiser released a poll showing a strong majority — 57 percent — opposed to the idea of defunding health reform, the Heritage Foundation put out a poster claiming that 57 percent of Americans want reform defunded. Did the experts at Heritage simply read the numbers upside down? No, they claimed, they were referring to some other poll. Whatever really happened, the practical effect was to delude the right-wing faithful.

One, the suggestion that Heritage was trying to “delude” people just assumes that the poll showing the number Krugman prefers (57% opposed to defunding Obamacare) is more accurate than the poll cited by Heritage. Thus, Krugman is here just unashamedly displaying his selection bias. (The Heritage poll asked: “Do you support or oppose de-funding, or removing the funding, from the Obama health care law?” The results were 56.6% who supported and 33.7% who opposed doing so.)

Two, even when we turn to the poll that gives the result Krugman prefers, we find that it in fact shows that only 37% of those surveyed had a favorable view of Obamacare compared to 42% who viewed it unfavorably.

The 57% figure Krugman refers to are the majority of Americans who, although they may be opposed to Obamacare, “say they disapprove of the idea of cutting off funding as a way to stop the law from being implemented” (emphasis added).

Remember what Krugman’s point is here: that people who hold a different view about Obamacare than Krugman does are trying to “delude” people by creating “false impressions about” what? About “public opinion” on Obamacare. And what does the very poll Krugman cites in an attempt to prove his point show? That more Americans view Obamacare unfavorably than favorably. Observing how Krugman uses both selection bias and cherry-picking to support his argument, it becomes evident that it is Krugman himself who is trying to create false impressions about public opinion on Obamacare, the practical effect of which is to delude those who consider him a reliable source for good information about the health care issue.