The very same CBO report Krugman is looking at defines that scenario as a "crisis", and that very same report also clearly suggests that this is a very real possibility. 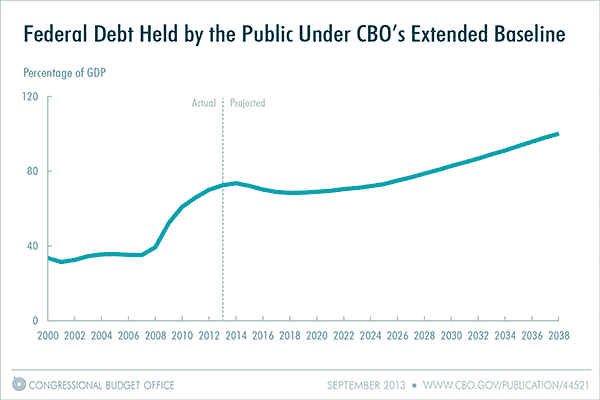 This is classic Krugman. He says something and then says something else that renders what he just said completely meaningless. Under the post title “This Is Not A Crisis“, he writes:

The new CBO long-term budget projections are out, and while they’re not good, they don’t show crisis levels of debt even looking out a quarter-century. Unless, that is, you believe that debt of 100 percent of GDP is the end of the world….

So notice that little factoid he slips in there: the CBO projects the debt to equal 100% of GDP. 100% of GDP. But nothing to see here, folks. Move along. This is not a “crisis”. Why not? Because “crisis”, as Krugman is using the word, is defined as “the end of the world”. And since the U.S. running a debt equal to 100% of GDP certainly won’t mean “the end of the world”, it therefore isn’t a “crisis”. A “crisis” would be something like a giant asteroid falling to the Earth, or the sun going supernova on us, or something like that. But the debt equallying 100% of GDP? Bah!

It’s also interesting to compare Krugman’s assurances that there’s no debt crisis with what the CBO says:

Federal debt held by the public is now about 73 percent of the economy’s annual output, or gross domestic product (GDP). That percentage is higher than at any point in U.S. history except a brief period around World War II, and it is twice the percentage at the end of 2007. If current laws generally remained in place, federal debt held by the public would decline slightly relative to GDP over the next several years, CBO projects. After that, however, growing deficits would ultimately push debt back above its current high level. CBO projects that federal debt held by the public would reach 100 percent of GDP in 2038, 25 years from now, even without accounting for the harmful effects that growing debt would have on the economy (see the figure below). Moreover, debt would be on an upward path relative to the size of the economy, a trend that could not be sustained indefinitely.

But remember, debt equaling 100% of GDP having “harmful effects” on the economy and still on “an upward path”  that ultimately “could not be sustained indefinitely” does not fall under the definition of a “crisis”, because it won’t mean “the end of the world”.

Krugman is implicitly arguing that this level of debt is perfectly sustainable. But let’s return again to the CBO at some of the aforementioned “harmful effects” on the economy:

How long the nation could sustain such growth in federal debt is impossible to predict with any confidence. At some point, investors would begin to doubt the government’s willingness or ability to pay U.S. debt obligations, making it more difficult or more expensive for the government to borrow money….

Increased borrowing by the federal government would eventually reduce private investment in productive capital, because the portion of total savings used to buy government securities would not be available to finance private investment. The result would be a smaller stock of capital and lower output and income in the long run than would otherwise be the case….

The risk of a fiscal crisis—in which investors demanded very high interest rates to finance the government’s borrowing needs—would increase.

Could we describe it as “the end of the world” if investors lost confidence in the government’s ability to pay its debt obligations and demanded very high interest rates to purchase more of that government debt? Because, clearly, the very same CBO report Krugman is looking at defines that scenario as a “crisis”, and that very same report also clearly suggests that this is a very real possibility.