Want an example of why the mainstream media is less than useless when it comes to educating people about the U.S. economy? 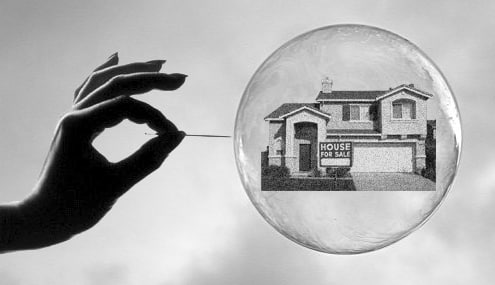 Want an example of why the mainstream media is less than useless when it comes to educating people about the U.S. economy? Look no further than this piece in the New York Times titled “Housing Recovery Seems Still on Track”. Talk about cognitive dissonance. It begins:

The housing market, one of the main drivers of the economic recovery, continues to gain strength despite the drag of rising mortgage rates and other economic headwinds, but some analysts are worried that it may slow in the months ahead.

For now, though, builders are building, sellers are selling and mortgage lenders are less nervous about extending credit to buyers.

The heady price increases in the first half of the year slowed a bit in July, according to data released on Tuesday.

But in the face of pent-up demand and emboldened consumers, home values were still heading upward at a healthy pace….

How is it that homes becoming increasingly unaffordable is a sign of “strength” in this sector of the economy? If computers and cell phones and other electronics got more expensive instead of cheaper, would we say the electronics industry was getting stronger?

Furthermore, is the fact that the U.S. economy continues to suffer from the consequences from a housing bubble now just to be tossed down the memory hole? Did we learn nothing from that bubble?

Higher home prices help the economy not just by strengthening the construction and real estate industries, but by making homeowners feel wealthier and more likely to spend.

While the number of Americans who lost the equity in their homes in the housing crash set records, rebounding prices have helped nudge more and more households back above water.

Seems not. The record has skipped. Of course, all this isn’t a good thing if housing is in yet another bubble created by the Fed’s artificially low interest rates. Yet, the mainstream view is not that we should be worried about low rates spurring another bubble, but that the Fed can’t keep rates low enough:

Rising rates may not torpedo the housing market recovery, but they have made refinancing much less appealing.

Oh no! Of course, this implicitly recognizes the fact that fewer people would be refinancing if rates were determined by the market rather than being pushed below where they otherwise would be by the Fed’s monetary inflation. Which is exactly what caused the housing bubble in the first place.

Still, some analysts questioned whether fundamental factors like job and wage growth would sustain the market and restore first-time buyers to the market.

Gosh, you mean it might be possible that this so-called “growth” in the housing market is not sustainable because the fundamentals aren’t there? You mean to suggest it might just be another bubble?

The funniest thing about this article is the video they show at the top of the page. I happened to watch it elsewhere before reading this article, so when I saw that headline coupled with that video, I had to laugh. Remember how the lead paragraph reported that analysts were worried that the housing market might “slow” due to rising rates? Yeah, well, watch that video. As the article reports (almost to the end, of course):

Asked if the slowdown in growth was alarming, Robert Shiller, the Yale economist who helped develop the home price index, said no. “I’m not worried,” he said in an interview with CNBC. “I think that would be a good thing.”

His greater worry, he said, was “more about a bubble — in some cities, it’s looking bubbly now.”

This obviously didn’t sink in with the article’s author, as evident by the axiomatic assumption throughout the rest of it that the rising home prices are a good thing and that what we should be worried about is rising interest rates.

To learn more about the causes of the last housing bubble, check out my book, Ron Paul vs. Paul Krugman: Austrian vs. Keynesian economics in the financial crisis. Here’s what Barron’s had to say about it in their review of it last month:

Any work of economics that can make you laugh is at least worth a look. If in less than 100 pages it also informs you about a subject of great importance, it might just qualify as a must-read. Jeremy Hammond, a political journalist self-taught in economics and a writer of rare skill, has produced such a book…..

This short work conveys more insight into the causes and cures of business cycles than most textbooks, and more about the recent business cycle than most volumes of much greater length.

I’ve priced it low. Get it in paperback or Kindle from Amazon.