Paul Krugman: Americans Should Learn About the Definition of ‘Freedom’ from FDR

Should we really be taking lessons about the definition of "freedom" from the guy who signed an executive order forcing Japanese Americans to be imprisoned in concentration camps during World War II? 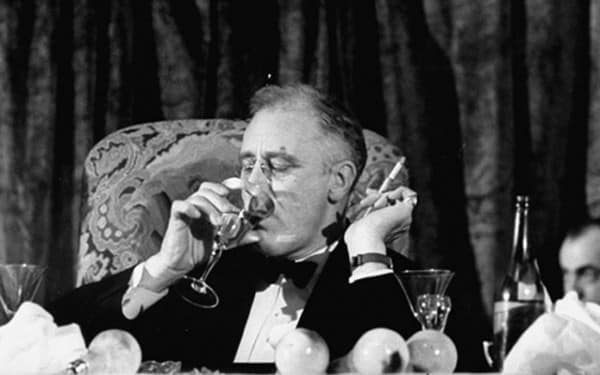 In a recent column about the government’s budget problem, Paul Krugman wrote:

The word “freedom” looms large in modern conservative rhetoric…. The right’s definition of freedom, however, isn’t one that, say, F.D.R. would recognize.

Okay, whoah. Pause. Should we really be taking lessons about the definition of “freedom” from the guy who signed an executive order forcing Japanese Americans to be imprisoned in concentration camps during World War II?

In particular, the third of his famous Four Freedoms — freedom from want — seems to have been turned on its head. Conservatives seem, in particular, to believe that freedom’s just another word for not enough to eat.

Okay, whoah. Pause. Should we really be taking lessons about how to help ensure that people have enough to eat from the guy whose administration thought it was a good idea during the Great Depression for farmers to produce fewer crops in order to keep prices up, who, to the same end, sought to leave land uncultivated, to plow under crops, and to slaughter animals?

Multiple careful economic studies have shown that the economic downturn explains the great bulk of the increase in food stamp use. And while the economic news has been generally bad, one piece of good news is that food stamps have at least mitigated the hardship, keeping millions of Americans out of poverty.

Okay, whoah. Say what you will about Republicans. I’m no fan, either. But, hey, you know, maybe if the Federal Reserve hadn’t followed the very policy Paul Krugman advocated of running the printing presses to lower interest rates in order “to create a housing bubble to replace the NASDAQ bubble”, the inevitable bursting of which is what precipitated the economic trouble the country still finds itself in, including the increasing inability of people to buy even basic necessities like food, then all those millions of Americans now dependent on them wouldn’t have needed food stamps in the first place.

Krugman’s self-righteousness is pure hypocrisy. See my book Ron Paul vs. Paul Krugman: Austrian vs. Keynesian economics in the financial crisis for the complete rundown of his record on the housing bubble.