Contrary to the US Mainstream Media Narrative, the Truth Is Rouhani Called Obama

The Obama administration was contacted by the Iranians. It was Rouhani who placed a call through to speak to Obama, not vice versa. 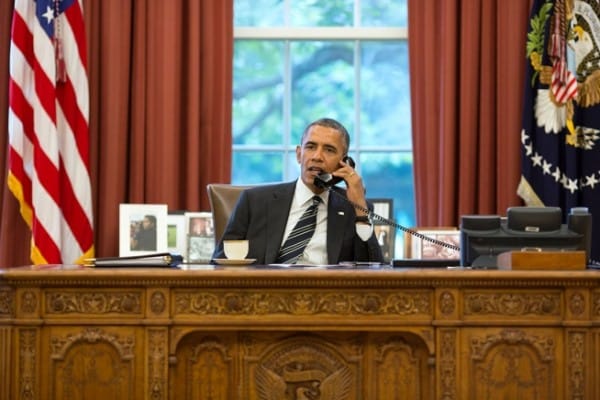 The New York Times reported that:

In a hurriedly arranged telephone call, Mr. Obama reached Mr. Rouhani as the Iranian leader was headed to the airport to leave New York after a whirlwind news media and diplomatic blitz.

Iranian President Hassan Rouhani was on his way to John F. Kennedy International Airport in New York about 2:30 p.m. Friday when the phone rang in his car. President Obama was on the line from the Oval Office, and the two men spoke for 15 minutes, ending a decades-long diplomatic freeze.

Breaking a silence of more than three decades between the leaders of the United States and Iran, President Obama on Friday called President Hassan Rouhani to express confidence that the two can find a “comprehensive solution” to their nuclear standoff and begin restoring the nations’ damaged relationship.

Hoping to boost a new round of talks, Obama called Rouhani as the Iranian was driving to the airport after a week at the United Nations.

So we have Obama reaching out to Rouhani via a phone call. Moreover, the N.Y Times added:

The call came just days after Mr. Obama had hoped to encounter Mr. Rouhani at a luncheon at the United Nations and expected to shake hands. Mr. Rouhani skipped the luncheon and later indicated it was premature to meet Mr. Obama.

Rouhani had been unwilling to have a brief encounter with Obama when both were at the United Nations this week.

Though Rouhani had declined an opportunity to shake Obama’s hand earlier in the week, with observers speculating that he feared the image would upset hard-liners at home, he was ready to receive the call and responded warmly.

In reaching out to Rouhani, Obama was carrying through on the idea he first promoted in his 2008 campaign of seeking high-level talks with hostile governments.

The idea yielded little payoff with the Iranians early in his administration, as Tehran rebuffed his approaches.

So we have the picture of an Iranian President reluctant to engage with the U.S. President, but the latter nevertheless going out of his way to reach out to the former.

What’s wrong with this narrative? For one, Rouhani has explained that the meeting with Obama was proposed with little prior notice to be able to make arrangements and that the Iranians “were not opposed” to it. There were “no problems in terms of shaking Mr. Obama’s hand and negotiating with him,” he said. Nor did he want to rush into it. “We must take these steps carefully,” he added. “We are ready to negotiate, but we didn’t have enough time to make that happen…. The handshake is a symbolic issue.”

So we see that Rouhani is not reluctant to engage with Obama in terms of sitting down and seriously talking about their two nations’ differences, he just isn’t eager to rush into a meaningless photo op, which he explained in very polite and diplomatic terms.

Moreover, remember last year when Netanyahu wanted to meet with Obama, but Obama didn’t? Remember how Obama’s critics who argue that he isn’t supportive enough of Israel’s criminal policies said this showed that Obama was slighting Netanyahu? And remember the Obama administration explained that this wasn’t a slight, it just couldn’t be arranged on short notice? Well, if that explanation is good enough for Obama, why isn’t it good enough for Rouhani?

What else is wrong with this narrative? Well, look at what Obama actually said in announcing this phone call:

Just now I spoke on the phone with President Rouhani of the Islamic Republic of Iran.

“I spoke on the phone with President Rouhani”, he said. Notice that he didn’t say “I called President Rouhani”. There’s a clue. Further into its report about it, the N.Y. Times slipped another clue in passing:

A senior Obama administration official, who briefed reporters on the condition of anonymity because of diplomatic sensitivities, said the White House had expressed the president’s interest in meeting Mr. Rouhani to the Iranians this week but was surprised when they suggested the phone call.

The White House was surprised when the Iranians suggested the phone call. Turning to the international press, we can read:

The impetus for the call came from Iranian officials, whom US officials said told them in New York on Friday morning that Rouhani wanted to speak to Obama before leaving the United Nations General Assembly.

So, contrary to the narrative woven by the U.S. mainstream media, we see that Rouhani wanted to be able to speak with Obama before leaving New York but just wasn’t able to, and, furthermore, that  it was not Obama’s impetus to call Rouhani, but vise versa.

The Obama administration has actually confirmed that this latter version of the truth is the correct one. Fareed Zakaria went off the script and bothered to ask the very sensible question of National Security Adviser Susan Rice:

Susan Rice, can you give us a sense of how this phone call happened, who called whom?

I think, as many people know, we had indicated earlier in the week, an openness to a brief, informal encounter when President Obama was in New York at the General Assembly. And while we were open to that, the Iranians indicated that it was complicated for them in their context and so it didn’t occur.

Today, somewhat surprisingly, we were contacted by them to say that President Rouhani would like to speak to Pres. Obama on the telephone on his way out of town, and we were able to make that call come together and it was a constructive conversation.

So who called whom? The Obama administration was contacted by the Iranians. It was Rouhani who placed a call through to speak to Obama, not vice versa.

It’s unlikely he could have been placed through to the U.S. President immediately. I doubt Rouhani waited on hold. So, what presumably happened from this initial call was that the message was urgently passed along to Obama, arrangements made for translation, and then a return call was made from the White House through to Rouhani.

Of course, you would never know that reading the Washington Post or Los Angeles Times and only the more scrupulous readers practiced in seeing through propaganda narratives would be able to deduce the truth from reading the New York Times piece.