NYT Blames Republicans for a Problem Created by Obamacare 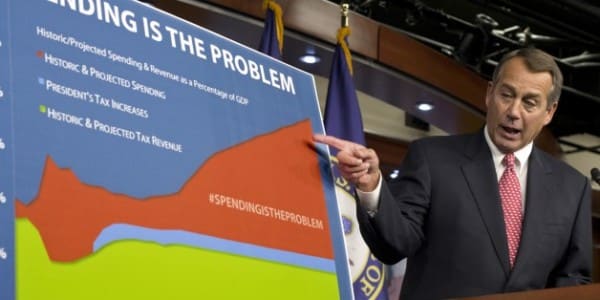 Republicans are wrong to attach conditions like delaying Obamacare to their votes to raise the debt ceiling. The correct position would be to unconditionally oppose doing so.

On that subject, the New York Times editorializes:

Early Sunday morning, all 231 House Republicans (along with 17 Democrats) decided that crippling health care reform was more important than keeping the government’s doors open. It was one of the most irresponsible votes since the last shutdown in 1996.

Keeping the government’s doors open has less than zero importance to me, which is approximately the same importance I grant to getting Obamacare fully implemented. Continuing, the Times adds:

Delaying the health law by a year, supported by all but two House Republicans, would prevent 11 million uninsured people from getting coverage in 2014 and raise premiums for those buying coverage in the individual insurance market.

Yeah, delaying implementation of parts of Obamacare would “prevent” people from getting insured by not forcing young, healthy Americans under threat of penalty to buy it against their will.

And, yeah, delaying the individual mandate would result in an increase in premiums because insurers will still be forced to cover people with “preexisting conditions”. To quote the Times’ own linked source, a CBO report, “Insurers would still be required to provide coverage to any applicant, would not be able to vary premiums to reflect enrollees’ health status or to limit coverage of preexisting medical conditions, and would be allowed to vary premiums by age only to a limited degree.”

So, you see, the problem here that will cause insurance premiums to rise is that young, healthy people not only will not be coerced into buying insurance, but they have an incentive not to buy a policy unless and until they get sick, which is a problem that was created by Obamacare itself.

So the facts the Times cites, properly understood, aren’t an argument for not delaying parts of Obamacare, they are an argument for simply doing away with the whole thing.