Obama Trying to Prolong Afghanistan War Just As He Did Iraq

The Obama administration is trying to persuade the Afghanistan government under President Hamid Karzai to accept U.S. terms for a status of forces agreement to prolong the U.S. war there, but how Karzai is sticking to his own terms. 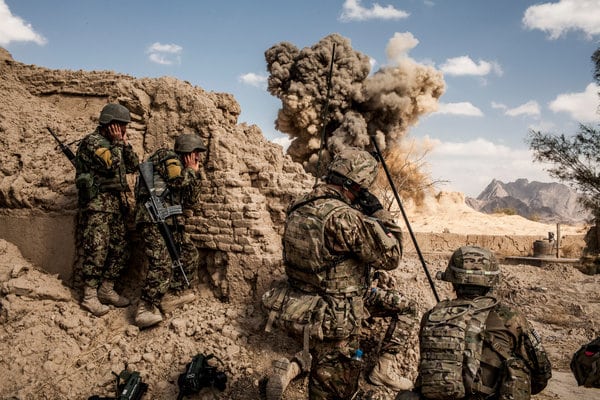 The Obama administration is trying to persuade the Afghanistan government under President Hamid Karzai to accept U.S. terms for a status of forces agreement to prolong the U.S. war there, but Karzai is sticking to his own terms. The New York Times comments:

The impasse, after a year of talks, has increased the prospect of what the Americans call the zero option — complete withdrawal — when the NATO combat mission concludes at the end of 2014. That is precisely the outcome they hoped to avoid in Afghanistan, after having engaged in a similarly problematic withdrawal from Iraq two years ago.

Ah, yes. The comparison to the situation in Iraq is apt, there, too, Obama wanted not to end the war and withdraw U.S. troops, but to extend the war and occupation. We may recall:

While Obama is fond of taking credit for ending the war in Iraq, in fact, theStatus of Forces Agreement (SOFA) under which all U.S. combat troops were withdrawn at the end of 2011 was signed on November 17, 2008, under the Bush administration. Obama was critical of the SOFA, his publicly stated position being that the troops should be withdrawn sooner. “In contrast,” the New York Times noted at the time, “President-elect Obama had campaigned under a promise to withdraw all American combat brigades from Iraq by May 2010”.

Obama not only did not keep that promise, but his administration sought since as early as September 2010 to obtain a new agreement with Iraq under which 15,000 to 20,000 combat troops would remain beyond the deadline at the end of 2011

Of course, when Obama was campaigning for reelection, he ridiculously painted himself as an anti-war candidate. He even said in the third presidential debate:

What I would not have done is left 10,000 troops in Iraq that would tie us down.

That was right after Romney said he agreed with Obama that there should be a status of forces agreement, and Obama interrupted to say, “That’s not true.” To which Romney knowingly inquired, “Oh, you didn’t? You didn’t want a status of forces agreement?” Obama’s answer? “No.” You can read more details about that incident and the truth about Obama’s policy in my article “Obama’s Revisionist History on Ending the Iraq War“.

Obama lies with impunity, constantly. The truth is a matter of public record, and Obama knew that anyone who had been paying attention to U.S. policy in Iraq over the years would know that he was lying, but that didn’t stop him. This is a character trait of psychopaths.

Of course, Romney’s only criticism was not that Obama was trying to prolong the U.S. war in Iraq, but that he failed to do so.

Back to Afghanistan, the Times reports:

It could also jeopardize vital aid commitments. Afghanistan is decades away from self-sufficiency — it currently covers only about 20 percent of its own bills, with the rest paid by the United States and its allies.

“It is a practical truth,” the administration official said, that without a deal, “our Congress would not likely follow through on the assistance promises we’ve made, nor would other partners.”

So U.S. “aid” essentially serves as a bribe to get the Afghan government to do what the U.S. wants it to, and if it won’t, the aid will be cut off. No surprise there, of course. The nature of U.S. “aid” in general has nothing to do with wanting to help people in other countries and everything to do with rewarding compliant regimes and threatening them with a cutoff if they get out of line.

For instance, the U.S. threats to end aid to the Palestinian Authority if it pursues remedy for Israel’s crimes against the Palestinians through the U.N., International Court of Justice, and International Criminal Court, rather than returning to the U.S.-led so-called “peace process”, which is the process by which the U.S. and Israel block implementation the two-state solution, in favor of which there is otherwise an international consensus.

In Iraq, the U.S. wanted legal immunity for its troops. They’ve already gotten Karzai to agree to that. The sticking points instead are:

The first is Afghanistan’s insistence that the United States guarantee its security, much like any NATO ally, and the second is Mr. Karzai’s refusal to allow American forces to keep searching in Afghanistan for operatives of Al Qaeda. Instead, he has proposed that the United States give its intelligence information to Afghan forces and let them do the searching, said Aimal Faizi, a spokesman for the president.

As Gareth Porter has observed, with regard to negotiations over a status of forces agreement last year, “Karzai’s persistence in pressing that demand reflects the widespread popular anger at night raids,” and so agreeing to allow them continue would only play into the Taliban’s hands.

“Killing people in homes and killing people in villages is bringing the war on terror to Afghans,” Mr. Faizi said in an interview. “This is not focusing on the root and support systems behind the terror.”

As the Times reported last year,

many senior coalition and Afghan officials are now concluding that after nearly 12 years of war, the view of foreigners held by many Afghans has come to mirror that of the Taliban.

That is to say, the people of Afghanistan don’t like U.S. forces occupying their soil. Of course, the U.S. war in Afghanistan is increasingly unpopular among the American public. A poll this summer showed that a sizeable majority, 67%, didn’t feel the war has been worth fighting, compared to only 28% who felt it has.

A model for what the future might hold for Afghanistan if the U.S. withdrew comes from the Pech Valley. After U.S. forces withdrew, peace finally returned to the valley. The New York Times was mystified, despite acknowledging in passing “…the absence of foreign troops as an irritant…”

“When Americans were here and were driving around or patrolling the area, nobody looked at them as friends or liberators,” the Times quoted Hajji Yar Mohammed, a tribal elder in nearby Manogai District, saying. “Everyone in the villages was trying to fight them for the sake of jihad.”

If the U.S. wanted peace, it would stop making war.