Under Obamacare, insurers are forced to charge the same premiums to the healthy as the sick, which creates a perverse incentive to limit patient choice to a smaller network of doctors willing to accept lower fees.

Under Obamacare, insurers are forced to charge the same premiums to the healthy as the sick. John C. Goodman explains the perverse incentive this creates:

If the healthy are overcharged so that the sick can be undercharged, then insurance companies can expect to make profits on the healthy and losses on the sick. This means that it is in the self-interest of every insurer to attract the healthy and avoid the sick.

How do they do that? Well, to keep premiums lower, they are limiting health care access to smaller networks of health care providers who are willing to accept lower fees.  This might attract healthy individuals who shop on price and don’t care so much about the choices or quality of care available, but it probably wouldn’t sound like such a great deal for those who require a lot of care. It is by keeping away those most in need of health care and limiting choice and quality that insurers are managing to keep premiums lower.

As a result, we are getting a race to the bottom on access—with private plans in the exchanges looking increasingly like Medicaid, just as they do in Massachusetts. The Obama administration doesn’t seem to be bothered by this development. In fact they have been touting the fact that the premiums have been lower than expected, even though the reason is that the networks are narrower and skimpier than expected.

I Have Seen The Future, And It Is Medicaid

Under that title, he shows this chart: 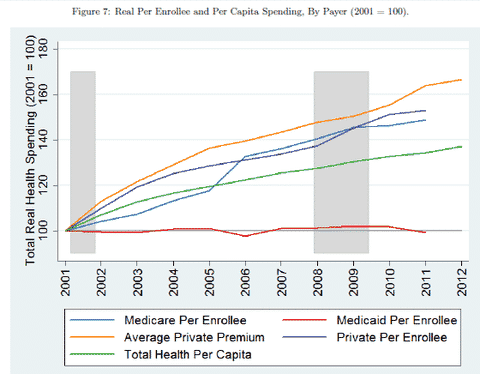 That flat red line at the bottom is Medicaid…. [W]e have ample evidence that we do know how to control health costs. Every other advanced country does it better than we do — and Medicaid does it far better than private insurance, and better than Medicare too. It does it by being willing to say no, which lets it extract lower prices and refuse some low-payoff medical procedures.

Hilariously, David from Indianapolis replies in the comments:

“The flat red line is Medicaid.” Paul, As a physician who accepts all Medicaid patients, I can tell you why that line is flat. When I finished residency in1992 and began my practice in anesthesiology, Medicaid paid $13.88 per anesthesia unit (an archane and outdated method of reimbursement for anesthesia services which I will not try to explain here). Now, 21 years later, the Medicaid payment per anesthesia unit is still $13.88. Did you get that? In 21 years, there has not been a ANY increase in the Medicaid reimbursement for my services. None. Not even an adjustment for inflation over the past 21 years. $13.88 in 1992, and the same $13.88 in 2013. That does make a nice, flat line. But it is meaningless.

Actually, it is quite meaningful, inasmuch as it illustrates why fewer doctors will accept Medicaid patients. On this point, back to Krugman’s post, he comments:

Oh, is it! He goes on to propose a solution to Medicaid’s “problems of access”. What is his solution? Why, just make all insurers operate like Medicaid! His argument is that “if most of the health insurance system were run like Medicaid”, then “doctors wouldn’t have so many patients able and willing to pay more”.

Which is nonsense. Krugman is arguing that the government should engage in price fixing by forcing all insurers to keep premiums low by paying low fees to doctors and limiting choice. What he means to say is that patients able and willing to pay more for better care wouldn’t be able to find doctors to provide it unless they paid out of pocket.

Krugman next tries to dismiss “complaints about reduced choice” by saying “we can actually control costs pretty well, while maintaining a universal guarantee, by slightly reducing choice and convenience”.

Of course, Krugman also thinks that despite the disastrous opening of Obamacare’s insurance exchanges through its website, HealthCare.gov,