Did the Fed Save Us from a Deeper Recession?

The New York Times suggests the world should be grateful to the Federal Reserve for preventing a deeper recession, but this overlooks two key things.

In recent years developing countries like Brazil complained that the United States and other industrialized countries were waging a “currency war” against them by artificially driving down the value of dollars, euros and yen. Now officials in some nations, like Argentina and Turkey, are blaming foreign “vultures” and “the interest rate lobby” for the sharp depreciation of their currencies.

…But their anger is misplaced. There is no foreign conspiracy against the Argentine peso, the Turkish lira or other currencies that have fallen against the dollar. The Federal Reserve’s recent decisions to slow its bond-buying program have strengthened the dollar. But most of these currencies have declined primarily because of domestic problems.

…Blaming the Fed is particularly misguided. Its bond-buying program, which was always meant to be temporary, has lowered interest rates and offset some of the damage from the financial crisis, though not nearly enough. Had the Fed not intervened, the global economy would have suffered a much deeper and longer recession.

This suggestion that the world should somehow be grateful to the Fed for saving us from a worse recession overlooks two key things:

1) The Fed caused the recession in the first place with its inflationary monetary policy to push down interest rates, which fueled the housing bubble that precipitated the financial crisis and recession when the bubble burst.

2) By preventing the necessary market correction and trying to do even more of the same that caused the problem in the first place, only on a massively greater scale, the Fed prevented a deeper but shorter recession from occurring at the cost of prolonging the agony and setting the economy up for yet another crash that will be all the more severe. 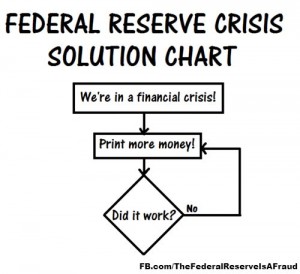