Krugman Begs the Question: Why Isn’t the Labor Market Clearing?

Krugman's argument that paying people not to work isn't exacerbating unemployment just begs the question of why the labor market isn't clearing.

On the topic of the cancellation of extended unemployment benefits, Paul Krugman writes in a recent blog post:

Ben Casselman points out that we’ve had a sort of natural experiment in the alleged effects of unemployment benefits in reducing employment. Extended benefits were cancelled at the beginning of this year; have the long-term unemployed shown any tendency to find jobs faster? And the answer is no.

He is referring to this graph from Casselman’s post on Nate Silver’s new FiveThirtyEight (which, as a tangential sidenote, Krugman has repeatedly criticized): 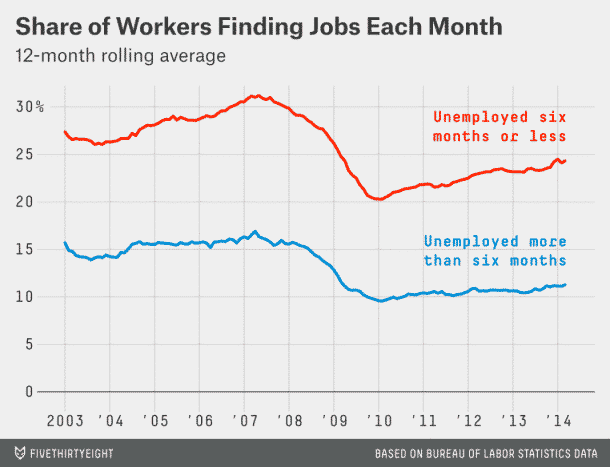 But Ben Casselman also points out:

Three months is too small a sample to draw firm conclusions. These calculations are based on the Current Population Survey, which only includes about 1,400 long-term unemployed workers in its sample each month and which doesn’t distinguish between those receiving benefits and those who, for whatever reason, don’t qualify.

Of course, Krugman doesn’t point out that Casselman points this out.

Krugman is also careful not to explicitly deny that people respond to incentives such that effectively paying them not to work exacerbates unemployment. After all, Krugman himself points out in his own economic textbooks that:

In addition, public policy designed to help workers who lose their jobs can lead to structural unemployment as an unintended side effect. Most economically advanced countries provide benefits to laid-off workers as a way to tide them over until they find a new job. In the United States, these benefits typically replace only a small fraction of a worker’s income and expire after 26 weeks. In other countries, particularly in Europe, benefits are more generous and last longer. The drawback to this generosity is that it reduces a worker’s incentive to quickly find a new job. Generous unemployment benefits in some European countries are widely believed to be one of the main causes of ‘Eurosclerosis,’ the persistent high unemployment that afflicts a umber of European economies….

But now, Krugman argues, things are different. He continues:

[H]ow was it, exactly, that reduced benefits were supposed to encourage employment in the first place?

The answer is, of course, that it removes the incentive not to work. But Krugman puts it this way:

Making the unemployed miserable arguably increases labor supply, as workers become less choosy and more willing to take whatever job they can find. But the US labor market in 2014 isn’t constrained by supply, it’s constrained by demand: given what firms can sell, they have no need for as many hours of work as workers are willing to give.

In other words, even if people collecting unemployment benefits wanted to work and went out to find a job, they wouldn’t be able to find one anyway because employers just aren’t hiring. There just isn’t any demand for labor. Or, to put it another way, there is a surplus of workers.

The problem is that this explanation of Krugman’s isn’t an explanation at all. It just begs the question: Why isn’t the labor market clearing?

What do I mean by that?

This is the market clearing price (also sometimes referred to as the “equilibrium” price). It’s the law of supply and demand.

So the question, again, is: Why isn’t the labor market clearing? Well, simply stated, if — as Krugman asserts — there is a lack of demand for labor (or a surplus of labor, if you prefer to look at it that way), it is a logical truism that the cost of labor must be above the market clearing price.

Well, this begs a further question: Why is the labor not reaching a clearing price? Why don’t wages adjust downward so that everyone who wants to work at that wage is able to get a job?

The answer is fairly self-evident. The price of labor can’t adjust downward because government has engaged in price fixing of wages. Which is to say, government has outlawed jobs. Government has made it illegal for employers to hire below a certain price anyone who would rather work at that price than not have any job at all.

After all, as Krugman himself has pointed out:

Basic supply and demand analysis says that things like that [i.e., “mass unemployment”] aren’t supposed to happen: prices are supposed to rise or fall to clear markets. So what’s this apparent massive and persistent excess supply of labor? In general, market disequilibrium is a sign of prices out of whack….

What is Krugman’s answer to this self-evident trusim? As I’ve pointed out before, the best he can do — as he calls for increasing the federally mandated minimum wage — is to deny that the law of supply of demand applies to the price of labor (see here.)

Of course, the guy who argues that wages violate the law of supply and demand is Paul Krugman the partisan hack. Paul Krugman the economist, on the other hand, points out in his own economic textbooks:

Or, as Krugman the economist has pointed out elsewhere:

So what are the effects of increasing minimum wages? Any Econ 101 student can tell you the answer: The higher wage reduces the quantity of labor demanded, and hence leads to unemployment….

Incidentally, the title of Krugman’s recent post is “Supply, Demand, and Unemployment Benefits”. As though he was instructing his readers about supply and demand in the labor market.