Obamacare: ‘Liberating’ Americans of Their Wealth (to ‘Solve’ Problems Created by Government in the First Place)

Paul Krugman hails Obamacare as "liberating" Americans by purportedly solving a problem that was actually created by government in the first place. 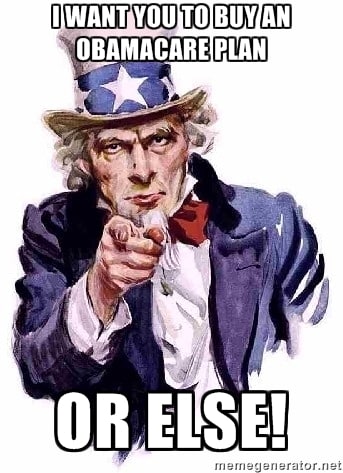 Paul Krugman rejects that Obamacare violates individuals’ liberty and asserts instead that it is “a liberating force for many Americans.” His argument is that

the pre-ACA system drastically restricted many people’s freedom, because given the extreme dysfunctionality of the individual insurance market, they didn’t dare leave jobs (or in some cases marriages) that came with health insurance. Now that affordable insurance is available even if you don’t have a good job at a big company, many Americans will feel liberated — and this hugely outweighs the minor infringement on freedom caused by the requirement that people buy insurance.

Of course, one of the means by which the ACA benefits some people is by using government force to, um, “liberate” wealth from one group of people (e.g., the healthy) in order to redistribute it to others (e.g., the sick), to force the former to pay higher premiums in order to subsidize insurance for the latter.

That is, it forces one group of people to labor for the benefit of another group.

Which is pretty much the definition of slavery — Krugman’s assurances that “Obamacare won’t turn into a form of slavery” notwithstanding.

Please try to keep in mind that government unconstitutionally forcing individuals to participate in the market against their will for the benefit of other constituents and special interest groups is just a “minor infringement on freedom”.  No big deal. Go back to sleep now.

But why do we have employer-provided insurance in the first place?

Then there is the fact that the problem Krugman is railing against above is not a problem that arose on the free market. This goes to the whole purpose of the individual mandate, the means by which Obamcare enslaves some individuals for the benefit of others.

See, in 1942, Congress enacted the Stabilization Act, in which they had the brilliant idea of preventing businesses from having an advantage over their competitors by attracting workers with higher wages. With legal limits in place on how much they could increase wages to attract labor, businesses started instead offering their employees health insurance in lieu of more pay.

At the same time, hospitals struggling during the Great Depression had created a third-party payer system , which the government treated preferentially for the benefit of this special interest group, encouraging employer-provided insurance by treating it is a tax-deductible business expense (see also this paper, page 198), which employees were also fine with since they didn’t have to pay more income tax on it as they would if they received higher wages instead.

Anyone buying insurance on their own, on the other hand, had to do so with after-tax dollars.

So we can see that the problem that Paul Krugman discusses above of people being afraid to leave their job lest they lose their insurance and risk not being to get back onto another insurance policy because they have in the meantime developed some “preexisting condition” was a problem created by the government in the first place.

Krugman, naturally, won’t tell you that, because it just doesn’t jive with his mantra about how we need more government intervention to “liberate” us by legislating away all semblances of a free market in health care.